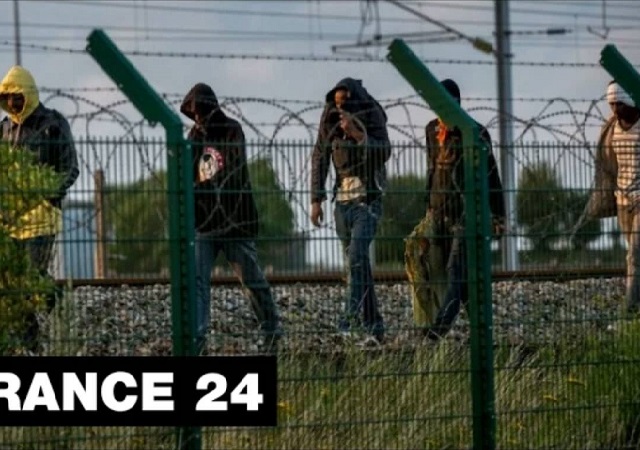 The stand-off between Britain and France intensifies as French Interior Minister Bernard Cazeneuve calls Britain to take in more ‘migrant children’ from the Calais-based migrant encampment saying that they “want to live in the UK”.

In an unconventional move, the French minister wrote a column in British newspaper The Guardian on Monday directly addressing British people and making a passionate plea on behalf of ‘minors’ currently camping in Calais. However, the average age of these ‘minors’ is 25.

France has finally decided to raze the encampment near its northern port city of Calais that has become a bridgehead for around 7,000-10,000 migrants who hope to get illegally into Britain by stowing away in trucks, ferries, and cars travelling through the Channel Tunnel.  The encampment covering some 4 km² has earned the byname of ‘Jungle’ and is notorious for incidents of rampant crime, rioting, and rapes.

The rising popularity of Right-wing Front National has now compelled France’s Socialist President Francois Hollande to rein in on the anarchy in Calais ahead of 2017 presidential election.

French government would like to see most of the migrants camping in Calais to move over to Britain. France along with its liberal mainstream media have been lamenting the plight of ‘migrant children’ living in squalid conditions in Calais Jungle.

British government has begun taking in some of these ‘children’ but their arrival has caused a public outrage as they hardly look anything like the impoverished children that media and politicians talked about. Even the British Home Office figures confirm that two-thirds of Calais ‘child refugees’ are in fact adults.

[T]hey will arrive on UK soil amid a spiralling controversy over Theresa May’s child refugee policy, with critics claiming that many of the all-male arrivals being photographed arriving look like adults.

The Home Office insists that all of the refugees coming to Britain have been vetted and are aged 14-17. But it has emerged that no medical checks have been carried out of the new arrivals, meaning that there is no way to be sure of their true ages. (…)

And serious questions are also mounting over why “hulking” young men are being brought over first instead of young boys and girls, who are the most vulnerable group in the Jungle camp. (…)

Express.co.uk has asked the Home Office how many places it has made available for girl refugees from the Calais camp, but officials have so far refused to answer repeated requests for comment.

One has to be a privileged European Liberal to see a “Humanitarian Crisis” in tens of thousands of able-bodied men camping on a beach front property in their search for a better welfare system. Having been born poor in a Third World country, I take matters of poverty and human misery with utmost seriousness — this isn’t one of them.

Meanwhile, British Home Office refuses to disclose the number of migrant ‘children’ arriving from Calais — in what a British newspaper described as an “information blackout”.

British Home Office, responsible for migrant relocation, has also refused to conduct dental or other medical tests to ascertain the correct age of these supposed ‘minors’, with an official calling them “too intrusive”. A facial analysis puts the average age of arriving ‘refugee children’ at 25.

The migrants ‘rescued’ from the French Jungle Camp are reportedly all males.

This should serve as an eye-opener to those in the U.S. still waiting to welcome “widows and orphans” prophesied by President Obama. As things stand, they will have to make do with an army of ‘children’ with thick facial hair looking a decade older than their given ages.

[Cover image coutesy France24, YouTube] [Author is an analyst based in Germany]

Throw another baby on the barbie, dodos, twilighters, and irredeemables. It’s survival of the fittest.

Again, this has nothing to do with abortion. Stick to the topic at hand.

What amazes me is that France let these people into the country, and now want to push out the problem onto another nation. Just another reason why we cannot let our sovereign status here in the states be compromised by the bleeding heart left.

So about this ‘vetting’ of immigrants that’s supposedly so accurate and detailed. It explains ten year old boys with beards, right?