Brexit: Teresa May Vows to Trigger Article 50 By End of March

Brexit: Teresa May Vows to Trigger Article 50 By End of March 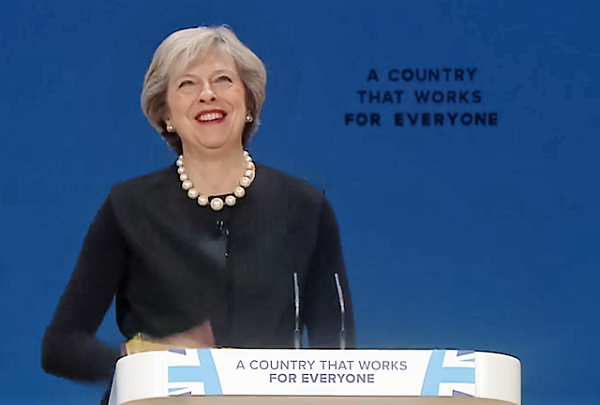 In her speech at this weekend’s Conservative Party conference, UK Prime Minister Teresa May revealed her plan to trigger Article 50 by the end of March next year and details of a “Great Repeal Bill” intended to repeal of the 1972 European Communities Act.

Article 50 starts a two-year process to leave the European Union (EU), and the 1972 European Communities Act “allowed Britain to join what would become the EU the following year. It also enshrined the supremacy of EU law in the UK, making the European Court of Justice [ECJ] the ultimate arbiter in legal disputes.”

Theresa May has confirmed she will trigger article 50 before the end of March 2017, setting in motion the two-year process of leaving the European Union.

The pledge by the prime minister means the UK will leave the EU by spring 2019, before the next general election, with the prime minister also announcing plans for a “great repeal bill” to incorporate all EU regulations in UK law as soon as Brexit takes effect.

May told the BBC’s Andrew Marr Show on Sunday she wanted to give “greater degree of clarity about the sort of timetable we are following” over the process for leaving the EU, as well as committing to enshrining workers’ rights in British law.

In opening speeches at Conservative party conference in Birmingham, May and the Brexit secretary, David Davis, will announce the government’s plan to repeal the 1972 European Communities Act, the law that binds EU law to the British statute book, and new legislation to transpose EU legislation into British law, in its entirety,

That law will only come into force on the day Britain leaves the EU, with future governments then able to unpick those laws as desired.

The Telegraph further explains “the Great Repeal Bill” proposed by May.

Addressing the Conservative Party Conference for the first time as leader, Mrs May will on Sunday declare that her Government will begin work to end the legislation that gives European Union law supremacy in Britain.

In its place, a new “Great Repeal Bill” will be introduced in Parliament as  early as next year to put power for the nation’s laws back into the hands of MPs and peers.

. . . .  She said on Saturday night: “We will introduce, in the next Queen’s Speech, a Great Repeal Bill that will remove the European Communities Act from the statute book. That was the act that took us into the European Union.

“This marks the first stage in the UK becoming a sovereign and independent country once again. It will return power and authority to the elected institutions of our county. It means that the authority of EU law in Britain will end.”

Mr Davis, who is charged with leading the negotiations as Secretary of State for Exiting the EU, will explain the decision during his speech.

“EU law will be transposed into domestic law, wherever practical, on exit day,” he will say.  “It will be for elected politicians here to make the changes to reflect the outcome of our negotiation and our exit. That is what people voted for: power and authority residing once again with the sovereign institutions of our own country.”

The “Great Repeal Bill” will allow Parliament to keep those parts of EU law it thinks best for the UK and to discard those it disapproves.

The “historic” piece of legislation will allow Parliament to write parts of EU law it wants to keep into the British system while discarding unwanted elements. Government sources hope the move will show that ministers want to give Parliament a say on the Brexit process and will open negotiations up to parliamentary scrutiny. However, the process is not without risk.

A majority of both MPs and peers will need to vote for the Bill for it to pass, raising the prospect pro-EU Lords could hold up its progress.

I really hope that leaving the EU is just the beginning, that the UK goes on to drop all its politically correct liberty-strangling domestic and immigration policies in due course.

You never get everything you want in politics.

But I’ll be really happy to see Great Britain exit the EU — and the sky stubbornly fail to fall.

May seems like a good, smart lady who is determined to follow the will of her people.

I hope she keeps on as she’s been going.