“If Billy had been passive or responded ‘Shut the f— up’ to Trump, Billy would have been out of a job the next day.” 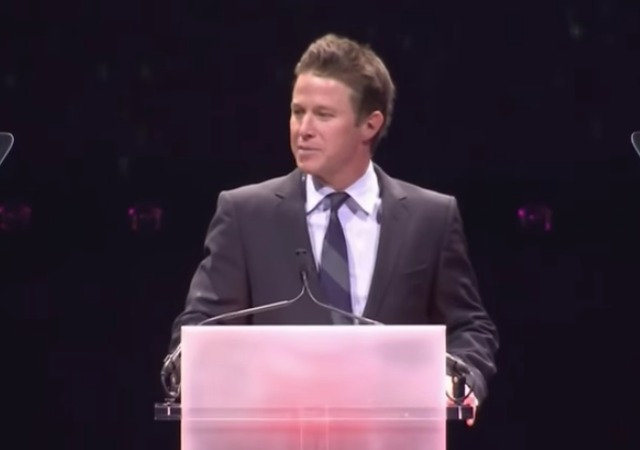 NBC suspended Billy Bush after he appeared on the controversial audio with GOP presidential candidate Donald Trump, but the two will not separate nicely. Bush hired Hollywood power lawyer Marshall Grossman, who immediately when on the attack:

Bush, Grossman says, was an NBCUniversal employee interviewing an NBC star in The Apprentice’s Trump, so he wasn’t exactly in a position to challenge his interview subject.

“If Billy had been passive or responded ‘Shut the f— up’ to Trump, Billy would have been out of a job the next day,” Grossman, a partner at Orrick in Los Angeles, tells The Hollywood Reporter.

Some have said that Bush appears to encourage and egg on Trump as the then-host of The Apprentice talked about the ability to grab women and kiss them because of his star status.

Bush, who appeared on Access Hollywood and Today, received a suspension after The Washington Post published the story. One source told CNN Money that Bush “will never be on the show again” while another “confirmed Monday that his return is unlikely.”

The network recently promoted Bush to co-host of Today, even relocating him to New York and giving him a multi-million dollar contract. One of those sources, though, thought Bush would apologize on air on Monday, but officials at NBC suspended him on Sunday:

A couple of hours later, the executive in charge of “Today,” Noah Oppenheim, said in an internal memo that the executives had decided to go even further and suspend Bush.

“I know we’ve all been deeply troubled by the revelations of the past 48 hours,” Oppenheim wrote.

“Let me be clear — there is simply no excuse for Billy’s language and behavior on that tape,” he wrote. “NBC has decided to suspend Billy, pending further review of this matter.”

Bush also thinks he has the upper hand “because he had told NBC colleagues about his Trump conversation at least as far back as August, when he was covering the Olympics in Rio.”

NBC News sources have insisted news division management — chairman Andy Lack and Today senior vp Noah Oppenheim — did not learn about the tape that captured Bush and Trump on a hot mic and offcamera engaged in a misogynist and predatory conversation until early last week.

“NBC News did exactly what you would expect from a great news organization,” an NBC spokesperson said in a statement after the tape was released. “As soon as we saw the tape and made the assessment it was undoubtedly newsworthy, we moved quickly and deliberately to get it published and to do so in the most responsible way.”

As today’s morality requires, men will be punished for being men. Had Billy Bush reacted like a little girl, he would have been fine.

And TMZ says the NBC producers were aware of the video in August, during the Rio Olympics, but chose (conspired?) to sit on it until it would do the most damage to Trump’s campaign.

It was “leaked” one month to the day before the election, and 48 hours before a “must-win” debate. Coincidence?

I seem to recall the last time they selectively edited a tape to make one person look bad, it didn’t turn out so well … for NBC.

If you ask me, it’s retaliation against the GOP, after the GOP withdrew consent to allow NBC to air or moderate debates because of NBC’s shenanigans during the GOP primaries. But NBC has built themselves a reputation in recent years — a pattern of behavior, if you will — of taking sides in politics and manufacturing news where there should be none.

So, he felt he would have been fired for not objecting the? Fired now because he didn’t.

Remember, Trump was a Democrat then, so fired if objecting – Democrats can do no wrong, ever. Trump is a Republican now, so fired for not. Republicans can do no right, ever. And since Billy is a Bush, all the easier to eject.

If it weren’t for double standards, Democrats would have no standards at all.

But it really is *one* standard, isn’t it? Heads, Democrats win; tails, Republicans lose.

Billy humored Trump for the same reason the women he assaulted didn’t press charges: wasn’t worth the trouble.

BB is experiencing typical leftist utilitarian behavior. He was useful as an employee until he was more useful as a suspended employee.

People working with the left should understand that they are only tools. Early supporters of the French Revolution lost their heads later on after their utility ended. The ruling class is the “inner party” and they only let useful others into the “outer party” temporarily.

Billy was a moron for bragging about the tape. He should have kept his mouth shut. He thought he could deal with the left. What a fool.

I’m not into conspiracies, but there is so much circumstantial evidence that this was well coordinated.

And to me the treatment of Billy Bush is likely a lot less about Bush and NBC and any attempt at appearing “righteous”. It is simply a second avenue to keep the tape alive in the media and throughout the chatting class.