“I’m not sure anybody is more qualified than Hillary Clinton.” 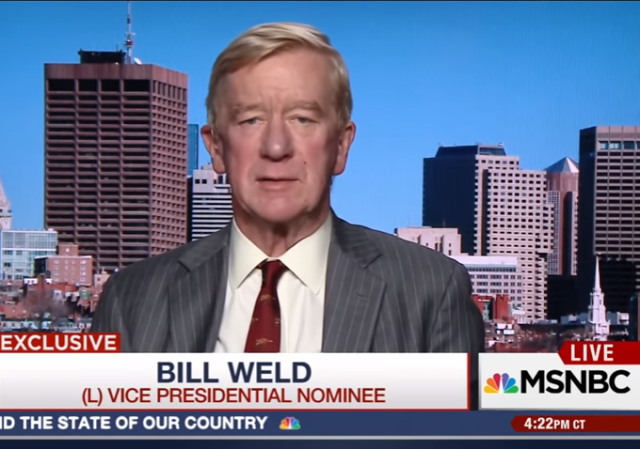 Former Massachusetts Governor and current Libertarian Vice Presidential candidate Bill Weld has a new political mission and surprisingly, it has nothing to do with helping Gary Johnson win the presidency.

Weld simply doesn’t want Trump to win, so he plans to focus on attacking him.

The Libertarian vice presidential candidate, William F. Weld, said Tuesday that he plans to focus exclusively on blasting Donald Trump over the next five weeks, a strategic pivot aimed at denying Trump the White House and giving himself a key role in helping to rebuild the GOP.

Weld’s comments in a Globe interview mark a major shift in his mission since he pledged at the Libertarian convention in May that he would remain a Libertarian for life and would do all he could to help elect his running mate, Gary Johnson, the former Republican governor of New Mexico.

But things have changed. Johnson has committed several high-profile gaffes in recent weeks that revealed apparent weak spots in his foreign-policy knowledge. Meanwhile, Trump had seemed to be surging back into contention after he fell well behind in the polls in early August.

While Weld insisted he still supports Johnson, he said he is now interested primarily in blocking Trump from winning the presidency and then potentially working with longtime Republican leaders such as Mitt Romney and Haley Barbour to create a new path for the party after the election.

Weld recently appeared on MSNBC and said he doesn’t think there’s anyone more qualified to be president than Hillary Clinton.

As you watch the video below, notice how Chuck Todd is obviously trying to get Weld to admit that the Libertarian ticket could be a spoiler for Hillary and to agree that would be terrible.

Allahpundit of Hot Air summed this up perfectly:

What a curious strategy for a third-party candidate who knows full well that his ticket is drawing more from Clinton’s voters, especially young left-leaning voters, than from Trump’s. That being so, logic dictates that you should maximize your vote share by attacking her, not him. Calling Trump a unique evil who must be stopped could backfire by convincing millennials who are leaning towards Johnson to reconsider and vote for Clinton inste—

Ah yes, another libtard from the People’s Republic of Taxachussetts.

“…a strategic pivot aimed at denying Trump the White House and giving himself a key role in helping to rebuild the GOP.”

At least D.P. Moynihan made some sense when sauced.

“I’m not sure anybody is more qualified than Hillary Clinton.”

Qualified for the slammer.

Any one of my cats is more qualified to be President than Hillary, Head of the Clinton Crime Family.

1. Who?
2. Real smart put yourself at odds with a sizeable portion of the
Republican party so you can lead the GOP to the promised land. You
really think they will want you to lead them?
Then after that, alienate a sizeable portion of the independent
vote, so if you do get a sizable portion of GOP behind you, they
won’t have a chance of winning.
3. Romney and Haley Barbour and the Bushes have had their chance.
They made a big hash of things. What makes them think they can do
a better job the second time?

Its like a puppy dog barking at the moon.

This guy is about as Libertarian as Stalin was.

Libertine LiberalLite this time around, sadly.

If I’m voting for someone that’s going to vote like a Democrat, then Ay Gad I want a professional. It costs no more to vote for the genuine article.

He is taking the same view that the US army did after the fall of the Third Reich. They need “Qualified” administrators to run the new Germany so they hired the old Nazis. It made many people sick to think that we had gone to war to kill them and then the pragmatists came along and put them back in charge! This will be like hillary taking over the government that she and her scumbag husband and their corrupt cronies have milked like a three legged cow for decades. There is not one office that they have not tainted with their evil and greed.

If a man is known by the enemies he makes, I would say Trump is doing pretty good. The democrats hate him, the media hates him, establishment / RINO republicans dislike him a lot, and the Taliban wing of the conservatives really hates him (that may not count since they hate everybody – mostly themselves). Trump threatens a lot of apple carts and gravy trains.
Go Donald! This is what a revolution looks like. If you want one, join it! If you want change, now’s your chance. If he loses, the establishment will join ranks (left and right) and there won’t be another chance for 40 years.

Great gawd, you hate conservatives and their principles!

Hillary’s rags,
it’s called reading comprehension. You can take courses in it. I never said I hated conservatives or their principles. I said the Taliban wing of the conservative movement hated Trump.
I realize that in the fantasy world of ragsland the truth is warped to fit the current fantasy, but in my world truth has value, so I won’t play along with you.

“If he loses, the establishment will join ranks (left and right) and there won’t be another chance for 40 years.”

There are other options but you will probably not like those either.

Are you calling the Tea Party the Taliban wing of the conservative movement? Them’s fighting words right there.

He HATES conservatives and our principles, as he demonstrates here most days. Just a ThoughtPolice goon for his man-crush cult leader.

thanks for the thoughtful, well reasoned reply. I will give it the consideration it deserves.

It wasn’t a reply, you stupid liar.

Hillary’s rags,
Of course it was a reply. A comment is a reply. Not only that, you gave buckeyeminuteman a perfect example of a Taliban conservative in action. Thank you.

Your mental health seems to have declined precipitously since Ted came out for Trump. Maybe we should start calling you the Texas DeRangeder. Prof might have to ban you for your own protection.

There is no such thing as a “conservative Taliban”. That’s just you reaching for…and missing…a broke-dick pejorative.

You can…and will…call me any stupid name you can conjure, being the Collectivist ThoughtPolice stooge you have demonstrated you are.

I suspect you have more to fear from being “banned” than do I, since our host is also one of your “Taliban”.

I’ve always wondered about your constant name calling. It’s so junior high school. Most people outgrow it. I reluctantly went along with it in our conversations, but it seemed strange. I’ve also noticed that as you become more emotional, the more you revert to anti gay slurs. And then it clicked. You’re still trying to work out that whole gender identity thing. It must be hell not knowing whether to go to work in wing-tips or 3″ heels. Anyway, I’m sure the whole LI family will support whatever pronoun you decide to use.

When you first demanded that I stay and keep in touch with you I thought it was just selfishness on your part. Now I see that it was a cry for help from a tortured, conflicted soul. Don’t worry. Through thick or thin, whether the road is rough or smooth, I’ll be right here.

I’m happy to let that stupid, lying, bullshit hang right there, for everyone to see.

The question “Why would Bill Weld support Hillary?” can be answered fairly easily with “If Bill Weld supported Trump, would he even get a tiny fraction of the positive free press he’s getting now, and would the vengeance wing of the Democrat party hold such a position against him for the next thousand years?”

Interesting how anybody who supports the known liar is suddenly ‘principled’ and ‘courageous’ in all of the press reports.

See Hit and Run on this. Weld isn’t a libertarian (although he wasn’t a bad governor), but the Globe piece seems to be aimed at reassuring whoever reads the Globe (all 12 of them) that Hillary can expect some help.

That’s interesting. I hadn’t realized that Weld considers himself a member of the annointed illuminati. But if he does, his statement that Hillary is qualified for the Presidency makes some sense; despite her obvious and catastrophic faults, she is the candidate of the oligarchic class.

The Congress of Vienna set up a system by which only the scions of a very small set of the royal and aristocratic houses of Europe could be monarchs of European countries. This was an attempt to shut the barn door after the horses had left and Napoleon had come in. As a member of a family of very minor Corsican nobility, he would not have qualified to declare himself Emperor of France under the terms established by the Congress. The system did have the advantage that run-of-the-mill adventurers could never fantasize about duplicating Napoleon’s career; only adventurers from a very small population could do that, and that by itself reduced the danger to vanishing point.

Unfortunately the US has no such system. Here, any grifter can, in principle, set her sights on the Presidency. And as long as the other grifters who are already in government convince themselves that she’s “one of them” they won’t see any dire danger in allowing her to sell the nuclear codes to the highest bidder contributor to her Foundation.

Really, Bill? Because I can think of some people who are more qualified.

It all comes down to judgement. In Weld’s case his poor judgment by joining Johnson on this ticket. On the other hand, Tuesday’s VP debate showed us Trump’s good judgment in selecting Pence and Hillary’s / Obama’s poor judgment with Tim Kaine.