BDS Co-founder Omar Barghouti: “the right of our people to the 1948 lands is in danger”

BDS Co-founder Omar Barghouti: “the right of our people to the 1948 lands is in danger”

The mask that BDS is about the post-1967 territories dropped, bookmark it and quote it. 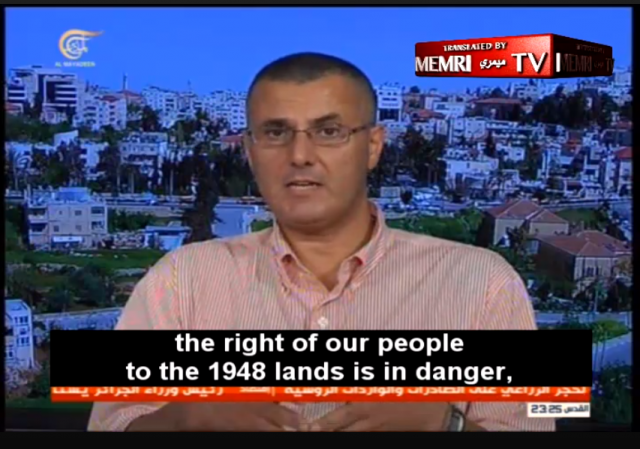 Omar Barghouti is the co-founder of the BDS movement. He lives in Israel because he married an Israeli woman and is a Ph.D. student at Tel Aviv University. [*] Yet he supports the academic boycott of Israel.

Contrary to Barghouti’s narrative, the BDS movement was founded at the anti-Semitic 2001 Durban Conference, not by a gathering of Palestinian civil society groups in 2005. The 2005 boycott call, co-founded by Barghouti, was simply window dressing designed to trick naive Western liberals into thinking BDS is about social justice and equal rights.

In fact, BDS is about destroying Israel and, in their minds, reclaiming not just the territory re-captured by Israel in 1967, but all of Israel.

BDS in its literature, again to fool naive liberals, plays coy with what it means when it says it wants an end to Israeli occupation of “Palestinian lands.” That allows groups like Jewish Voice for Peace and the U.S. Campaign to End to Israeli Occupation to claim that BDS only is about liberating the post-1967 territories. But that vagueness also allows BDS to appeal to those who do not accept the existence of Israel within any border.

That latter goal, the elimination of Israel within any border, is the goal of the BDS leadership. And Barghouti just admitted it on Lebanese Mayadeen TV, where he made clear that BDS was about liberating “the 1948 lands.”

The BDS movement was launched because of the ongoing failure to protect the rights of the Palestinian people. Some of these rights were frittered away: The Right of Return is in danger, the right of our people to the 1948 lands is in danger, and even the right of our people to the 1967 lands. Some of these rights are ignored. The BDS movement was created in 2005, in order to focus on the elimination of the occupation, on the elimination of the system of racial segregation – the Israeli apartheid – and on the right of the refugees to return to the homes from which they were expelled.”

The video is below. In it Barghouti tries to tie the BDS demand to destroy Israel to the Black Lives Matter movement. This is a tactic to direct racial animosity toward Jews under the doctrine of intersectionality, If you are surprised #BlackLivesMatter joined war on Israel, you haven’t been paying attention.

There also is a lot of other nonsense in the interview, such as overstating BDS’s success and impact on the Israeli economy. When it comes to Barghouti and BDS, don’t take anything they say at face value.

The most important statement in this video, however, is Barghouti admission that BDS seeks the “1948 lands.” That means the extermination of Israel within any borders. The mask dropped, bookmark it and quote it:

Update: Researcher extraordinaire Nurit Baytch points out that this is not the first time Barghouti has stated his opposition to a Jewish state in any form or boundary.

Omar Barghouti: "We oppose a Jewish state in any part of Palestine."https://t.co/xd10s5ht26@CAMERAonCAMPUS @LegInsurrection

Omar Barghouti: "If the occupation ends, would that end your call for BDS? No"https://t.co/WKAEYCRK0E@CAMERAonCAMPUS @LegInsurrection

———–
* Note: A reader emailed me indicating that Barghouti may no longer be in the Ph.D program at Tel Aviv University. Whether he still is there or not, he still was enrolled at a university he demands others boycott.

when the U.S.A. was just the original 13 states, there were people who desired more freedom and adventure. eventually it became 50 states from sea to shining sea.
What is wrong for Israel to live ‘from the River (Jordan) to the Sea (Mediterranian) which was less than the biblical Israel ?
The Balfour Declaration has already been destroyed in intent with the creation of the heshimite kingdom – that is 2 lands for 2 peoples. Why are the leftists allover the world so intent on having 3 lands for 1 arab people ?

Waitaminnit! The U.N. proposed partitioning the British Mandate into two parts. One part for Jews the other for Arabs (note there wasn’t any ‘Palestinians’ yet). The Jews accepted, the Arabs rejected.

Nooooo-pa. It’s pretty much extinct. Not endangered. Done. Kaput. Over. Like it never existed…

Right on, Rags! “To the victor belong the spoils” said by New York Senator William L. Marcy, referring to the victory of the Jackson Democrats in the election of 1828.

And as Roger Miller sings, “The Code of the West you must do unto others,
Do unto others before them others do it unto you.”

He never mentions the property And homes lost by Jews in Arab countries.

Had I been President I’d have told Israel back in 73 when they turned the war around to keep all the land they won. I’d have told the Arabs tough crap, you started it, Israel finished it.
And I’d have given them even more military aid.

Our people??? His people????? He’s a Qatari by birth, a multi-millionaire who grew up in Egypt and later moved, as expected from the hypocritical BDS, to a better and freer life in Jaffa in Israel as an adult, where he has studied (as a paying student of Tel Aviv University) for his Masters and currently for his PhD.

He NEVER answers why he chose Israel seeing as he wants everyone else to boycott the country and its products, citing the unbelievably weak “his own personal reasons” for so doing.