At some point do down-ballot Republicans argue “Vote for me as check on President Hillary”?

At some point do down-ballot Republicans argue “Vote for me as check on President Hillary”? 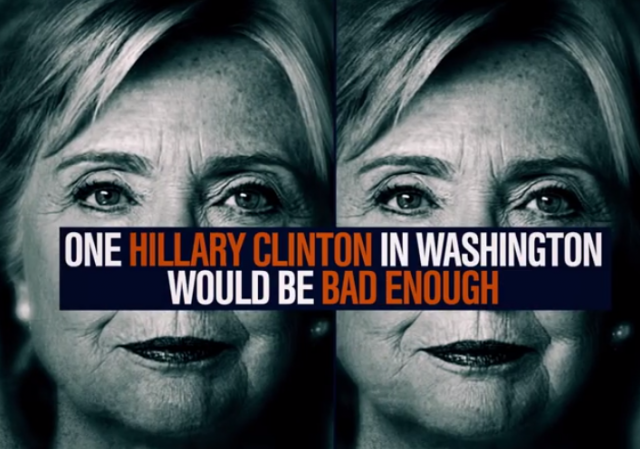 While the polls mostly look grim for Trump as of today, two weeks can be a lifetime in politics.

At some point do down-ballot Republicans all but concede that Hillary will win, and argue that a vote for the Republican House or Senate candidate is needed as a check and balance on future President Hillary?

That’s what Republican are accused of already doing in the Missouri Senate race, which by many accounts may determine who controls the Senate. The current polling shows Republican Roy Blunt very slightly ahead, but it’s now considered a toss-up.

A new GOP ad in the Missouri Senate race acknowledges that Hillary Clinton is likely to be president and warns against sending a Democratic senator to join her.

It’s the latest example of an ad strategy that Republicans have begun employing as Donald Trump’s defeat looks increasingly likely.

Here’s the message: Elect Republicans to be a “check and balance” against Clinton.

The ads shows the Democratic candidate in Missouri, Jason Kander, morphing into Clinton and claims the two are identical on issues including immigration and liberal Supreme Court justices.

The narrator says: “One Hillary in Washington would be bad enough, reject Jason Kander.”

Here is the ad. It certainly doesn’t concede that Hillary will win explicitly, but it does suggest the argument that a check and balance may be needed:

There’s a danger in this strategy. While some down-ballot Republicans in blue-ish states have disavowed Trump as an electoral strategy, in reddish states that could mean the loss of Trump voters which would doom any Republican. For Roy Blunt and others, it’s an argument that can’t be made, which may be why it isn’t the Blunt campaign sending the message.

Let’s put the way Trump would:

Just to let people know. I found a way to reverse the damage. In anyone else needs help. Just think of Maria’s boobs.

I think I just invented an internet meme.

Says plenty. McConnell would rather retain his position and collude with Hillary than battle it out with Trump. That Blunt would participate in such a ploy is indicative of another gutless RINO.

Mark Kirk and a bunch of other Republicans couldn’t wait to abandon Trump and give us Hillary.

Indications are that Paul Ryan actually distributed the Bush tape to get Trump and planned to call for Trump to step down and Pence to step in. It blew up on him when Pence refused to appear with him.

There is actually a petition to remove Paul Ryan.http://www.ipetitions.com/petition/resign-traitor-ryan

IOW Republican’s have been a bigger help to Hillary then Hillary or any of her colleagues including Bernie.

Now you expect us to believe they will oppose her. Get real.

The wording is deceptive. It should be Senate Ad Admits That GOP Wants Clinton To Win … And They’re Working Hard To Make It Happen!

The GOP is a nice little country club for losers.

Nobody wants to vote for people who are determined to be losers. Ergo, this is not a good advertising theme for anyone who wants to win.

But the Republicans don’t want to win. So maybe it’s not such a bad ad after all.

Trump,is going to win this

Well, the Cubs just won the National League Pennant, so …!!

Damn it!
DJAH you beat me to it.

Almost every playoff game the Cubs this year was exciting.

Today they demolished Kershaw of all pitchers. The last giants game…
Even the game they lost to the Giants.

Remember your English grammar folks! “Would be” does not equal “will be.”

This is a good ad and helps Trump too by attacking Hillary at the same time it attacks Kander.

For a website that constantly points out media bias, don’t you think it is odd that they put so much emphasis and acceptance in “media polls”? The most accurate polls (and they aren’t media polls) four years ago have Trump currently ahead today.

If Republicans want to throw their lot in with Hillary, then there is no point voting for them. Paul Ryan has given Obama everything he’s ever wanted. We keep hearing that Hillary will be Obama’s third term… any evidence that House and Senate will act any different?

For close to two decades the Republicans in Congress have been the concubines of the Democrats. Just like in the campaign, Trump will have to fight both parties. So be it.

Several polls have stated about 55 % of people say she should have been indicted. Humans being humans ,if they were going to vote for her , they would have convinced themselses that she should not be punished.That tells me her ceiling is 45 which is about the highest any reputable polls have had .

I also believe a good many never Trumpers are just trying to have it both ways . They think that if they oppose the Vulgarian that the Dems and the media will cut them a break . Not gonna happen.
I have also seen several polls which state that Trump and Hillary both have 90 of their respective parties, and Trump is leading among independents by 11 % .
Since independants outnumber dems and republicans .( Most cite 38/I 33 D /31 R )I ask , since Trump is ahead with independents,how can he be so far behind in total.

It’s called Gell-Mann amnesia, they forget the Wilileaks where the Clinton team was working with pollsters to rig polls in the primary.

“They think that if they oppose the Vulgarian that the Dems and the media will cut them a break. Not gonna happen.”

Yup. Remember how the “Moderate Maverick!” John McCain sold out the base on issue after issue, hoping to mollify the MSM as battle-space prep for his own presidential run? Yah, that worked out swell.

“At some point do down-ballot Republicans …argue that a vote for the Republican House or Senate candidate is needed as a check and balance on future President Hillary?”

Will their argument include an appeal from a Nigerian Prince to give me a 10% finders fee for depositing his $10 mil in my account?

Because that would have more credibility.

The GOP will cave whenever Hillary steps over the line. And everyone knows it. It’s why no one respects their congressional hearings. Commit perjury? GOP caves. Ignore a subpoena? GOP caves. Tilt you nose and sneer at the chair with contempt? GOP caves.

If Hillary wins it will be because the GOP refused to get behind their nominee, even after making *him* sign a loyalty pledge.

I will not only laugh at GOP calls to control the House and Senate, I will go to work for the Democrat Opposition Research teams and help them tear the GOP down to the ground.

In fact, I seem to recall a private conversation with Sen. Roy Blunt on the squash courts. He spoke about how much he enjoyed “reaming” women, and stuff about whips and clamps that I won’t detail here.

Yes, its all coming back to me now. I may have even accidentally caught it all on video tape. Those stupid Iphones. I’m always clipping the record button by accident.

Reasonable strategy. Hillary won months ago, might as well capitalize on it.

Roy Blunt is a career politician who has always run as a conservative. He even voted against Obamacare. He also was one of the first Republican Senators to vote for cloture to end the Cruz filibuster and supports many of the establishment positions held by Senators such as Senator McConnell. And the voters know this. He caught a lot of negative press, at home, this year for his reluctance to repeal Obamacare. So, while it would be difficult for him to convincingly portray himself as an ally of Trump, it far easier to portray himself as being opposed to a potential Hillary Clinton presidential agenda. And, the most important aspect of a career politician’s life is getting elected and re-elected.

It would have helped if GOPe did less to alienate Trump voters (i.e. the base)…