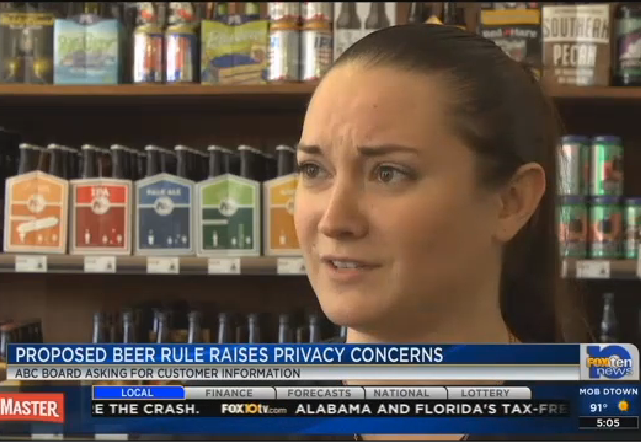 In August, I wrote about a proposed rule in Alabama whereby Alabama’s Alcoholic Beverage Control (ABC) Board wanted personal information on beer buyers.  The requirement that private citizens who buy beer for personal consumption provide their names, addresses, telephone numbers, and dates of birth was rejected; however, some troubling elements of the initial proposed rule stand.

For taprooms like Old Black Bear, the customer always comes first. So the idea of creating an extra burden for them at the register didn’t seem right.

“Just seemed like too much of a burden for them not to at least discuss it with somebody first to try and get our side of it,” Owner Todd Seaton said.

That burden was set to come in the form of a new requirement from the Alabama Alcoholic Beverage Control Board proposed earlier this month following a new law passed earlier this year. The law allowed breweries and brew pubs to sell beer for off-site consumption.

The new rule would’ve required them to record the names, addresses, telephone numbers and birth dates for those looking to take beer off site for consumption.

. . . .However after receiving a good bit of public comment, during a board meeting on Wednesday, the board decided against the rule . . . .

It should be noted that the ABC board left in place the 288 ounce per customer limit and the somewhat problematic requirement that customers must still provide their names and addresses.

This requirement, when written, was not intended to apply to private consumers (who were not then permitted to buy beer directly from the breweries).  The ABC board president, Bubba Lee, stated that because the law requires the collection of names and addresss, the board can not change this aspect of the rules.

Board Chairman Bubba Lee said after the Sept. 12 work session that he expected the proposal to be changed to require that the sellers record the names and addresses of the customers who buy products to take home, but not their phone numbers and birth dates.

Lee said the requirement to record the names and addresses of buyers is part of the state law and not subject to the board’s discretion.

Pacific Legal, who call the proposed rule “creepy,” weighed in on the ABC’s decision to abandon the rule while keeping in place the names and addresses requirement.

While the ABC Board rejected the proposed rule, it determined that state law still requires brewers to record the names and addresses of buyers.  In response, many pointed out that the law cited by the Board was intended to apply to manufacturers who sell to distributors, and has never been interpreted to require brewers to collect personal information of people who simply buy a few beers for later consumption.  If the Board does choose to enforce the requirement against breweries, state legislators have signaled their willingness to pass an amendment exempting craft breweries from the law.

For now, the decision was a victory—if a modest one—for privacy and economic liberty.  Because the issue got the attention of interested consumers and legislators, in the long run there will likely be no data collection requirement at all.

Creepy, and open to unforeseen abuse.

May Texas A&M put a whooping on Auburn and that Tidy Bowl team too. That’ll teach’em not to mess with the good beer.

But it’s raaaaacist to do the same when it’s voting.

Anyone named Bubba has to understand beer.