Excellent reminder why we stand for the national anthem. 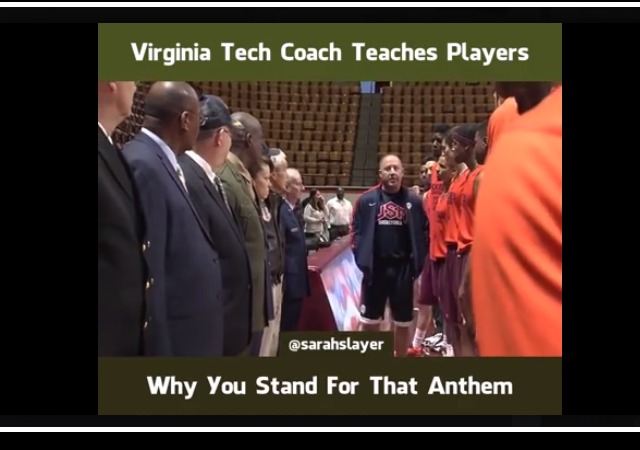 Kneeling during the national anthem has taken the sports by storm since San Francisco quarterback Colin Kaepernick began it during preseason to protest police treatment of black people. Other NFL players have done it along with high school football players.

But Virginia Tech basketball coach Buzz Williams will not have that behavior in his house. Instead, he chose to show his players why we stand for the national anthem. We do it to honor the men and women who sacrificed so much so we can enjoy our freedom at home.

Members of the military brought in chairs the basketball players usually sit in. Then veterans walked out and Williams asked them to stand in the chairs. He said:

These guys, when they were your age, interrupted their life, they paused their education, they changed their career, and they gave their life for those chairs. Do you guys understand what I’m saying? Not us. Not us. So when the anthem is played, we’re going to stand like grown men. And we’re going to honor men like this, that gave their life, so we can have a chair to sit in.

He also told his players they will stand at attention during the two in a half minute national anthem. He will not allow them to play with their shorts or adjust their jerseys.

Williams then plays the national anthem to show the players exactly how they will honor America and those that served this country so they can have the freedom to attend college and play basketball.

Towards the middle of the anthem, players and veterans started singing along.

Interesting how Megan Rainpoe isn’t subjected to the same hatred for doing the same thing Kaepernick is doing.

I’m sure that 3 or 4 of the nearly two dozen people who actually follow women’s soccer have done that.

Because 2 dozen people watch womens soccer that’s your reasoning for displaying racially motivated hypocrisy.The excuses you make for a white person who does the same thing as a black person,is so typical of your ilk. This is why I know You(MTED), Ms Chastain, On the Ragspierre and so many others aren’t angry at Kaepernick for hsi perceived disrespect of the military and LEOs.

Why would someone comment about a player who they don’t even know about?

Hey, Joe down the street from me said something racist. Why haven’t you commented on him yet m1?

You can’t even spell her name right, ya moron.

And it isn’t “hatred”. It’s disgust. Same for her as anyone else.

Hatred? No. The word you want is contempt. I feel that towards ALL Leftists. Neither Kaerpernick nor you are special.

Finally a coach with a heart and a big pair of brass ones.

If they want to genuflect to the Flag, that’s a suitable expression of respect. Sitting is unacceptable.

If I were the coach, I’d tell them they’re welcome to sit thru the national anthem if they wanted to do that. But, they’d also sit thru the entire game, and every game for the rest of the season. And good luck getting that scholarship next year, with no playing time this year.

Anybody know why the woman and two of the uniformed men do not have their hand over their heart?

They may be active duty. Regulations require standing at attention; hand over heart is a civilian display.

Thank you!
I assumed it was something like that.

Depending on the service, they may not salute indoors uncovered (without a hat). This may be dependent on whether they are under arms (with weapon). In short, trust those uniformed.

Active duty personnel, inside and uncovered (i.e., not wearing hats) are to stand at attention during the presentation of colors and performance of the anthem; no salute, no hand over heart. The kids that brought in the chairs appear to be VMI cadets, who are required to follow the same basic rules as active duty personnel, remaining at attention without saluting or covering their hearts. Those were the rules during my 22 years active duty (and for many years before) and I don’t believe they have been changed.

So, it appears that everyone behaved in accordance with all the applicable rules and regs.

Well, there was one Marine that was singing the anthem… I think we can give him a pass, though. I can’t read USMC ranks, but he had a lot of rockers.

I cannot make out what is in the center, but he is an E-9; either a Master Gunnery SGT or a SGT Major. That is the top of the line. The only higher enlisted rank in the Marines is SGT Major of the Marine Corps, who while technically an E-9 has seniority as the enlisted advisor to the Commandant of the Marine Corps.

Thanks… I was Army, so the fourth rocker threw me. We only learned to count above three for PT purposes. 😉

Those are not VMI students. Virginia Tech has a cadet corps of its own. VT is one of two colleges with a cadet corps that exists within a larger student body (the other one is Texas A&M). Schools like VMI are entirely cadets – you have to live the life in order to attend the school. At VT and TA&M, you live the life while the rest of your classmates are normal college students.

VT started out as a military school. They went to this hybrid model back in the 50s. I think. It’s been awhile since I gave campus tours, so I’m a bit rusty.

I’ve watched the Lady Gaga National Anthem from Superbowl 50 a number of times. What a voice! To bad she mostly goes for shock. It’s always touching to see some of the players mouthing the words along with her.

In July 2016 Joseph Mills truly disrespected our military. Joseph Mills was beating up his girlfriend when several people tried to help his battered victim. Mills pulled out a gun and fired,sending people away. Two soldiers Charles Allen Judge and Joseph Michael Prins hearing the shots ran towards the danger and tried to help the battered victim. For his Joseph Mills killed Charles Allen Judge and Joseph Michael Prins. Two soldiers killed trying to help a battered woman. I don’t recall this true disrespect of the military by Mills being covered here. I don’t recall Toni Lahren, Herman Cain,Kate Upton, James Woods,Tony LaRussa and so many people,that have kept the Kaepernick story going for a month saying one thing against a guy who murdered soldiers. Now this is no surprise to me,because I know racially motivated hatred now patriotism is the reason for Kaepernick disdain. If I’m wrong ,how is it a Mills(a killer of 2 military personnel)can receive less hatred,disgust,contempt,disdain,than Kaepernick(a person ONLY peacefully protesting)?

This other person acting badly, even horribly, does not excuse Kaepernick being an ignorant jackass.

If one person shots someone does that excuse another person of a lesser misbehavior?

ANd because many people don’t know who a women’s soccer player is, and didn’t immediately look up every single player, or specifically every single white player who may have done the same thing in every sport so they can single them out for opprobrium as well, doesn’t make it somehow racial. Kaepernick is well-known, did it publicly, and people know about him doing it. Therefore he is the one singled out. If some well-known white player had done and said the same thing first and been public about it he would have gotten almost exactly the same reaction and I suspect you very well know that. The race card is overplayed. THe problem is that he is an ill-mannered ignorant punk, and I don’t care a bit about the color of his skin.

In other words: Race is not a get out of jail free card where your offenses aren’t really offenses just because you belong to a pre-approved minority group. Sorry, I will have just as much contempt for you whatever your superficial skin deep racial characteristics happen to be.

Having lived here in Hokieland for quite a few years now (oh yes, and what a bunch of turkeys they can be) it’s nice to see a story about a coach and a team over there that doesn’t either smack of the usual google-eyed, lip-smackin’ pandering the local press usually puts out or involve the words “drugs” or “charged with.”

Coach Williams, you are to be commended, sir.

In 1943 the supreme court of United States ruled that the constitution States that no one didn’t have to stand for the national anthem or the pledge of allegiance.So is it the moral thing to do yes. Is it minority no.