“You’re not allowed to share hate language in a university.” 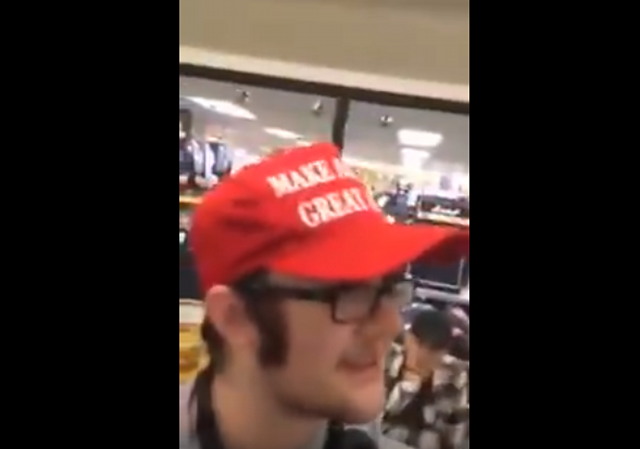 A student wearing a Trump hat at Mount Royal University in Canada was accosted by other students and told he had to remove it because it was “hate speech.”

The issues of free speech and safe spaces erupted at Mount Royal University Thursday after video surfaced of a man and a woman arguing over whether he should be allowed to wear a hat supporting U.S. presidential candidate Donald Trump.

The video, which had been viewed on Facebook more than 524,000 times as of Thursday afternoon, and was also posted to Youtube, shows a young man wearing a red hat with Trump’s slogan, “Make America Great Again,” being challenged by a young woman.

“You’re not allowed to share hate language in a university,” the woman, later identified as Zoe Slusar, the former vice-president of student life at MRU, is heard saying.

“I’m not allowed to support a political candidate?” the man, later identified as Matt Linder, replies.

A group soon gathers as an argument ensues over whether it is appropriate for him to wear it.

That’s what they do now. They label other people’s opinions as hate speech so that they can suppress it.

… All is progressing according to plan …

Time for “offending” students to play this card:

“The United Nations upholds intellectual freedom as a basic human right through Article 19 of the Universal Declaration of Human Rights which asserts:

“Everyone has the right to freedom of opinion and expression; this right includes freedom to hold opinions without interference and to seek, receive and impart information and ideas through any media and regardless of frontiers.”

So this chick is saying that in order to make America great we have to get rid of all the non-white people? Sounds a bit racist to me. I think she needs to go for sensitivity training.