VIDEO: Clemson Students Speak Out After Praying Stopped on Campus

VIDEO: Clemson Students Speak Out After Praying Stopped on Campus 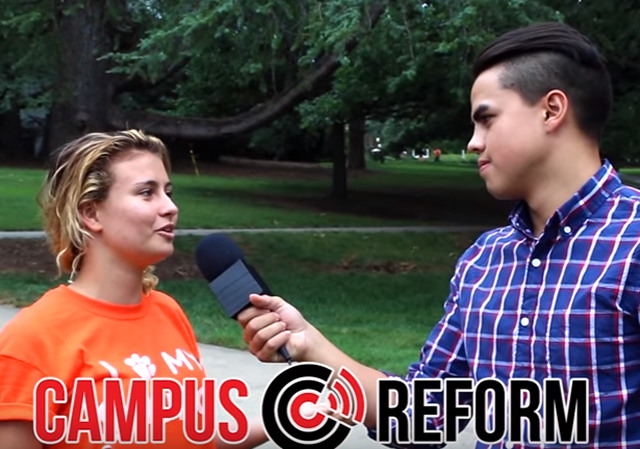 Last week, we posted a story about Clemson University in which a student and a man who was not a student were stopped while praying on campus. The administrator who stopped them claimed they weren’t in a free speech area.

The story went national because free speech is an ongoing issue on college campuses and also because Clemson is a public university, meaning the whole campus is a free speech zone.

Campus Reform reports that some students organized to speak out:

Several dozen students and local community members gathered at Clemson University Friday afternoon to protest against the administration for not allowing a man to pray with students.

The protesters gathered in the exact spot that Robby Roberts, the man praying with students, was told he could not hold a sign saying “Prayer.” Roberts joined the group on Friday, still defiantly holding up his sign.

Roberts expressed gratitude for all the support, noting that he has spent the last couple years at Clemson ministering to students by spending nights downtown outside the bars and offering prayer to anyone who wanted it.

“The fact that fellow Christians can gather here today and pray with me, and not be afraid or hide…I think that is how it should be,” Roberts observed, though he continues to question Clemson’s policy, which he feels does not allow sufficient liberties for outside organizations looking to minister to students.

“The policy concerns me because 99.99 percent of Christians are not affiliated with Clemson University, so if they were called to minister here, they’d have to first jump through the arbitrary and bureaucratic hoops that the university has put in place,” he pointed out. “They call it free speech, but once they finish dumbing it down, it turns into quite downgraded speech.”…

WeRoar, the organization that planned the demonstration, is a coalition of the Clemson chapters of Young Americans for Liberty, Turning Point USA, and the Tiger Town Observer.

“Our organizations joined together to advocate for free speech and allow for all ideas to be heard,” said Mitchell Gunter, a WeRoar member.

“I think if it’s a public university receiving taxpayer funds, it should be a free speech zone across the entire campus,” he added, opining that “too many college students are coddled by the culture of censorship at Clemson, as well as other colleges and universities, [and] I just think college students need to learn to be challenged and need to learn how to be offended.”

Campus Reform asked students for their thoughts on the situation and to their credit, many students understood the issue perfectly. Watch below:

It’s so refreshing to hear college students defend freedom of speech, isn’t it?

What probably helps Clemson is the fact that its location, the upstate of SC, is almost the epicenter of the “Bible belt” for the South or at least the Southeast. About 30 miles up the road in Greenville you’ll find Bob Jones University, for example. So public prayer is not likely to be shunned as quickly as many other places.

But the school will continue to be a focal point for those you want religion out of public life. This is the place where about 2 or 3 years ago they attacked the head football coach for having volunteer prayer meetings and, gasp!!, they had public baptisms for players that requested it. Can you imagine?? (sarcasm).

Public Universities shouldn’t find it is there job to police the speech of students/people on their campus in this way. It’s, on it’s face, inappropriate, but has somehow taken root on college campuses across the nation.

“Free Speech Zone” is such an Orwellian maneuver. “Safe Spaces” is along the same idea. It’s clear that college administrators think of themselves as shepherds and students are their cattle to be corralled and penned.

People who claim God doesn’t exist seem to be afraid of something that doesn’t exist, they need to see a shrink. They are so afraid of God that they believe a prayer will hurt them. How far will the Anti-Christian, Anti-American Left be allowed to go before people stand against them before it is to late.

That’s about the size of it. Every time I hear about someone’s “right to not be offended”, I’m tempted to give them the “Shrek” response:

“You HAVE the right to not be offended. What you lack is the capacity.”

The funny thing about feelings — including feeling offended — is that as an adult you control them, not the other way around. So, you don’t want to be offended? Great! Shrug it off. Keep an open mind. Don’t rise to the petty insults or “microaggressions” you think you see/hear. Deescalate, don’t escalate. If all else fails, ignore it and walk away. THAT is how you exercise your “right to not be offended.”

Can’t do that? Your problem, not mine. Grow up. Like Shrek says, you have the right; what you lack is the capacity.