Scarborough Circling Back Toward Supporting Trump? 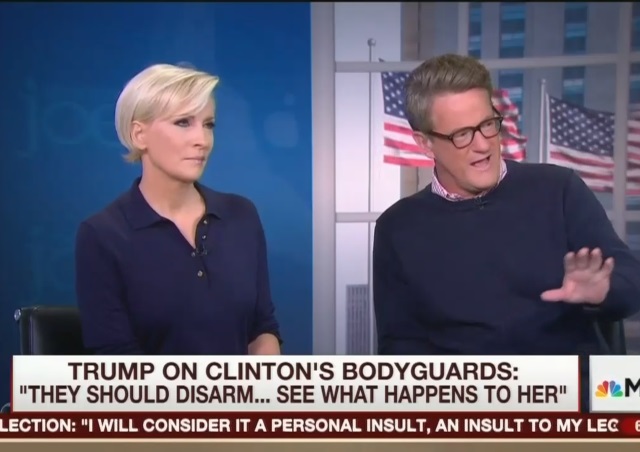 A current GQ article detailed something that this Insurrectionist, as a regular monitor of Morning Joe, had observed: that Joe Scarborough went from being a Trump booster during the primaries to a vitriolic critic of The Donald during the general election campaign.

But a trend I sensed last week continued on today’s Morning Joe: Scarborough seems to be swinging back in Trump’s direction. On a number of issues, it was Scarborough-against-the-panel in defending Trump. First, Joe noted how a reporter had teed Hillary up to criticize Trump for speaking of a “bomb” in NYC, whereas Hillary herself had spoken of “bombings.” Later, Scarborough alone rose to Trump’s defense over his suggestion that Hillary’s bodyguards be disarmed.

Scarborough was also less critical than the rest of the MJ chorus regarding the way Trump orchestrated his announcement that he believed Barack Obama was born in the US in a way to maximize airtime.

Joe even hit the hypocrisy of environmental activists who criticize Americans for driving pickups while they fly around in private jets.

So what’s happening with Scarborough? Is Joe seeing the handwriting on the wall, sensing the Trump train is on a path to victory, and doesn’t want to get left at the station?

MARK HALPERIN: Let’s see what happens to her if her Secret Service agents don’t have guns?

JOE: Okay, but your Secret Service agents are always going to have guns.

KATTY KAY: Right, but the implication of what he’s saying is let’s disarm those around her so she is vulnerable and therefore let’s see what happens to her. If she was in a position where she was not protected by guns.

JOE: See, that’s the thing. She’s always going to be protected by guns. And this argument, by the way, that somebody like Hillary Clinton, and this is the conservative argument. Hillary Clinton has had people around her with guns wherever she went since 1978. Since 1978. And for her to say somebody that wants to protect their family with a certain kind of gun shouldn’t have that gun and she’s been against handguns as well or her husband certainly was talking about a handgun ban back in the 1990s, seems to conservatives to be the same as environmental activists screaming at Americans for driving a pickup truck while they’re flying around the country in, you know, a Hawker 800 XL [private jet].

If it wasn’t for double-standards…

Very interesting: thanks for posting—might well explain the evident change in Scarborough’s tone.

The only reason Scarborough looks smart is because he’s sitting next to Mika and conversing with someone named Katty Kay. And the Smart Guy glasses. That, too.

You know Mark, what Scarborough thinks or says is of no interest to Trump or his supporters. The moron has stepped on his tongue so many times that any comment he makes will probably be rescinded the next day. I and many others have written him off as a PR hungry guy who is hoping for a big anchor job with a credible network. Unfortunately for him there are none and if there were they certainly wouldn’t hire this jerk and his retarded sidekick.

Inspector, please have a look at the link that Rags posted above. If what Scarborough says is of no interest to Trump, why did Trump invite him in for a chat to try to repair relations, and why did Trump regularly call into the show when they were on good terms?

LOL, do you think there is something wrong with “going after Mika on Twatter”?

Not me. I prefer people who will fight back.

Apparently you do as well, even fighting back against those that fight back…

And then hell froze over…

Rags link is interesting. Those two dim bulbs, joe/mika, however, have no clue.

Eh. Even the proverbial broken clock is right twice a day.