Two Hillary IT guys plead the fifth, one sings, and one defies Congressional subpoena, deciding not to show for the hearing 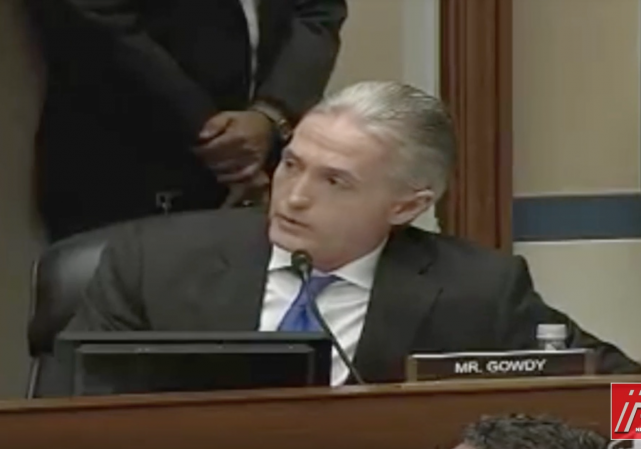 The IT crew that managed Hillary’s home-brewed server took the witness stand at a House Oversight Committee hearing Tuesday morning.

The whole ordeal would’ve been hilarious if not for the fact that this is real life and not a sketch from the Saturday Night Live archives.

The fifth amendment circus aside, one of the four tech guys, Bryan Pagliano, the former State Department employee who set up the server, defied Congressional subpoena when he failed to appear for the hearing.

Rep. Trey Gowdy was not exactly thrilled with Pagliano’s no-show:

Gowdy rightly questioned why when Pagliano had been granted immunity by the DOJ, he was in fear of self-incrimination before Congress.

Rep. Lynch, who kept referring to the DOJ as the FBI, suggested Pagliano was simply exercising his fifth amendment rights. “The gentleman from Massachusetts knows the fifth amendment doesn’t protect you from non-incriminating answers,” responded Gowdy.

The Hill has the breakdown of the exchange:

“I will consult with counsel and my colleagues to consider a full range of options available to address Mr. Pagliano’s failure to appear,” Chairman Jason Chaffetz (R-Utah) said. “When you are served a subpoena by the United States Congress, that is not optional.”

Rep. John Mica (R-Fla.) suggested that the committee could declare Pagliano in contempt of Congress.

Democrats pushed back fiercely, arguing that the committee is unfairly asking Pagliano to open himself up to criminal liability, pointing to an outstanding criminal referral from Chaffetz that asked the U.S. attorney for the District of Columbia to investigate deletions from the server.

“What we have done is put him under threat of criminal prosecution,” argued Rep. Stephen Lynch (D-Mass.). “It puts him in jeopardy coming before this committee while that criminal referral is in existence. He’s an American citizen; I know the Constitution gets in the way of this committee sometimes.”

“I want to read the agreement between the Department of Justice and this witness and whether that agreement requires this witness to cooperate with other entities of government — that is commonplace!” Gowdy shouted. “For them to say you can tell us the truth and not tell Congress makes no sense!”

As is always the case in Clintonland, the continual stonewalling leads to more questions and more speculation, not less.

Godspeed to the one man, Justin Cooper, aide to former President Bill Clinton who had the gall to answer questions.

What a sad state of affairs when We The People have to Pay for government employees/contractors to lie,steal and cheat us, WITH NO ACCOUNTABILITY !

Yep. The problem with stone walls is they work when you don’t have anyone with the hammer.

Without the DOJ and FBI, all Congress can do is investigate. Though I DO think the little puke who defied the subpoena should be held in contempt.

HER legacy is deplorable.

Fit only for the waste basket!

I saw what you did there…

I didn’t. What did I miss? (I’m asking this seriously…)

TFG, we obviously tag teamed using Hellary’s talking points against her. But I think Rags noticed that by working together we ended up making a nice Haiku, aka Japanese, style poem in the end. Very Zen. Here is the poem …

HER legacy is deplorable
Irredeemable, too
Fit only for the waste basket

The Clinton Inc employee knows he’s safe because the fix is in with the DOJ and the FBI.

And that there is absolutely zero chance that Gowdy or any other Republican will actually do something about it.

It is behavior like this that has been common during the clinton and obama administrations that make us all hate our own government. We all know that it is no longer there to protect us but to protect the elite of the political world and to punish THEIR enemies. Is there one agency in our government that any of us would turn to in a time of need? I remember the Nixon Watergate hearings and how it was a real hearing with both sides asking tough questions. Then Robert Bork came up for an appointment to the SCOTUS and the party line split came into being. Since then there has been nothing but cover-ups and delays from the Dems. The country no longer comes first. Re-election and party come first!

They should have had an officer waiting at his door to arrest him and bring him in. The Reps are so weak.

In fairness to Pagliano, had he testified he might have a fate similar to that of Seth Rich.

That said, Congress could hold him contempt and throw him in its brig (yes, it has one, but the Rs are too chicken to use it).

An epiphany of law and order for thee. We live in recycled times.

The committee should hold Pagliano in contempt of Congress. It doesn’t matter if he has immunity, or if that immunity is “limited”. He was issued a subpoena to appear. If his answers could possibly incriminate him and there’s any doubt whether his immunity would protect him, he can appear and plead the Fifth.

But to not appear at all is outrageous. Criminally so.

Question: Is failure to appear (or respond) to a congressional subpoena a violation of law? And if so, isn’t any request that congress makes to the DOJ just that, a request which may be ignored at the DOJ’s whim?

What iI don’t understand is why they had to put that scumbag Elijah Cimmings on all these committees. He is the biggest benefactor of the Clinton largess and should be not even considered. In fact, he should be be sitting in Leavenworth on treason charges.

May I suggest a bill for the next congress to consider . . . If you receive a paycheck from the Federal Government and you refuse to cooperate with a congressional investigation by invoking the Fifth Amendment, well that’s your Constitutional right. But that will be your last paycheck, and you can kiss your government pension goodbye also.

I call it the “Kiss Your Government Salary, Pension and Clearance Goodbye Act”.

He should be held in contempt. A subpoena compels a person’s appearance, not his or her testimony.

But I have a problem with imposing immunity in order to compel testimony. Back in the day, a defendant offered testimony in exchange for immunity, lesser charges, or leniency in sentencing – a voluntary act. Now the government imposes immunity immunity on people (involuntarily) and compels testimony. Citizens have a right to not be a witness against themselves (to use the language in the Fifth Amendment) as well as a right to not incriminate themselves (they are not the same thing – for a lesson on the difference see https://www.youtube.com/watch?v=6wXkI4t7nuc). In addition, SCOTUS acknowledged a right to remain silent (in Miranda as in the now-familiar Miranda warning), likewise different from “self-incrimination.” No right can be taken “without due process of law,” which is recognized as the judicial process of a trial, when the process results in a conviction. The best the government can do is offer immunity for testimony, it shouldn’t be able to impose it. In doing so it strips a person of a constitutionally-guaranteed right, among others, without “due process of law.”

Failure Theater. We saw it when Lois Lerner openly displayed contempt for Congress. No one takes them seriously, not even themselves. Sure, they’ll affect righteous indignation for the cameras, but every know they won’t do a damn thing about it. They’re a joke, and quite frankly, until the GOP finds its balls, these kind of hearings are a waste of time, energy and money. To say nothing of the insult to our intelligence.

Failure Theater. Go find the guy, arrest him for contempt, then throw him in jail. Otherwise shut up and quit wasting everyone’s time.

The Chair of the House Science and Technology Committee was also present to ask questions. When his turn came he stated that he had verified evidence that people working the the Clinton Foundation were actively coordinating the defense of all of these people in an effort to protect Hillary. This coordination included coaching witnesses, getting agencies to slow walk requested information, and so forth which all goes to show the extent of the Clinton corruption. I remain puzzled why no news agency (even Fox or the “internet wackos”) picked up on this and write an article on it.

Has anyone actually seen Pagliano lately? Wasn’t he looking a little depressed and didn’t someone hear he was buying new rope at the hardware store?