Obama Ushering In a ‘Post-American World’ 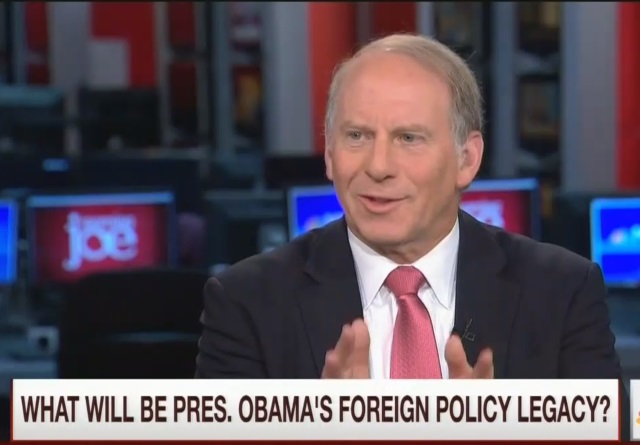 Richard Haass is the quintessential member of the foreign policy establishment. Long-time President of the Council on Foreign Relations, Haass has served in Republican and Democrat administrations and advised candidates from both parties. In this election, he has been very critical of Donald Trump.

So no taint of partisanship can be applied to the normally mild-mannered Haass’ scathing comments on today’s Morning Joe about President Obama’s UN speech of yesterday. After calling the speech a “major disappointment,” Haass unleashed the unkindest cut, saying of Obama’s detached attitude to the crises of the day “this is not the faculty lounge.” Ouch.

JOE SCARBOROUGH: What did you make of the president’s speech yesterday, Richard Haass, at the United Nations?

RICHARD HAASS: Short answer was I thought it was a major disappointment. The sporting equivalent would be running out the clock. There were no specifics about Syria.

JOE: Do you think it was one of his worst speeches before the — ?

HAASS: I do. I was really disappointed. I thought it was at 36,000 ft. Generalities. Almost dispirited and defeatist about what we couldn’t accomplish in the world at the time we’ve got North Korea on the precipice of nuclear issues, we’ve got Syria unraveling the way it is, these convoys getting bombed.

JOE: The chamber, all the reports I got also, one of the most dispirited UN chambers ever because of a lack of United States leadership.

HAASS: I think there’s a couple themes hovering over this United Nations gathering. One is exactly what we’re talking about here. The real sense of futility with Syria, the tragedy of it. Second —

JJOE: There doesn’t have to be a futility —

JOE: — if you have an American president who is actually willing to not let tyrants cross red lines and kill 200,000 people.

HAASS: What you’re seeing from Syria to questions over TPP is a sense of retreat from American leadership around the world. That concerns obviously about Donald Trump, what he would bring to it but all these things are adding up. Fareed Zakaria some years ago wrote a book about a post-American world. And what we’re seeing at the UN this week is what a post-American world would look like.

JOE: We’re actually seeing, general, are we not, the results of a president saying I’m going to usher this country into a post-American world?

MICHAEL HAYDEN: Joe, I think that’s exactly right. Let me differ just slightly with my good friend, Richard. I thought it was a very elegant speech in terms of its analysis of the global situation. But you know? Saying it hasn’t made it so since the first six days of creation.

And we have not participated in a meaningful way in a process that actually would help the circumstances on the ground in Syria and a whole lot of other places. Last week I mentioned there was difference in language between Mr. Trump and President Obama. You know, but there’s not a whole lot of difference between the Obama administration’s retrenchment and Mr. Trump’s America First. There are common themes there.

HAASS: About the analysis, though: this is not the faculty lounge.

If you haven’t heard or read the speech, there’s a nifty condensed version in that post.

Post-American World? Forget Zakaria….read Merk Steyn. The One Worlders have lived in a world stabilized, albeit with ups and down, for two hundred plus years by the Pax Britanica/Pax Americana. Hard fought for human values are being tossed away as they embrace the very form of governmental control that has proved so deadly to millions. Orwell was just off by a few years.

Obama is the ‘ faculty lounge ‘ POTUS.
It would have been better for the USA if that had been the case.

All Obama cares about is two things: the destruction of the America we know and love and his worthless legacy.

He does have a personal assassination program; not even LBJ went that far. But there’s precious little evidence that it’s accomplished anything useful. Even worse, there’s no evidence that it’s even happened at all. All we have is his say-so, echoed as always by the press, and that’s worth approximately nothing. “If you like your dead terrorist mastermind, you can keep your dead terrorist mastermind.” Uh-huh.

It was a great speech — for US foes and adversaries.

Obama’s Legacy:
1. He had a beer with a “stupid” cop and an absent-minded racist professor.
2. He’s got a son somewhere that looks like Trayvon Martin.
3. He has incited the riots in Ferguson, Baltimore, etc…
4. Every Caucasian is a racist.
5. U.S.A. Sucks!
6. (Others please add, I’m feeling a little deplorable & clingy.)

I still believe he wants to head up the u.n. Ruining the U.S. isn’t enough for the socialist p****.