“Powering through is what women do.” 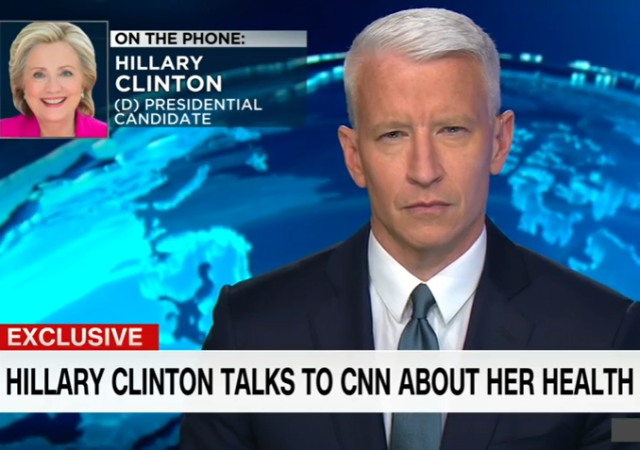 In the same way that Democrats and the media kept Hillary’s health out of the news until it could no longer be ignored, they’re now working together on the explanation.

Clearly, someone sent out a memo which suggested the words “power through” should be used in every response.

…Then on Sunday, Clinton’s plan to “power through,” as her top aides later called it, finally unraveled. She abruptly left the Sept. 11, 2001…

Hillary powers through pneumonia — because that’s what women do

As the cover of nearly every newspaper and news site in America made abundantly clear Monday morning, Hillary Clinton, the Democratic candidate for president of the United States, cut short her appearance at 9/11 memorial ceremony on Sunday and later disclosed that she’d been diagnosed on Friday with pneumonia. In a more normal world and in a more normal year, that information might receive a public round of supportive get well wishes, and then we’d move on. But these, as we are painfully aware, are not normal times…

Powering through is what women do.

Hillary’s running mate must have been at the meeting, too. Via Real Clear Politics:

Tim Kaine: Clinton Is Going To “Power Through” Pneumonia, Like She Did With Coughing Fit On Labor Day

Kaine said he reached out to Clinton as soon as he heard about her “overheating” at the 9/11 memorial ceremony in New York City on Sunday. “Hillary has a very strong work ethic,” he said. “Her sense was… ‘Maybe I can manage it. I’ve got [pneumonia], but I am going to power through it.'”

Hillary used the term on CNN:

And finally, a compilation from the Washington Free Beacon:

Iowahawk noted the sheer coincidence of it all:

Professor Jacobson points out that this is a derivative of the woman card:

As Ed Driscoll suggests at Instapundit, it’s like Journolist all over again.

When you see stupidity and ignorance being normalized to this degree, take cover for a big storm. The big short and the dot com bubble got nothing on these people.

We have safe spaces for trigger words and ISIS is executing prisoners on meat hooks. I don’t think the collision of these two ideologies will go well.

One of the meme’s I’ve seen said hateful hillery should have been made to wait 13 hours before going for help.

When men do it, it’s called denial.

Deplorable (can I say that…???) and, indeed, ridiculous as this homogenized BS is, it’s just bidness as usual for the Mushroom Media.

Odd. Most women I know do whatever necessary to get better as soon as possible.

True, but the VERY weird and artificial world of a POTUS campaign is unique.

This is especially true when you have a whole cottage industry of conspiracy theorists speculating about your health.

she’s seriously ill, and her “pneumonia” is a symptom of her underlying disease state, not the cause. same with her refusal to drink water.

So, your learned diagnosis is “hydrophobia”…???

You people are so funny!

I think his diagnosis is super secret alcoholism.

Drudge has a link claiming that Hillary was being administered a neurological test while waiting for the van.

I noticed the woman doing something weird with her before and wasn’t quite sure what it was. I wrote it off as reassuring her with physical contact but that didn’t seem quite right. I didn’t know that was her doctor, which apparently it is.

I don’t know that it is an exam per se, but it is some “medical thing”. Perhaps a way of getting Illary to focus.

The need for a quick ad hoc neurological test would be consistent with the issue I observed.

The first step she attempted to take was very similar to the first step someone tries to take after their leg has fallen asleep (due to sitting in wrong position) For the typical individual, the leg “falling asleep” is due to the temporary pressure on the nerves. Her right leg was jerky at the start of her first step as if the muscles were not getting the complete signal from the brain.
Keep in mind, she has had multiple missteps, trips, and falls.
She may have a low grade version of Pneumonia, but that only aggrevated a pre-existing condition

A determination was made some time ago by Clinton and her operatives that, regardless of the reality of her poor physical condition, she would at all times project the appearance of a youthful and vigorous candidate.

Similarly, four years ago during the Benghazi attack, a determination was made that reality would not be allowed to contest the narrative, foisted upon the public by Obama and Clinton, that ISIS and other terrorists were on the run.

In both instances, lies were put forth to distract the gullible media and the public from the truth. Then, additional lies were constructed to obscure the original lies. And so on, until enough time will have elapsed to merely dismiss the entire matter as “old news”.

This is how they roll. For at least the last 30 years.

Glad to see Johnny Dollar chime in here with the often forgotten, but true explanation.

As to the first…

EVERY pol makes that same determination. Think “Plugs Biden”. Or the blond ferret glued to Der Donald’s bald pate. Or Nanny “Tuning Keys” Pelosi. In our culture, any successful pol has to look “youthful” as they possibly can, and project an image of vigor. FDR knew that.

The second point is dead on. Hellary was liable for the safety of a cabinet-level official of the United States, and she left him out to die.

Then she bald-faced lied about it, and does to this very day.

I guess I just cannot stand another 4-8 years of a president whose personal credibility is so minimal that I regard every utterance to be a lie until proven otherwise.

If she was only lying about her health, I could probably give her a partial pass. But, it’s everything, all the time.

Their first, and last instinct, is to lie.

Always true of anyone in public life named “Clinton”.

Remember how we always said of Dollar Bill “he’d rather climb an tree and tell a lie than stand on the ground and tell the truth”?

Both of them, and now it appears Chelsea is another one.

Johnny: Is this the Keeping Up Appearances Matter? Will it be one of the five part series broadcasts, or will it fit in one episode? :-{)}}}

Dear me, yes! It is one of my “go-to” channels on XM, along with 40s Junction, Bluegrass, and Sinatra, along with a few others.

Those J.D. Marathons can make a long motor-trip go quite fast.

I would have administered the classic neurological test of telling Hillary to pull on my finger.

She’s obviously able to be treated by some of the best around. It would be quite interesting to know what their diagnosis was, as well as their prognosis.
This is more likely what she’s attempting to “power through” than pneumonia.

I would agree, however, that all this is about one thing, power. It’s the glue that holds the Clintons together.

Speaking of ladies, Ivanka now unveiled her federal maternity leave plan which she promised at the convention to the applauding audience of Republicans.
With Republicans like this, who needs Hillary?

The Clinton cover story will become old news just as long as there’s no recurrence in the next two months.

And if she can match Trump’s appearance schedule.

In other words, you are predicting Hillary’s health will be an ongoing issue all the way through Election Day?

Hillary has a very low bar now. If she doesn’t collapse in public and doesn’t cough too much, she will win.

Not exactly the best thing to be reminded of in a presidential candidate.

A couple of points:

First, the weather in New York City that morning was mid 70s, up to about 77 or so, during the ceremony. The humidity was moderate (all this according to weather.com).

I’m not sure how many people were at the ceremony. Perhaps other people became overheated. But I don’t think the NYC emergency departments were crowded that day with heat exhaustion complaints.

So the “overheating” (even if one is wearing a Mao-style pantsuit) doesn’t work.

Second, pneumonia is a serious issue, particularly in people over 65. There is a significant risk of death and complications. There is a reason why, in a bygone era, it was labeled, “the old man’s friend”. While it’s certainly possible to treat an elderly patient with an uncomplicated viral or bacterial pneumonia outside the hospital, that requires antibiotics, rest, fluids, and careful attention. I have read that Hillary’s personal physician was with her on 9/11 and helped evaluate her at the curbside. I think it was a mistake on that doctor’s part to allow Hillary to continue with her schedule. From the time the diagnosis was made, Hillary should have been on home-rest, and damn the consequences.

I won’t speculate on Ms. Clinton’s underlying health. I’m comfortably certain that I’m being lied to.

“First, the weather in New York City that morning was mid 70s, up to about 77 or so, during the ceremony. The humidity was moderate (all this according to weather.com).”

To add to you comment – Weather.com showed a 7-8mph NW wind, a quite pleasant /medium cool wind.

” I think it was a mistake on that doctor’s part to allow Hillary to continue with her schedule.”
I suspect the doctor couldn’t stop her. Hillary couldn’t think straight, but she was determined not to stop.

She was determined not to stop?

What, was someone waving a $5 bill? Evil and vile, same letters, best description of hateful hillery.