Yet, professor who issued the disinvite claimed she was warned that the “BDS faction on campus will make matters very unpleasant” 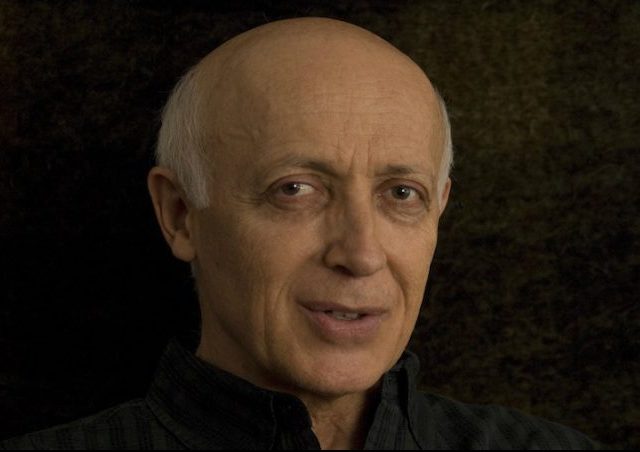 The controversy over the disinvitation of Shimon Dotan, an Israeli filmmaker and NYU professor whose film was to appear at a conference next year at Syracuse University, continues to reverberate and grow.

The background is set forth in prior posts: 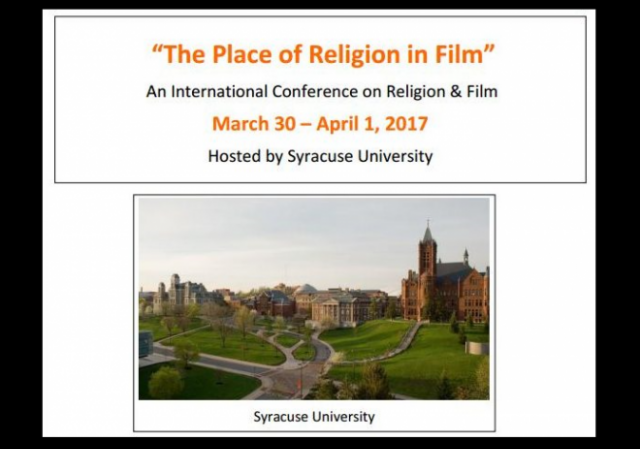 The short version of the story is that Syracuse professor Gail Hamner said in an email to Dotan that she was warned by colleagues that if Dotan participated in the conference the “BDS faction” on campus would make his life and hers “very unpleasant.” The email, available in full in my prior post, read in part (emphasis added):

Syracuse’s administrative response has centered on portraying this as an error in judgment, and promising to have Dotan show his film on campus through some other mechanism and group. There has been no public focus by the university, so far, on the role that BDS faculty play in creating an atmosphere of fear and intimidation such that the mere invitation of an Israel to show a film on campus is problematic.

But there have been calls for just such a focus, including by Syracuse Prof. Miriam Elman (who also writes for Legal Insurrection), who has been quoted widely and was interviewed in Algemeiner, Syracuse U Professor Slams ‘Hypocritical’ Colleagues for Rescinding Invitation to Israeli Academic/Filmmaker:

The events related to Dotan, Elman said, are part of a series of “silent stealth boycotts by a small, yet determined group of BDS activists.” What makes the BDS presence at Syracuse even more unique, she told The Algemeiner, is that “we do not have a Students for Justice in Palestine (SJP) and all boycott activity is faculty driven.”

In Hamner’s email to Dotan rescinding the invitation, the Syracuse professor made reference to the university’s Women’s Studies Association (WSA). According to Elman, Vivian May, who heads the Humanities Center at Syracuse and is the president of the National WSA, “just signed a few months ago in support of the academic boycott against Israel.” When the university refused to join in the academic boycott two years ago, “Women’s Studies as a unit submitted a letter of protest,” Elman added.

“You can see how deep this anti-Israel hatred goes,” she said.

Elman is now part of an increasing number of Syracuse faculty — who also wrote a “joint letter of apology to Dotan for the university’s lack of courtesy, insult and embarrassment” — calling on the administration to investigate why the filmmaker’s invitation was withdrawn.

“Faculty at Syracuse has crossed a line by boycotting all and any type of Israeli related programming,” Elman told The Algemeiner. “It’s not just about targeting the Zionist Right, but also progressive leftists and those who advocate for coexistence and Israeli-Palestinian engagement. They don’t want Israelis on our campus, period.”

The events as Syracuse, Elman said, “are an important example of where BDS has gone.”

“If the BDS movement says it is against the ‘occupation,’ then why doesn’t it want to host a movie that talks about ending the ‘occupation?’ Dotan is not anti-Israel enough for its members. BDS only supports people who will scream from the rooftop that Israel is an apartheid, genocidal and racist state. This says a lot about what the BDS movement wants students to know,” she said.

“A small group of faculty is depriving us of our rights and we will not tolerate this,” Elman declared.

Articles about the controversy appeared initially at The Atlantic, and also among others, The Daily Orange, Inside Higher Ed, The Chronicle of Higher Education, Syracuse.com, Haaretz, The Jerusalem Post, Heat Street, Truth Revolt and Reason. The student Editors of The Daily Orange criticized the disinvite in an Editorial.

The pro-BDS faculty must be feeling the heat, because a Petition is being circulated denying that BDS exerted any pressure to disinvite Dotan.

The Petition, which as of this writing purports to be signed by 31 Syracuse University faculty and graduate students, is being promoted by the Syracuse-based Palestine Solidarity Collective (PSC). 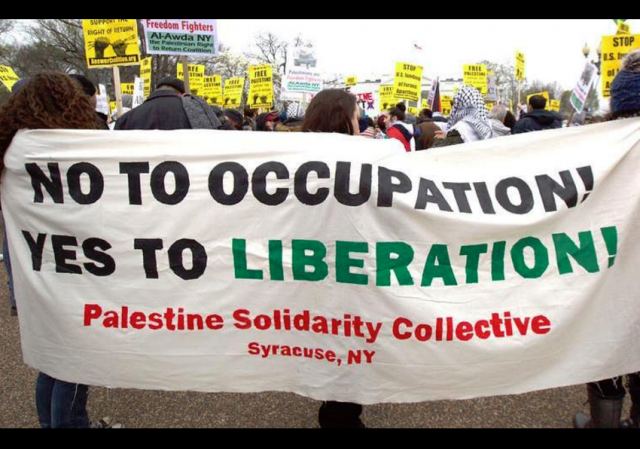 PSC is an anti-Israel group that appears to be active on Syracuse University’s campus. PSC used this poster, featuring a cartoon by the notorious Carlos Latuff, prize winner in the Iranian Holocaust Cartoon Contest, to promote the BDS movement: 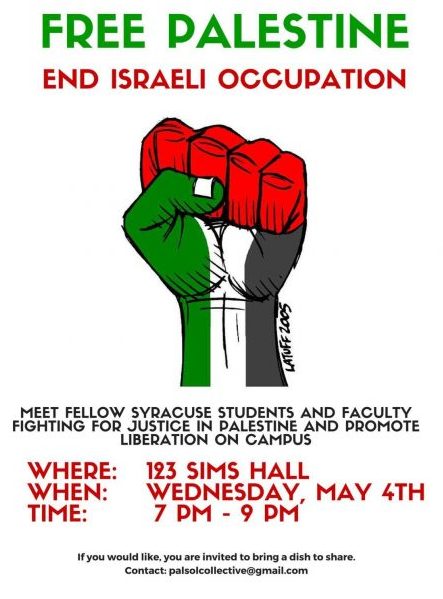 The Petition with regard to Dotan appears on the PSC Facebook page: 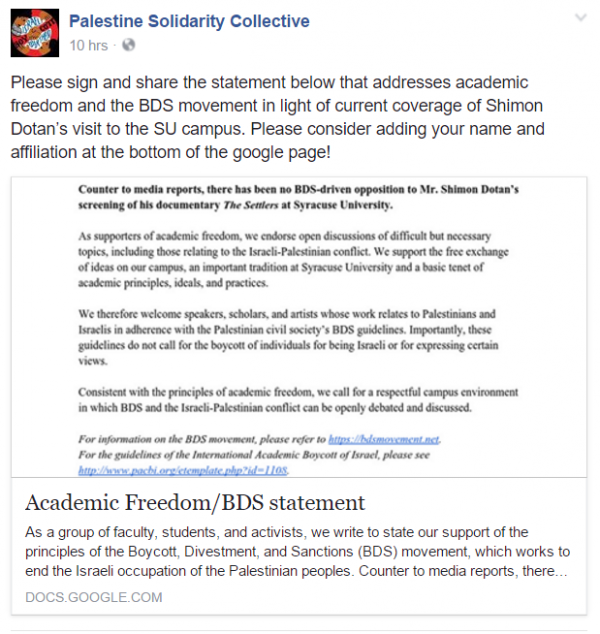 The text of the Petition is as follows (bold in original, underlining added):

As a group of faculty, students, and activists, we write to state our support of the principles of the Boycott, Divestment, and Sanctions (BDS) movement, which works to end the Israeli occupation of the Palestinian peoples.

Counter to media reports, there has been no BDS-driven opposition to Mr. Shimon Dotan’s screening of his documentary The Settlers at Syracuse University.

As supporters of academic freedom, we endorse open discussions of difficult but necessary topics, including those relating to the Israeli-Palestinian conflict. We support the free exchange of ideas on our campus, an important tradition at Syracuse University and a basic tenet of academic principles, ideals, and practices.

We therefore welcome speakers, scholars, and artists whose work relates to Palestinians and Israelis in adherence with the Palestinian civil society’s BDS guidelines. Importantly, these guidelines do not call for the boycott of individuals for being Israeli or for expressing certain views.

Consistent with the principles of academic freedom, we call for a respectful campus environment in which BDS and the Israeli-Palestinian conflict can be openly debated and discussed.

For information on the BDS movement, please refer to https://bdsmovement.net.
For the guidelines of the International Academic Boycott of Israel, please see http://www.pacbi.org/etemplate.php?id=1108.

Note the language: ” in adherence with the Palestinian civil society’s BDS guidelines….” Those guidelines require the boycott of any individual who is a representative of an Israeli university, or who engages in so-called normalization. That is, an Israeli is permitted to appear but only if that person frames all dialogue in terms of the goals of BDS.

PSC set forth the requirements to prevent normalization in an article posted on its website, Normalizing the Israeli Occupation of Palestine at Syracuse University:

The Boycott, Divestment, and Sanctions (BDS) guidelines put forth by the Palestinian Campaign for the Academic and Cultural Boycott of Israel (PACBI) call on people around the world to resist “normalization projects.” These are initiatives, events, or activities that present a false sense of equality between the oppressors/colonizers and the oppressed/colonized. As the call explains, normalization projects emphasize “coexistence” rather than “co-resistance” and falsely suggest that Israelis and Palestinians are equally responsible for “the conflict.” Campuses are a major site of normalization projects, and Syracuse University is no exception. Like many universities across the U.S., SU actively promotes initiatives and research activities that seek to both normalize and legitimize the state of Israel and its settler colonial occupation of Palestine….

Less apparent, but no less complicit, are “dialogue groups.” One such group is SU’s LIME, a self-described Israeli-Palestinian Dialogue Group that aims “to facilitate educational, political and interfaith social programming, and to allow students to learn about Israelis, Palestinians and the greater Middle East region.” While at first glance this may seem a worthwhile aim, such efforts have a long history of obscuring the political realities of the occupation. As articulated by guidelines for the International Academic Boycott of Israel, the “false premise of symmetry” in these dialogues are “intellectually dishonest and morally reprehensible forms of normalization that ought to be boycotted.”

SU’s vision statement describes that the University “aspires to be a pre-eminent and inclusive student-focused research university, preparing engaged citizens, scholars, and leaders for participation in a changing global society.” To participate in a changing global society, however, we need a critical understanding of the forces of power engendering such change. The normalization projects noted above are barriers to understanding the systemic racism and colonialism that define the Israeli state both historically and contemporarily.

Accordingly, BDS does not promote or accept academic freedom or freedom of speech UNLESS it supports the goals of BDS. Such litmus tests are contrary to the free exchange of ideas.

A full and transparent investigation is needed as to what went on here that would lead a professor to believe that the “BDS faction” on campus would make her life “very unpleasant” if Dotan participated in the conference.

But one thing is for certain, the disinvitation of Dotan is perfectly consistent with BDS guidelines and requirements.

Perhaps there is some obscure definition of the term “Petition” that I am not familiar with, but I certainly would not refer to the BDS Statement as a “petition.” It is requesting (“petitioning”) nothing. It is merely stating certain mis-truths and it is creating a false narrative.

So they won’t boycott someone who agrees with them and promises to toe the line? Mighty big of them.

And of course, the implication is clear enough even for an academic: fail to toe the line and you will be hammered. Then they’ll call you a racist to boot.

All of this tick-tock (which is of the she-said/they-said variety with the evidence favoring her) is a revealing glimpse of how defensive–and insecure–BDS has become about its status on New York campuses. Recall that the state recently took action to boycott certain boycotters with BDS in mind.

This has to be a hahahaha moment when an organization whose name is “Boycott” denies that it’s boycotting.

More states should follow Cuomo in this. More Lol moments with these clowns would be appreciated

Keep drilling on this, Prof. It seems you’ve got them squirming…

One of the hallmarks of the left is the core principle that the ends justify the means. Dishonesty is just a tool. How do these BDS people define their terms?

They clearly do not define these concepts as I do.

The leftist have turned the once great universities into intellectual and moral sewers. And they are so proud of the damage.

Looking over the reviews of the movie, not sure I would want to see it. The descriptions of this fringe group will no doubt be unfairly generalized as an indictment of all of Israel by some. I am also starting to wonder who is really behind this fracas? It’s starting to remind me of “Brer Rabbit and the Briar Patch”