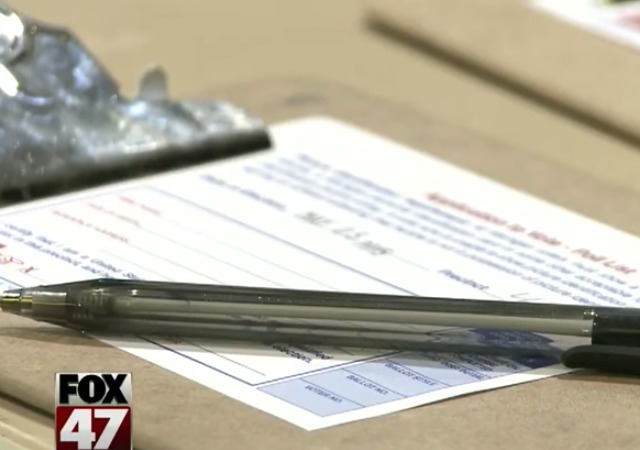 The Supreme Court refused to consider Michigan’s emergency appeal that would eliminate its 125 year-old straight-ticket voting option. The justices gave no reason:

“The application for stay presented to Justice (Elena) Kagan and by her referred to the Court is denied. Justice (Clarence) Thomas and Justice (Samuel) Alito would grant the application.”

In 2015, the state leadership decided to remove the straight ticket option so, “that a voter would not overlook nonpartisan issues on the ballot and also make a ‘more informed vote by examining the credentials and values of each candidate.'”

Lawyers for the state defended the law passed and argued in the state’s briefs that “neither the Equal Protection Clause, nor the Voting Rights Act require straight-ticket voting”. They pointed out that Michigan has joined 40 other states “by requiring voters to actually vote for each candidate they intend to support.”

“Requiring voters to actually vote for individual candidates would not be a harm to any voter, let alone an irreparable one,” they argued.

But others disagreed and filed a suit, which the lower courts sided with:

The black labor organization A. Philip Randolph Institute and Common Cause sued, saying the law was meant to discourage minority voters who overwhelmingly choose Democrats.

A district judge and then a panel of the U.S. Court of Appeals for the 6th Circuit agreed, saying the elimination of the procedure would slow the voting process and create long lines in precincts where African Americans are most likely to vote. It also held that the ballot, which could be construed to make voters think straight-party voting was still allowed, was confusing.

The courts agreed the law would not likely survive constitutional challenge and might violate the Voting Rights Act and could not be used in the coming election.

“This is a victory for Michigan voters. It would have been chaos eight weeks from now at the polls if straight-party voting was eliminated,” Brewer said Friday.

Brewer contends long lines at the polls would violate the rights of disabled voters as well as African-American voters, who historically have a higher rate of voting straight party.

“For whatever reason, and there may be historic reasons, African Americans use the option more,” he said. “And the case law is very clear if you take away the voting rights of a minority, the Voting Rights Act is violated.”

One survey found that 30% of Democrats use the straight ticket voting option compared to 20% of their Republicans counterparts.

I’ve never liked the concept of “straight ticket” voting, but there is NO argument I’ve ever read that supports the idea of it being outlawed.

The sad and sorry truth of the matter is that the democrats are basically saying that their voters are too stupid to be able to vote for individuals. This has been the democrats under-message since day 1.

You’re right-er than I would like to admit. In 2000, they argued Democrat voters in Florida were too stupid to follow a line on the ballot and too weak to push a hole all the way through a perforated piece of cardboard.

Michigan is not in the South so they don’t have to bow and scrape to the Obama Department of Justice. Because of the extension to the Voting Rights Act of 1964 – Southern States are still having to kiss the ass of government bureaucrats. Or, whenever we pass a law to check voter fraud – we get slapped down.

South Carolina allows straight ticket voting, but it does not include the office of President. That requires a separate vote.

“The application for stay presented to Justice (Elena) Kagan and by her referred to the Court is denied. Justice (Clarence) Thomas and Justice (Samuel) Alito would grant the application.”

Ok, so they denied the stay, but is says it was referred to the court, does that mean they will still hear the case at some point?

No. Not on this application. It was voted down.

I’d be interested to know why Thomas and Alito were in favor of accepting it.

Rags, I think Gremlin was asking if the Court would hear an application for Certiorari on the merits of the case later.

I may be wrong, because I don’t follow Michigan rulings closely anymore, but I don’t think that Michigan has actually submitted an application for Cert yet, they just filed for an emergency stay of the ruling by the Circuit and 6TH Circuit preventing the law from going into effect for this election cycle, until such time as the SCOTUS can actually hear the case.

Perhaps the legislators who voted for this were seeking partisan advantage, but, why would that be relevant?

I would think the only relevant question here would be whether prohibiting the straight-ticket voting option substantially burdens voters who wish to vote a straight-party ticket. Does it?

The headline is misleading – straight-ticket voting has not been banned. It has been eliminated as an option on the ballot. Voters can still vote straight-ticket, but they must do so by selecting individual candidates from the ballot.

The headline would be correct if it referred to the “elimination (not “banning”) of the straight-ticket ballot option.”

You spelled it wrong: