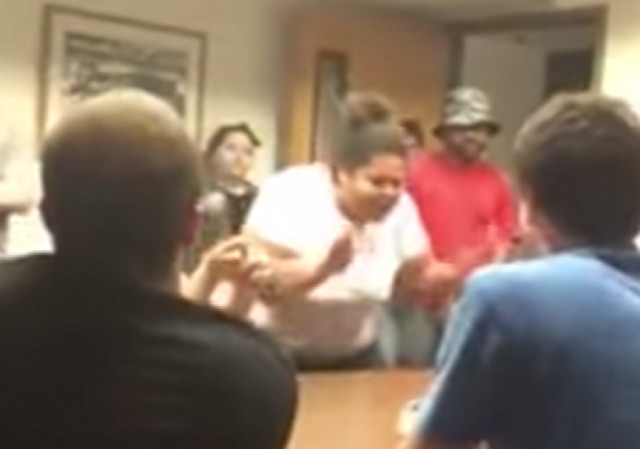 Concepts like safe spaces and microaggressions are so ridiculous that it’s easy to forget that there are people who take them seriously. Really seriously.

Case in point: Young Americans for Freedom recently held a meeting at the University of Kansas and some social justice warriors showed up. You can probably imagine how things went.

Wow: Students Scream, Swear at U of Kansas Classmates for Questioning Safe Spaces

Students from the University of Kansas’ Young America’s Foundation just learned the hard way that those who advocate for “safe spaces” and “trigger warnings” for themselves aren’t as courteous about other people’s feelings.

Thursday night, the University of Kansas YAF asked students who supported “safe spaces” to debate the topic, politely, with several young conservative KU YAF members. The event, called “Stand with Me” was in response to a video (and poem!) posted by transgender student Micha Cox, who claimed to have been harassed and berated as she was walking across campus.

YAF had anticipated some protests, but what they got was a complete meltdown, clearly inspired by Trigglypuff. A group of social justice warriors invaded the meeting, screaming obscenities, verbally abusing the YAF students, calling them “racist” and “white supremacist,” lecturing students about their “white privilege” and even berating the students for holding the event.

At the meeting’s most volatile point, an African-American female student — believed to be student Trinity Carpenter — can be seen screaming at the YAF students about “institutional racism,” accusing them of spreading “hatred,” and blames them for benefiting from the practice of slavery.

She then forcefully implies that all of civilization is a white social construct designed to oppress her, specifically, and accuses a YAF member who stops interacting with her of exhibiting “white fragility.”

Be warned. The video is filled with four-letter words:

The Washington Times outlines my favorite moment of the exchange:

The conservative group is also repeatedly condemned for not calling a transgender student by the proper pronouns.

“My pronouns are ‘they’!” the transgender student cries at one point. “So from now on, when you refer to ‘them,’ use ‘they’ and ‘their,’ because we’ve shown you the respect to refer to you by your name. So from now on you will refer to them as ‘they,’ because that is the appropriate thing to do when you are above the age of [expletive] 12.”

When one conservative student casually refers to his antagonists as “you guys,” the entire room goes crazy.

“Do not call us you guys!” one student shouts. “That is a microaggression!”

You can’t reason with people who aren’t rational.

Chilling. It’s a power thing. Brown Shirts in the new campus norm aided and abetted by Administrators and faculty from the New Age. These aren’t snowflakes, these are thugs.

It’s our version of the PRC Cultural Revolution.

It’s more than that. With the NEA and the Southern Poverty Law Center having created a CARE Guide and Diversity Toolkit to use in P-12 as an integral component, these appalling attitudes and beliefs are being cultivated now from an early age. http://invisibleserfscollar.com/shaping-a-mind-is-more-important-than-stuffing-it-grasping-the-psychosocial-key-to-fundamental-transformations/

These attitudes, values, and beliefs are trained to become unconscious habits of mind grounded neurologically in the parts of the brain that process through emotion and visual images. Triggers is literally a mechanism used to create these outbursts precisely because they are likely to prompt politically desired actions.

This will only get worse until it is better understood.

You said “thugs.” That’s a dogwhistle.

Did you say “dogwhistle”? I’m having trouble hearing you because of this high-pitched sound in my ears.

Wow! Thugs? You will melt some snowflakes with that comment. Good job. These guys, {the SWJ’s} yeah I said it, are the definition of a mental disorder.

The parallels between the SJWs and the Nazi Brownshirts are stunning.

“You can’t reason with people who aren’t rational.”

SJWs are not about dialog. They are about power. They only understand power as in I win, you lose. Just like the Brownshirts before them. YAF should have been prepared with some serious security. It was naive to expect a civil discussion with an SJW.

So, logically, is “I’m with her” now becomes a microagression too, right?

Yeah you got it.

I have a pronoun for them “psychotic”, well it’s not actually a pronoun but it is appropriate.

“Make the enemy live up to their own book of rules.”

When they scream and curse at you tell them that they are being offensive and that is harassment. When they invariably call you racist tell them that is a microaggression and triggering.

Ironic, how they demand safe spaces, but only for themselves.

I was about to say something similar – the irony of the most offensive people in the room screaming for protection from things that offend them. I’m sure such subtleties are lost on them.

Subtleties aren’t the only thing that’s lost on these moonbats.

Unfortunately, University administration would side with the bullies.

Cursing and yelling and pounding on the table, how is this different to a 4 year old in a tantrum?
And that’s exactly the problem. We have all these 4 year old brats with a huge sense of victimhood trapped in the body of an adult. And they are allowed to vote.

In other words, how ‘white privilege’ ‘microaggressions’ ‘triggered’ ‘safe spaces’ can seemingly appear out of nowhere, and in a relatively short time become accepted as normal.

Communal, community, communism. Its all the same thing.

People can employ their right of association and form a commune.

Fine, swell, groovy. No issues with that whatsoever.

The people of Masive=chew=sits can vote themselves into a pure Communist state of being. Fine with me.

BUT, when either tries to IMPOSE that bullshit on me, we DO have a hot war on our hands.

Federalism. Learn it, live it, love it.

This has to be stopped, now, by whatever means. Institutions that cultivate this need to have their financial spigots turned off and their administrators told to get back to business. This is the Red Guard who who gladly escalate to executions if they were allowed to. Smart, earnest students are losing their shot at future due to these histrionics. Heart governs head these days and that’s a short step to mob rule.

The butterball in the video refers to “white fragility.” She didn’t invent that term herself–it is the contribution of Robin D’Angelo whose videos abound on YouTube. Once again, aggrieved snowflakes adopt the race-baiting musings of a pseudo-academic public speaker for their tyrannical campus outbursts.
And the university administration encourages it.

She makes a lot of safe space behind her lard ass. If she had been with Custer, they wouldn’t have needed to kill their horses.

Instead of taking up a position on a small rise, Custer would probably have used “them” as higher ground. (Did I use the correct pronoun? I hope I didn’t give offense to the cow. There now I’ve done it – given offense to actual bovines everywhere.)

More of the above-mentioned irony going “whhfffttt” right over its head. (“It” – as good a pronoun as any.) Calling out white people for “fragility” while having a shit fit for being referred to with the wrong pronoun.

All they are doing is trying to shut down any discussion that disagrees with their viewpoint.

This has to be stopped right now.

No, she’s now spreading her venom in Spokane, WA at Gonzaga U.

Except for hard core, far left leaning, “non-profit” organizations (paid agitators), I can’t imagine any employer hiring these crazy students. Progressives talk about saddling students with the massive burden of debt (their words), but it is widely compounded for some by the indoctrination making them undesirables for most.

Couple of things to think about. I wonder how many of these ‘students’ actually attend KU, because Lawrence always been a bit liberal compared to the rest of Kansas, but this is way over the top. I’ve never been so proud as to have attended the ‘other’ university in Kansas.

Secondly, Kansas is currently in a bit of a fiscal squeeze right now, with various educational institutions attempting to grab as big a share of the pie as they can. Even though that ‘pie’ has been growing every year, the criticism of Brownback’s education budget has been epic. The Kansas Supreme Court has repeatedly clashed with the legislature and the governor, making judgments that constantly short-sheet the carefully worked-out budgets of our elected officials. We’re good for now, since the courts (finally) blessed the budget back in June, but when the legislature meets again, the screams of ‘More money!’ will once again echo through Topeka for the foreseeable future. A few program cuts would be a good spot to start, and the nitwits above are just drawing attention to themselves in the worst possible way.

This is simply cuckoo. Admins must put a stop to it now.