Sen. Warner Makes His Hillary Endorsement Mainly About Himself

Sen. Warner Makes His Hillary Endorsement Mainly About Himself 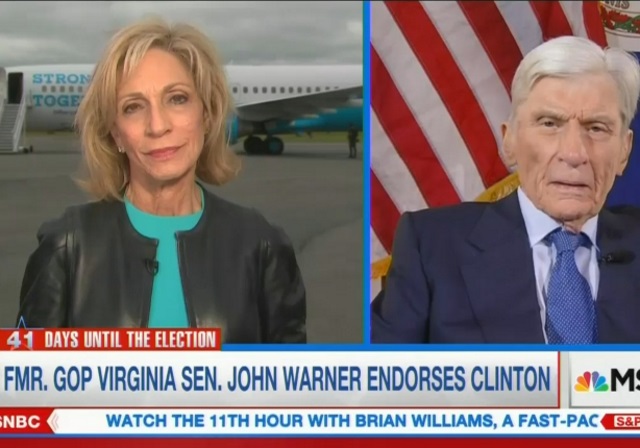 Perhaps John Warner’s biggest claim to fame is a distinction he shares with a good-sized chunk of the older male demographic: having once been married to Elizabeth Taylor. But the former Republican senator from Virginia found another way to get himself some attention today: by endorsing Hillary for president. Interviewed by Andrea Mitchell on her MSNBC show this afternoon, Warner managed to make his endorsement mainly about himself.

Note: We’ll cut the 89-year old Warner slack for a memory that is not necessarily razor sharp. Still, it was interesting to note that despite managing to work into the conversation the fact that he had been on the White House lawn for the handshake that Shimon Peres [who passed away yesterday], as the architect of the Oslo Accords, helped bring about, Warner obviously couldn’t remember Peres’ name and so referred to him as “that great statesman.”

Then, after getting that bit of bragging done, Warner had to ask Andrea to remind him what her original question had been: pretty funny, considering that the only reason he was on was to explain his Hillary endorsement.

Note Segundo: Judging by the way Warner managed to make it mainly about himself, you have to wonder whether President Obama might have taken lessons from him at some point?

ANDREA MITCHELL: Why did you decide to endorse Hillary Clinton over Donald Trump?

JOHN WARNER: Well, first, Andrea, may I congratulate you and others on the very dignified way you’re addressing the loss of that great statesman. I was on the White House lawn as a senator when that handshake took place. And the whole world lost a powerful figure for peace. Now, back again: you had a question.

ANDREA MITCHELL: The question is —

WARNER: Fine. Very simple. I related what career I’ve had in life to what was taught me as an early young man by the Navy and then the Marine Corps. I served in both . . . I’ve devoted much of my life — I say with a sense of humility — to national security issues, having been a leader on the Armed Services Committee for 30 years in the Senate.

And I just said, I believe of the two candidates, having watched Hillary work on the Armed Services Committee where I was her boss, the chairman . . . And I just wanted to draw the attention of the undecided voters in my state, Virginia, which supported me so strongly . . . We never had a security problem the whole time, six years, to my knowledge, as chairman on that committee with the way our members handled security matters.

Cool… the former husband of Elizabeth Hilton-Wilding-Todd-Fisher-Burton-Burton-Warner-Fortensky and a great admirer of child abuser Michael Jackson fits right in with the Clinton Crime Family.

The mortician sure did a good job on Warner.

Warner has always played the role of the Republican ready and willing to work with the Democrats on a compromise, which does mean he’s voted for a lot of things like the Brady Bill, Cap & Trade, TARP, etc and isn’t a person who will influence conservatives. My feeling is that he sees himself as a power broker between the two parties.

Still, Warner was popular both in Northern Virginia and in the Norfolk – Virginia Beach area which has a large military population (he is ex-Navy), so I think he probably will influence the state results to some extent, and there’s no question that Virginia is a swing state nowadays, although it wasn’t all that long ago that it was reliably Republican in every election.

Man, they are getting them all out of mothballs to support the esteemed stateswoman. Warren looks like the bald eagle in the Muppets.

What an influential old corpse.

Sounds like Hillary has a lock on the Zombie vote in VA.

Warner exposes himself for the corrupt, spineless poser he is.

I’m not sure that I would be persuaded by a senile crony politician, who bought his way into politics by marrying a banking heiress, then discarded her for Liz Taylor, after his purchased position had been cemented.

Warner was always a charlatan and a RINO at best. I see he has not changed.