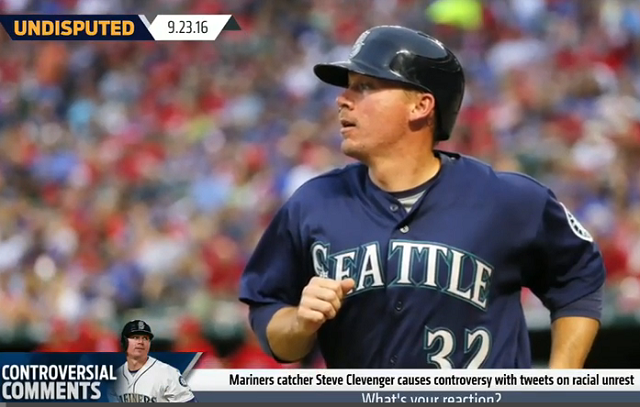 Criticizing the Black Lives Matter movement and Obama has resulted in the unpaid suspension of Seattle Mariner Steve Clevenger.  He is suspended for the remainder of the season.

The Seattle Mariners have suspended Steve Clevenger for the rest of the MLB season after the catcher labeled the Black Lives Matter (BLM) movement and President Barack Obama “pathetic” on Twitter Thursday.

Clevenger also also [sic] mocked the protests of sports stars kneeling during the US anthem and seemed to suggest all involved in protesting the death of Keith Lamont Scott at the hands of police in Charlotte, North Carolina, should be locked up like “animals.

“Black people beating whites when a thug got shot holding a gun by a black officer haha s**t cracks me up! Keep kneeling for the anthem!” Clevenger tweeted Thursday.

In case the above tweet or image don’t show up, it reads:

“The Seattle Mariners are very disappointed at the tweets posted on Steve Clevenger’s account. While he is certainly free to express himself, his tweets do not in any way represent the opinions of the Seattle Mariners. We strongly disagree with the language and tone of his comments.

We are currently examining all internal options that are available to us as we determine appropriate next steps. We will have no further comment at this time.”

As we’ve come to expect in such instances, Clevenger has issued his own statement of apology and regret.

First and foremost I would like to apologize to the Seattle Mariners, my teammates, my family and the fans of our great game for the distraction my tweets on my personal twitter page caused when they went public earlier today. I am sickened by the idea that anyone would think of me in racist terms. My tweets were reactionary to the events I saw on the news and were worded beyond poorly at best and I can see how and why someone could read into my tweets far more deeply than how I actually feel.

I grew up on the streets of Baltimore, a city I love to this very day. I grew up in a very culturally diverse area of America and I am very proud to come from there. I am also proud that my inner circle of friends has never been defined by race but by the content of their character. Any former teammate or anyone who has met me can attest to this and I pride myself on not being a judgemental person. I just ask that the public not judge me because of an ill worded tweet.

I do believe that supporting our First Amendment rights and supporting local law enforcement are not mutually exclusive. With everything going on in the world I really just want what is best for everyone regardless of who they are. I like many Americans are frustrated by a lot of things in the world and I would like to be a part of the dialogue moving forward to make this a better world for everyone.

I once again apologize to anyone who was offended today and I just ask you not judge me off of a social media posting. Thank you and God bless everyone.

Undisputed has more, including Skip saying that he’s “ashamed to share this man’s skin color” and declaring the tweets “evil thoughts”:

Oh my! If only he had taken a knee instead, then all would be forgiven.

Really, I don’t agree with what he did.

I don’t like to think of professional athletes in terms of politics, but if we have to give players slack for pumping fists, hands up, and taking a knee, then we have to give equal time to other views.

Free speech for me, not for thee.
Bashing America, bashing our flag, all acceptable free speech.
Beam me up.

if only he had said they were deplorable and irredeemable, everything would be fine…

Maybe I’m to old but can someone show me which parts were racist?

I may have this wrong, but apparently, any criticism of any black person or group is fundamentally racist. Pointing out, for example, that a black president’s policies significantly and specifically harm the black community is racist. Pointing out that violating the law in the name of “Black Lives Matter” is lawlessness is racist. Basically, any criticism of anyone who is non-white, non-Democrat is racist.

The far simpler explanation: It was racist because BLM determined it was racist.

Bogus charges of “racism” predate BLM by many years.

the nail analogy…..don’t be a nail that sticks up in a board, because you are either going to get pulled out or hammered in.

FS: You are right. And the same principle will apply of any criticism of leftist women if Hillary is elected.

Without that, he’d probably have been fine.

With that, he’s screwed.

I don’t understand, what’s the problem? He just stated the obvious.

Would he be suspended if he were non-white?

Are the Mariners the racists by taking action based on his skin color?

I am addressing the process not the content nor his judgment as it seems that only the process is in play if a leftist releases his/her hate on the country or a cracker — “He/she has a right to say __________.”

I agree with what was posted on a different blog. The only offensive part of the whole matter is that Clevenger apologized.

“The bluest progs you”ll ever see are in Seatte….
And the greenies the greenest green in Seattle…
Like a beautiful child growing up with freebies and running wild…
Full of hopes and full of change…
Full of safe spaces , full of distain..
Full of social justice to ease the pain…
In Seattle…..
In Seattle….”

I’ll say it again; Little League Baseball is every bit as entertaining as MLB. Plus you don’t get raped for hundreds of dollars for tickets, parking and concessions. You can take a picnic basket, sit right behind the bench and enjoy yourself without getting jostled about by a crowd.

If you’re really, truly sick of these progressive elites trying to force their agenda down your throat, then simply stop consuming their products/services. When their ratings crater, they’ll feel the burn and STFU.

The minor leagues have fine players and you can even get close enough to see them.

I agree. But for me, nothing beats watching the little ones and their joy for the game.

Ol’ “Skippy” can always get a dye job. Something in a nice purple would seem about right…

There is nothing worth saying about a little turd like Skippy.

#sorosblacklivesmatter is a fascist organization, with direct ties to Obama/Jarrett.

What does that say about Obama/Jarrett? – Though we already know it.

Soros is known to fund riots in the US for the purpose of influencing our political process. Last time I checked, that is the definition of Terrorism.

The mf-er needs to be droned. Or we could compromise and put him on a terror watch list and freeze his assets in the US.

I’ve been disappointed with sports since the MLB strike of ’94. Sports were supposed to be a respite from everyday living and politics, No longer.

Time to stop financing facilities
Time to stop those military flyovers and color guards.
Time to let them rot in hell.

“My man Shannon Sharpe” sounds racist. Would he have send that about a white person. Skip should be suspended without pay for at least a year.

Spell check screws up again. Would he have said that about a white person?