Scarborough Advises Hillary on How to Attack ‘Right-Wing Republicans’

Scarborough Advises Hillary on How to Attack ‘Right-Wing Republicans’

Howard Dean So Impressed by Scarborough’s Script, Says ‘You Could Actually Be Her Speechwriter’ 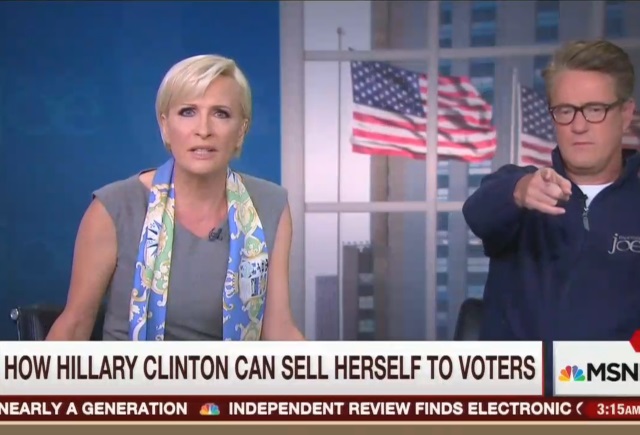 How deeply has Joe Scarborough dived into Hillary’s tank? On today’s Morning Joe, Scarborough offered Hillary a script of how she should attack “right-wing Republicans.”

Howard Dean was so impressed by Scarborough’s work on Hillary’s behalf that he exclaimed “I actually think you could actually be her speechwriter. That’s exactly what she should be saying. I’m sure you don’t want that job, but I’m just saying, you know?” Howard, don’t be so sure Scarborough doesn’t want that job. Sure looked this morning like Joe was auditioning for a spot in Hillary’s West Wing.

JOE SCARBOROUGH: She hasn’t said this yet. Jim VandeHei, she needs to say: You know what? Just like I fiercely defended my husband in the 90s, you know, I did that first and I asked questions later. I got embarrassed. We all got embarrassed. But you know what? We fought through it together. On these emails, I made a mistake! You know what? My family’s been attacked for 35 years by right-wing Republicans. My child has been hurt by attacks against our family by right-wing Republicans. They take — you know, they called my husband a murderer in the 1990s. Now they’re call me “Killary.” These are the same people on the first night that Barack Obama, the first black man ever in American history was sworn in, were figuriing out how to destroy him politically. So yes! Maybe I was too aggressive in trying to protect my family and protect myself. I made a mistake. But I hope you can understand: while I was doing that, these are things I also was doing [ed: i.e, her accomplishments.]

HOWARD DEAN: I hate to say this, Joe, but I actually think you could actually be her speechwriter. That’s exactly what she should be saying. I’m sure you don’t want that job, but I’m just saying, you know?

… and my accomplishments were in ignoring the dangers in Bengazhi causing four people to die, destroying a filmmaker’s right to free speech, hurting rape victims and calling them nasty names, and subverting the political process to push through health care.

Just wait to see what evil I do to the country when I AM President!

But Trump isn’t a right-wing republican. Far from it. He’s a Truman Democrat (at least I hope he’s no more liberal than that).

Trump is the right wing Republican the media dremt up.

Given the demographic shift, do you think any right wing republican could win? Would it be remotely possible? As it is, Western Style democracy is clinging by its finger nails.

Scarborough treats conservatives like he treated his late intern.

I refuse to click on any MSNBC links.I can get the gist from the text.

Is it me or is there an obsession for this program by either LI in general or Mark Finkelstein?

For what it’s worth, Scarborough’s suggest is a dud in my view. The public KNOWS what their eyes and ears tell them. And some “they’ve been beating on me for 35 years” approach won’t change that. It might be great for converting a few still angry Bernie supporters. But it’s not a big winner in general.

At this point, the only way to gain votes is to stir up your base and get voters to the polls. The next 60 days are going to see a lot of hysterical ranting.

My personal suspicion is that Trump is going to try to appear calm and statesmanlike, while the Democrats go shrill.

The comment on wanting to destroy Obama proves GOP is not racist. We like to “destroy” all Dem presidents. We didn’t want to discriminate so we treated him the same. As They say if you can’t stand the heat get out of the kitchen. By the way would Joe’s talking points work if Hillary was a man?? Boo Hoo.

There is nothing new in Scarborough’s advise. Hillary ALWAYS resorts to being a victim when she is criticized. She even coined a name for it: Vast Right Wing Conspiracy.

I, personally, don’t want someone who sees herself as a weak victim to be president.

Ah, but you misunderestimate the power of the fully operational straw man employed here.

Hellary is NOT a “victim”, but a bold and courageous fighter against the forces of EEEEeeeeeevile rightwingism.

She gets to erect a fraud and then fight it, and a lot of dupes feel sympathetic.

The whole deal is a lot like the BLM movement when you consider it.

So Joe figures she should capitalize on her screwups; make them work for her, rather than against her.

Sure, I can see how that would go.

“Oh, po’ lil’ me, I’m such a goof! You should have seen Chelsea’s delivery. What a scream! Right after her ‘coming out’—ha ha hah ha— the nurse handed her to me, and she was so slippery I dropped her! Right on her head! It was such a riot! So they picked her up, and I did it again! Ha ha ha ha ha! And in the same place! Then they called in Chelsea’s dad, and Web—oops, I mean Bill, he picked her up, and then he dropped her too! It was such a hoot! You should have been there. I thought I was gonna die laughing. When I laugh that hard I start coughing up a storm.

“After that, it’s been one screwup after another. I’m so glad that all you great people put up with both of us. It’s all really funny, if you look at it that way. Why, I still can’t do anything right! My mother always said it was ‘endearing’. Good old mom! And Bill’s such a screwup too—it’s like we were made for each other!

Yeah, that would get my vote.