Is “he had a book” the new “hands up don’t shoot” mantra? 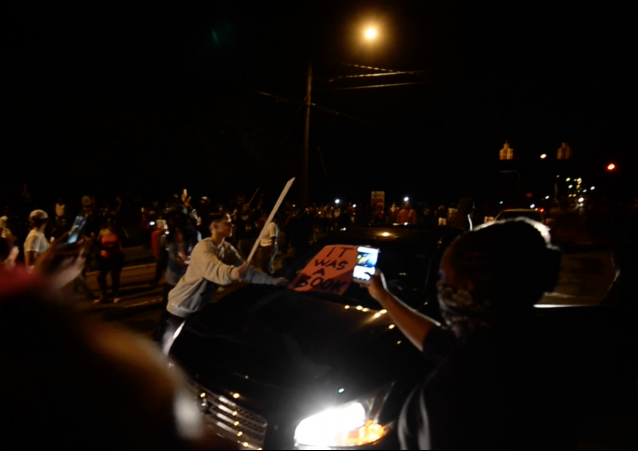 A woman claiming to be Scott’s daughter says Scott was unarmed, reading a book when he was shot and killed. Officers say that story is false, that they recovered a handgun and there was no book to be found.

Following the shooting, hundreds crowded into streets and freeways to protest police brutality, maintaining Scott was unarmed, equipped with nothing but a book.

Sixteen police officers were injured in the riots, though all injuries were minor. There were reports of injured motorists after protestors began throwing rocks, traffic cones, and bottles from interstate overpasses onto traffic beneath, reported the Charlotte Observer. Protestors looted a local WalMart, which was closed at the time.

Mayor Jennifer Roberts sent out a message on Twitter early Wednesday, noting: “I will continue to work with our manager and (police) chief…We are reaching out to community to ask for calm.”

Roberts said in a press conference Wednesday morning that she had been in contact with the state governor’s office, the White House and the NAACP and said the city was going to work to get out information as quickly as possible, while also dispelling rumors.

Charlotte Mecklenberg Police Chief Kerr Putney said in a 10:30 a.m. press conference that the department was working to gather facts, including viewing video from the scene. He said the officer involved was in plain clothes, wearing a vest and was accompanied by uniformed officers when they approached the victim. It remains unclear Scott was pointing a gun at the officer when he was shot, Putney said. The officer was also African-American.

Putney added that officers have not found a book at the scene of the shooting, contrary to social media claims that Scott was holding a book.

“I can tell you we did not find a book that has been referenced to,” Putney said. “We did find a weapon. The weapon was there and witnesses have corroborated it, beyond just the officers.”

Putney said the department would be staffed Wednesday in expectation of more protests, which he believes will be peaceful. “We’ll be prepared for whatever we see…We’re hoping for best but will be prepared for the worst,” he said.

Early Wednesday morning, demonstrators shut down traffic on Interstate 85. Some protesters opened up the backs of tractor trailers, took out boxes and set them on fire in the middle of the highway, WSOC reported. The station spoke to one truck driver who said people stole cargo from her trailer. Police reportedly used flash grenades to break up the crowd and had cleared the highway by early morning.

They shout “NO JUSTICE, NO PEACE!” because they have no use for either.

But they do have a lot of use for all that free stuff they get from looting.

Read a statement by the chief that Scott was ordered to drop a firearm, and didn’t.

That CAN get you justifiably killed.

“A nice boy just getting some tea and skittles” was a lie.

And “just a book” will likely prove to be a lie as well.

The progs don’t give a shit. They tell lies to advance their agenda, which is chaos in our society so that the masses beg for more government “control.”

Dispute and fight the lies every time and every place you hear them.

He was holding a clock.

Why is it that every time someone of color is caught and killed by police while committing a criminal act it’s the CVSs, Wal-Marts and liquor stores that have to suffer?

Because Bergdorf-Goodman, Tiffany’s, and Saks Fifth Avenue are too far away.

oh, they know better than to pull this crap in the suburbs. Lots of white gun owners there that actually know how to use a gun.

This so-called daughter: was she a passenger in the car? Or how, exactly, would she know what the deceased was doing immediately before he got that hot lead injection…

The mob, and the press, are so willing to jump on and run with the first lie that it boggles the mind. And just why would anyone think that looting a Wal-Mart would give any kind of solace for the grief the community suffers? Yes, that was sarcasm. Why do you ask?

Books, no. Magazines, on the other hand…

I know this is too early, and in bad taste, but…

He appears not to have had a book, but it does appear he had a magazine…

Some claimed that he had a book in his hand, not a gun.
But officers found no book, only a gun.
Conclusion: If a gun identifies as a book we must respect that. It is bigoted to only respect cis books. #TransBooksMatter!

Why is the lie “Hands Up don’t Shoot continued to be pushed?

Hands Up don’t shoot has caused police officers to be killed and many injured. It’s a complete and total lie!

The race baiter Crooked Hillary is guilty of using this to try
to get black votes! Shameful

So not just the cops, including the black cop who was the shooter, but also witnesses have confirmed that the suspect had a gun.

But hey, facts don’t matter when there are white people to be attacked and Wal-Marts to loot.

Obama is directly responsible for this “Attitude” that young black males have now towards police stops. Ever since his first “The cops acted stupidly” statement there has been a slide towards disobeying what a cop tells them to do. What ever happened to STFU and putting your hands in the air? I got stopped in broad daylight for speeding and when I pulled over I put both hands out of the window palms up. The young cop was so impressed he let me go!In your wildest dreams can any of you imagine getting out of your car with cops surrounding it, guns drawn, and you step out with a gun in your hand? And then they yell “Drop it” and you don’t. What would you expect next?

The goal is a Federal Police Force. THEN blacks won’t be ‘unfairly’ targeted. /sarc on the last sentence.

I suppose that the DOJ traveling police department racism investigation buses are on their way to Charlotte and Tulsa. In this case the cop that shot the gentle reader was black so what does the new world order protocol dictate, the department be replaced entirely by Samoans?

Well that doesn’t make sense that he would have a book instead of a gun, since the POTUS assured us that it was easier to buy a Glock than to get your hands on a computer or even a book. Something sounds fishy.

You erringly point to a misalignment between the POTUS and reality. Reality will need to be adjusted accordingly.
*NOTE to our 2 resident #never…uh, Democrats, 2 down votes assumed. I’ll ask ask the moderator if they can be automated.

Whenever you start a sentence like “Blacks don’t care…” a little alarm should go off in your head, because your about to say something that is…

1. untrue (if black people didn’t care, the Ferguson LEO who had to shoot the Gentle Giant would have been crucified)

Who says blacks don’t care? I think you need to re-read what I wrote. Blacks don’t want the truth, it hurts their feelings.

I have to ask you, Rags……I have grown up surrounded by black people…..went to school with them from first grade to twelfth grade, and have spent my entire adult life working with them here in deep red South Carolina. Care to shed a little light on your demographics? I don’t think you fully grasp black culture. Go ahead and call me racist….you don’t want to hear the truth, either.

Blacks are not the Huxtables nor are they Uncle Phil from “Fresh Prince”.

Isn’t it against the law to incite riots?

Depends on who is doing the inciting and why.

What is this “law” of which you speak? Is it of old?

It’s against the law to incite any crime. But do you have any idea what that word “incite” means? Who do you think incited these riots, and why do you think so? “Incitement” isn’t a term you can just throw around loosely. It has a very precise and limited meaning, and anything beyond that is protected by the first amendment and thus can’t be against the law. I don’t see anyone in this story who could be charged with incitement.

Mayor Jennifer Roberts sent out a message on Twitter early Wednesday, noting: “I will continue to work with our manager and (police) chief…We are reaching out to community to ask for calm.”

Maybe they should reach for the mace and bring in buses with bars to take the lawbreakers to jail. None of the catch and release nonsense.

Was this Der Donald’s “police acted stupidly” moment, in pandering to a black questioner?

Looting a Wal-Mart store is not civil disobedience and is never justified by some alleged wrong to the individual or group. This is simply a crime and must be treated as a crime. The police need to film these events and then go after and arrest and prosecute these individuals.

Having worked law enforcement for a while I can pretty well guarantee that most of the people rioting will be easily recognized by the police because of earlier contacts with those individuals. I am even pretty confident that many, by looting, are breaking their probation or parole and can be returned to custody with little effort.

We must not allow the uncivilized to destroy or control our civilization.

There’s no biz like show biz. And this is show biz.

If Trump wins, perhaps Soros will finally be indicted for sedition.

Muslims responsible for terrorist attacks in New York and nothing happens, cops shoots black criminal and everyone loses their mind. This is so disgusting that they want to wait for the facts for the terrorist attacks but immediately attack cops for putting down a menace to society.

My guess is this career criminal couldn’t read.