Mika: ‘Incredibly Prepared’ Hillary Has to ‘Dumb Herself Down to Deal with this Idiot on the Other Side’ 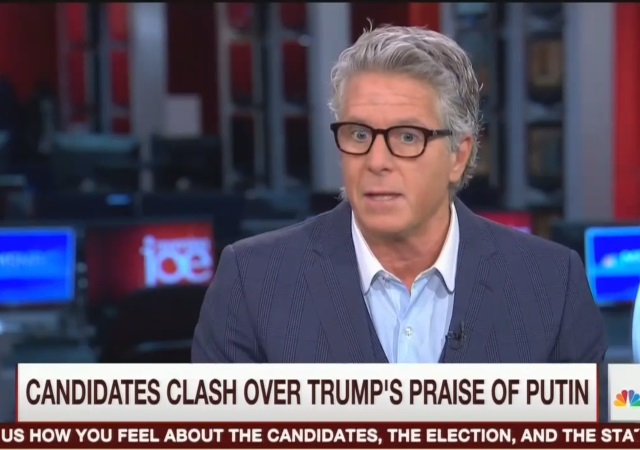 The opening segment of today’s Morning Joe was a Niagara of negativity deluging Donald Trump, focused on his comments at the Commander-in-Chief Forum. No discussion of Hillary Clinton’s newest lies about her email, and the fact that, in order to create a veil of secrecy for her Foundation malfeasance, she subverted our national security.

Two examples of the extreme hostility toward Trump, coupled with a dose of Hillary-worship. Ad man Donny Deutsch detected “envy” of Putin by Trump, saying “I think he wants to be a dictator.” A bit later, Mika Brzezinski sympathized with poor Hillary: she’s so “incredibly prepared” to be president that she has to “dumb herself down to deal with this idiot on the other side.”

Note: Deustch claimed that if Hillary praised Putin as Trump did, “they would literally run her out of the country.” Question: how long would a Republican candidate have been able to stay in the race if his lies and subversion of national security regarding email had been exposed in the way Hillary’s have? My answer: such a Republican would have never dared enter the race in the first place, knowing the onslaught of MSM obloquy he would come under.

DONNY DEUTSCH: Can you imagine if Hillary Clinton called our generals “rubble” and was praising Vladimir Putin? They would literally run her out of the country. It’s interesting to listen to Trump and his bromance with Putin. Because it shows something about his psychology. In his mind, that’s the kind of leader he would want to be. I think he wants to be a dictator. I think there’s an envy there.

MIKA BRZEZINSKI: Well and that’s the challenge for Hillary Clinton, as we move on here. Because this is a woman who is, you know, whether you agree or not with her policies, incredibly prepared for the office of the presidency and has prepared for this campaign and has a website and policy papers that are just, people argue she has to sort of try and distill because there’s so much information, because she’s so prepared. What she’s trying to do and what you see her struggling with is having to dumb herself down to deal with this idiot on the other side. And it’s even harder because it’s like how do you even — what floating, shiny object do you attack that comes out of his mouth? And instead of talking —

NICOLLE WALLACE: How do you debate someone like that?

But Trump’s statements re Putin are unassailable.

Putin is a leader. He works at furthering his conception of Russian’s best interests, and he works at it every day. Something only a crank would claim about, say, Merkel or Obama.

Is Putin a great leader? I wouldn’t say so. Trump hasn’t said so, either. But compared to the pygmies “leading” the world today—a low bar, to be sure—he shows real promise.

Putin is cautious; no bad thing, even (or especially) for a leader. He was careful to not get too big for Russia’s britches (size: medium L) when George W. was in the White House. But he started to squeeze his neighbors, to Russia’s advantage, after perceiving that George’s replacement is so utterly inconsequential.

In other words, when the opportunity presents itself, Putin is trying to Make Russia Great Again. (Hmmm … where have we heard a phrase like that recently?) Is Deutsch claiming that only dictators can make a country great? An odd position; America has had some fairly decent Presidents who managed to do their jobs pretty well without being terribly dictatorial.

I think we can safely reject the formula [Strong Leader]=[Dictator].

After the USSR fell, Russia was ransacked by the globalists. Putin kicked them out and did Make Russia Great Again. Since he took power, standard of living is up, GDP is up, life expectancy is up, etc. That’s leadership.

After the USSR fell, Russia was ransacked by the homegrown mafia. Putin reigned them in, emerging on top of the power vertical. Then Ukraine’s mafias ganged up against him. Oops! Mother Russia lost The cradle of Russian civilization.

At least Her Majesty dimmed down her aura of divine might enough not to blind the reporters with her glory. The only problem at the ‘press conference’ is enough of her radiance saturated the pavement where her feet touched base earth to turn that segment of concrete into gold (promptly devoured by the ravenous press, which has fed only on the crumbs falling from her table over the last few months.)
/sarc

Seriously, those ‘questions:’
-Secretary Clinton, you’ve been criticized by the RNC for your demeanor last night, that you were too serious, that you didn’t smile enough.
-Like the hat.
-QUESTION: (inaudible) (several of these)

Joe and Mika are the news version of Saturday Night Live after all the funny people left.

Trump should tweet “Knowing the strengths and weaknesses of those on the world stage is presidential. This election is a referendum on Obama and Hillary’s failed policies, not Vladimir Putin’s leadership skills!”

hilldog hasn’t dumbed nearly as much as I would have to in order to vote for her.

What I find the most amusing is that the author believes that the Donald is unjustly accused of strongman envy, but the Tramposphear is saying “Yeah,, we kind of like Vlad.” And doesn’t see a problem with Trump’s remarks.