No, stupid politicians are not a legit excuse to call 911. 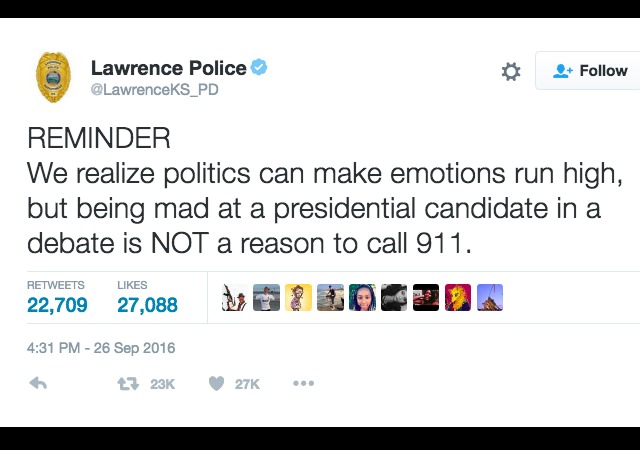 Presidential debates tend to cause anger, especially this year since we’re stuck with Donald Trump and Hillary Clinton. But apparently these candidates have really struck a nerve with people in Kansas:

REMINDER
We realize politics can make emotions run high, but being mad at a presidential candidate in a debate is NOT a reason to call 911.

The local news does not know how many people called 911, but I think it’s safe to assume they received enough to warrant a tweet.

They also advised against drinking games during the debates:

Additionally, drinking games where you drink every time someone says "yuge" leads to binge drinking, and we discourage that strongly

People, let’s save the 911 calls for emergencies like McDonald’s running out of Chicken McNuggets, OK?

Fries? What about fries? You think it’s okay to run out of them and not be able to call 911?

9-1-1: “Ma’am, we are not going to go down there and enforce your western bacon cheeseburger.”

Lady: “What am i supposed to do??
—————
9-1-1: “What are we protecting you from, a wrong cheeseburger!? Is this a harmful cheeseburger or something? I don’t understand what you want us to do!”

The scary part was that the woman had children.

Remember, this is Lawrence, home of the only county to vote reliably for *any* democrat candidate in this mostly republican state. It’s like this little blue island in a sea of conservatives…