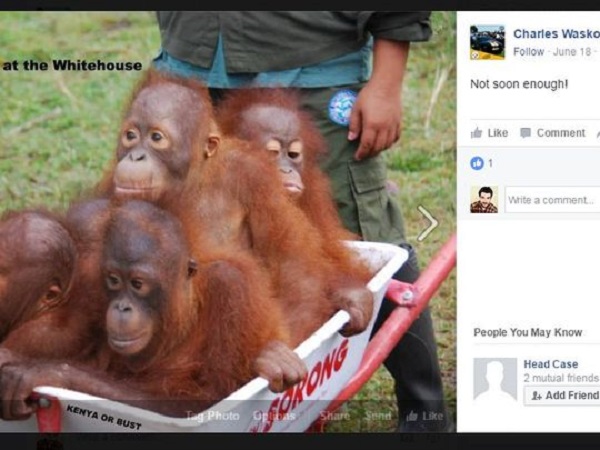 In this week’s entry in the “public official says dumb things on social media, asked to resign” files, we feature the mayor of a tiny town in Pennsylvania who used his Facebook account to post messages and images deemed racist.

According to Fox News, “[Charles] Wasko was elected mayor of the borough of roughly 4,500 residents about 100 miles west of Philadelphia in 2013. Running unopposed as a Republican, he tallied 202 votes, against 78 write-in ballots for others.”

Wasko isn’t paid as mayor and votes only to break ties on the council. But he also oversees the police department in the borough, where the acting chief, Matthew Millsaps, said he was “disturbed” by the images.

“This in no way reflects the ideology of this department,” Millsaps said, noting the department has a Hispanic man and black woman among its eight officers.

Several West York borough council members have called on Mayor Charles Wasko to step down in light of racist posts he has made on Facebook.

Wasko, who was elected mayor in 2013, has posted several pictures on Facebook this year that council members took issue with: Two compared President Barack Obama and his family to monkeys, and one suggested Obama should be hanged with a noose. Another post featured a fictional black person saying that socialism is “when the white folks work every day so we can get all our governmental entitlement stuff for free.”

Here is the second of the aforementioned posts (the first is no longer available):

A young black kid asks his mother, “Mama, what is Socialism and what is Racism?”

“Well, Child…..Socialism is when the white folks work every day so we can get all our governmental entitlement stuff for free. You know…..like our free cell phones for each family member, rent subsidy, food stamps, EBT, WIC, free school breakfast, lunch, and in some places supper; free healthcare, utility subsidy, and on and on…..you know, that’s Socialism.”

“But, mama, don’t the white people get pissed off about that?”

“Sure they do, Honey. That’s called Racism.”

(Never was it more simply explained)

One of Wasko’s posts from June features a picture of a wheelbarrow full of apes with the words “Aww … moving day at the Whitehouse has finally arrived” and “Kenya or bust.” Another, from February, is a photo of a monkey gritting its teeth, to which Wasko added the comment, “Most think it is Obama’s picture……sorry its Moochelles baby photo,” presumably referring to Michelle Obama. 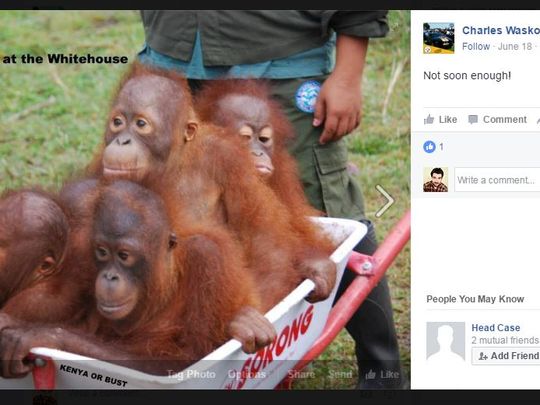 Also in February, he posted a picture of Clint Eastwood with a noose, featuring the words “Barry, This rope is for you. You wanna bring that empty chair over here?”

According to the York Dispatch, four council members have called for Wasko’s resignation.

The four council members reachable by phone on Wednesday — two Democrats and two Republicans —  out of the seven members of the council, said they want Wasko out as mayor.

Council president Shawn Mauck said this was the first he’d heard about issues regarding the mayor’s posts. He was shocked when he pulled up the mayor’s publicly visible profile and read them.

“I almost don’t know what to say,” said Mauck, who called the posts “disgusting.”

For his part, Wasko seems unconcerned.  He states that he will not be forced to be politically correct and that calls for his resignation amount to a “witch hunt.”

A small-town Pennsylvania mayor who’s being asked to resign over racist pictures on his Facebook page says he’s the victim of a “witch hunt.”

. . . .  Several members of the borough council want him to step down. In a brief phone interview with The Associated Press, Wasko said he would provide more details at a later date about his witch hunt claim and then hung up.

The York Daily Record said at one point Thursday, Wasko posted on his Facebook page that he refuses to be politically correct.

The class diversitists (i.e. racists, sexists) are on the march.

Simians are popular characters in liberal culture. Bush was a simian derivative, and now Obama is too. What changed? Deplorable.

That said, witch hunts are so yesterday. Today, we have baby hunts. Over one million annually in America alone, and millions more through Planned Parenthood and the abortion industry globally.

It’s ok for calypso louie aka louis farrakhan to say horrible things and in large crowds covered by major networks. But let this simple fun loving unpaid mayor play a few jokes and he has to step down. I do like his definitions though!

When are we sane people going to simply ignore the whining of the snowflakes?

Or better yet, just tell them to shut up?

It’s nice to see somebody in public office, no matter how small, with a sense of humor.

I wish he was the mayor of our town. 🙂

The socialism / racism joke is cleverly done – some high IQ alt-righter trying to shift the debate clearly. The orangutan “joke” is, shall we say, less clever. Neither belongs on the mayor’s facebook page.

Anyone who thinks this kind of messaging is the way forward for the Republican party is delusional, and that’s a practical assessment, not a politically correct one. Let the Democrats make the affirmative action picks, we’ll take Colin Powell, Candoleeza Rice, Clarence Thomas, Mia Love, etc every time. Being a black Republican should be an honor since people know you got to your position based on your talent not your skin color.

My thoughts: Anyone who at any time can pin back Obama’s wings with the most outlandish statements is welcome to do so. I fully recall how this country came together for 2 weeks after 9/11 and then the Demoncraps started a propaganda campaign against Bush that lasted for over 7 years. I’m tired of PCism and the slow death to reality that it encourages. Liberalism has leeched into every aspect of American life, like toxic waste water saturates once nourishing wetlands.

If it rained, it was Bush’s fault – and if the sun shined to long, it was Bush’s fault. The results? The country was primed for “Hope & Change” and the nation got ‘trick-f*cked’, in my opinion. Embarrass and slander the Obama factory of lies – I can only applaud.

I hope you’re not serious. Yes, by all means point out our President is a pseudo-intellectual, a bully in our borders and a weakling outside, a liar who can only debate a straw man, etc etc. But don’t call his wife a simian in a public forum unless your goal is to undermine every other Republican and conservative who opposes Obama based on his ideology rather than his skin color and ensure that the Democrats get every single black vote for the next three decades without having to lift a finger.

The noose joke was just stupid and I would not be surprised if he received a visit from the Secret Service.

The socialism/racism joke was clever, though a bit off the mark. Lot’s of whites and Hispanics fit in there too.

The orangutan joke is just mean. What did orangutans do to him that he should insult them so?

What an insightful comment the mayor made about Mooch! The big baby in that center or orangutans kind of looks like Mooch.

Another thing, in Indonesia they eat these little guys. Why does Obama prefer dog instead of monkey meat? It must be the white half that rebels against monkey BBQ.

Cleaning up this cesspool is hopeless, but briefly:

No, Obama would not have eaten an orangutan, He was in a wealthy expat family in Jakarta and his parents worked for the US consulate and the oil company and taught English. Jakarta is a very large city like Bangkok or Manila.

Orangutans are native to Borneo, which is another island that is divided between Borneo, Malaysia, and Brunei and is mostly jungle and plantations. They are endangered partly because they are often illegally killed by poachers, palm oil farmers, and the few remaining tribals, such as the Dayaks, and partly because they just don’t reproduce quickly. Like humans they have fewer offspring than most animals and it takes longer to raise them.

Borneo has almost 20m people and about 50,000 orangutans, and 1,000 – 2,000 are killed every year. From the numbers you can se that 99% of people on Borneo have never killed, let alone eaten an orangutan anytime recently.

This behavior is deplorable. However, if a town of 45K is unable to find another mayor — what do I care? I hope he stays in West York.