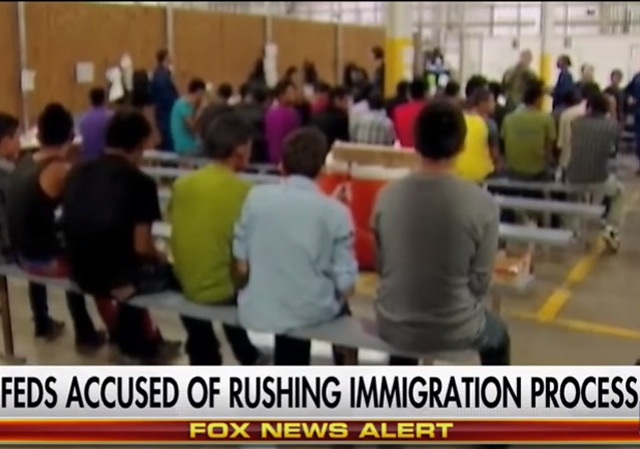 The Obama administration is working overtime to swear in as many new citizens as possible between now and the election. Critics are alleging that this is nothing more than an effort to create new Democrat voters.

An internal Obama administration email shows immigration officials may be literally working overtime to swear in as many new “citizen voters” as possible before the Nov. 8 presidential election, a powerful lawmaker charged Thursday.

The email, from a U.S. Citizenship and Immigration Services field office chief and part of a chain of correspondence within the agency, urges the unnamed recipient to swear in as many citizens as possible “due to the election year.”

“The Field Office due to the election year needs to process as many of their N-400 cases as possible between now and FY 2016,” reads the email, which was disclosed to FoxNews.com by Sen. Ron Johnson, R-Wis., who chairs the Committee on Homeland Security and Governmental Affairs.

“If you have cases in this category or other pending, you are encouraged to take advantage of the OT if you can,” the email continues. “This will be an opportunity to move your pending naturalization cases. If you have not volunteered for OT, please consider and let me know if you are interested.”

Parts of the email were redacted before it was disclosed to FoxNews.com, but it was sent by the branch chief of the Houston Field Office District 17. It was not clear to whom it was addressed.

Byron York of the Washington Examiner discussed the issue with Martha MacCallum and noted that this isn’t the first time Democrats have used this strategy:

It’s amazing that this is allowed to happen, right under the noses of the American people on the eve of a highly contested presidential election.

Maybe “amazing” but not unexpected. In the mean time, I wonder if the stationed abroad Military Votes will go missing again (like 2012) due to another accidental plane crash…

America is being pillaged: by the obamas, the clintons, by black race mongers and their white collaborators, and by the ruling class of all stripes.
Will red-blooded Americans ever push back?

Probably using employees at the State Department who were searching the Hillary e-mails by court order to help get these folks citizenship and make sure they register as Democrats.

Nothing new under the sun. Richard J. Daley imported southern blacks and gave them “free” public housing, and the democrats later pulled in loads of hispanics and consequently own Chicago. Where did Barry do his apprenticeship, I forget? Looks for loads of Hotentot “refugees” fleeing the racial strife in South Africa shortly.

Wait, this simply isn’t possible. Remember that we were told under sequestration budgets were stretched so thin that nothing new could occur. Just were did the cash come from for OT?

It’s funny to me that we’ve seen; IRS targeting scandle, three Obama officials caught using fake email addresses (Jackson, Sebullius and Holder), Fast and Furious debacle, Syrian “red line”, Russian “reset”, growth of ISIS, Russian aggression in the Ukraine go unanswered, N.Korea “sabre rattling”, Libya debacle, flat economic “growth”, Chrysler is now an Italian company (and will stop making passenger cars in the USA), Pigford scandle, Iraq in schambles, China openly disrespectful of the POTUS and in addition to what I’m forgetting last night it was released by the FBI that the POTUS was using a fake name to exchange emails with Sec. Clinton. Yet. . . .everyday, someone on social media shares the meme, “I’d vote for a third Obama term if I could”.

Man, we (the American voter) no longer seem to have the ability to live up to our civic responsibility of demanding a government, “of, by and for the people”. Sad.

Typing and hitting enter is the new active support.

“Sad”? It’s not “sad,” it’s tragic. Human beings will ultimately pay for this bud that was allowed to bloom. Real blood will be lost, is being lost, real lives altered, destroyed, rendered hopeless…. American lives that the elite don’t give one damn about.

All is fair in love and abortion… I mean, war.

The Romanovs would no doubt agree.

I think I mentioned (with respect to the military considering Climate Change) being more worried about things that can’t be undone.

This is the kind of thing I had in mind.

Though it sounds like this is just a slight speed-up of people who would have become citizens this year anyway. I’m more worried about him Executive-Tweet’ing ten million illegal immigrants into citizens…

Its crazy enough to happen since we seem to be through the looking glass. If its something that would require a legal response to roll back he could get away with it, given the who’s-on-first loyal opposition. There will be at least one October Surprise and at least one counterpunch. We’ll have to see who has the glass jaw.

I wonder how, if elected, Clinton plans to govern? She’s been eroding legitimacy for years but this process has accelerated in the past year. Some rather large percentage of the half of the electorate that votes against her may not accept her election as legitimate.

Should be interesting. The country hasn’t been here since 1860.

This is actually good news.

Consider the blizzard of voter fraud we’re going to see soon. The D’rats will gimmick the electronic voting machines, hordes of voters without IDs will vote multiple times, loyal Dem ward bosses will be prepared to find boxes of uncounted ballots whenever needed; they doubtless have mail-in votes covered, and half of the Federal judiciary will do its part to block lawsuits over blindingly obvious cases of fraud. The entire press, the race hustlers, the New Black Panthers, the Justice Department, the FBI, and, just for the hell of it, the IRS, the EPA, the State Department, and just about everybody short of the Daughters of the American Revolution will be trying to carry Crooked Hillary over the finish line.

Written out like that, the fix looks pretty solid. But is it? If the D’rats think it is, why bother with this silly Hail Mary play by Obama? It probably won’t work, anyway; there’s no guarantee that new American citizens will share the Progressive vision of a boot stamping on a human face; new citizens often prove to be relatively patriotic, which would make them poor prospects for the New World Order, American Division.

So I see this as an act of desperation. The D’rats and their oligarchic allies believe that they’re going to lose, and lose Yuuuge. They’re willing to do their energetic and nefarious best to stop it … but—as usual—they’re out of ideas.

Bill Clinton did this in the 90s in California, and HE DIDN’T LOSE.

I hate to tell Obambi, but the young lady refugee from Albania my wife and I sponsored, who became a citizen in June, registered as a Republican and is voting for Trump!!