Hey coal miners, nice jobs you had there, shame something happened to them 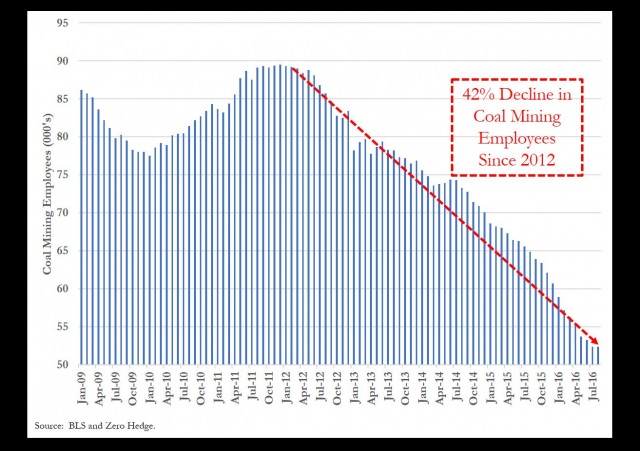 Turns out politicians do occasionally keep their promises. For example, in 2008 Obama vowed to “bankrupt” the coal industry by imposing massive fines on greenhouse gas emissions. Obama made the following comment to the San Francisco Chronicle in 2008:

“So if somebody wants to build a coal-powered plant, they can; it’s just that it will bankrupt them, because they’re going to be charged a huge sum for all that greenhouse gas that’s being emitted,”

Per BLS data, coal mining jobs in the U.S. peaked around 90,000 at the end of Obama’s first term but have since declined by over 42% to around 50,000 as mining companies have filed for bankruptcy and shuttered mines.

Simple, clear graphics are the best.

The x-y graph accompanying this story could be flashed on TVs in Kentucky, Tennessee, Illinois, and importantly in Ohio and Pennsylvania, with the words,

PC is not his middle name…

Coal is a BIG employer (relatively) in the West, too, Prof. 4Fun had a piece up last week on the readers’ forum noting that Oregon had just completed (as I recall) it’s plan to totally cease all coal-generated power.

There’s no replacement, either.

Can you add a link to that piece. I would like to read it.

I charge by the quarter-hour, with a quarter-hour minimum. Let me know where to send the bill…

To be replaced by the green blight advocated by industry environmentalists. The low density, low reliability, non-renewable converters of renewable, intermittent drivers.

And meanwhile, gutless Bitch McConnell did nothing to stop O’Shitbag.