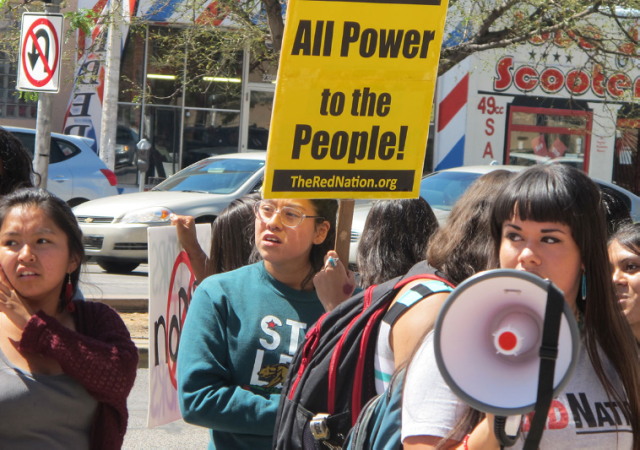 Are you beginning to get the sense that college students are just looking for things to protest?

ALBUQUERQUE — Students and activists at the University of New Mexico (UNM) have renewed an almost 50-year-old effort to abolish colonial imagery on campus, beginning with the school’s official seal. Initiated in April 2016, #AbolishtheRacistSeal — led by the Kiva Club, a student group, and the Red Nation, an activist group — calls for the removal of images that celebrate European conquest of the Americas or otherwise represent ongoing violence against Native Americans. The campaign includes a list of 11 demands to improve Native visibility and viability on campus, while the Kiva Club and Red Nation are also focusing on colonial celebrations elsewhere in the state, such as the annual Santa Fe Fiestas, which took place last weekend.

“The UNM seal directly normalizes and celebrates the violent double conquest of New Mexico,” writes Kiva Club Secretary Jennifer Marley, who is a major in Native American Studies at UNM, via email. “The material equivalent might be found in the celebration of the Santa Fe Fiestas entrada, where a reenactment of the conquest of New Mexico is played out publicly (men dressed as conquistadores ride in on horseback).”

Adopted in 1969, the UNM seal is not ubiquitous on campus, but it is the “most formal symbol” of the university, reserved for diplomas, certificates, and other legal or official documents. It depicts a frontiersman and a conquistador flanking a stylized UNM acronym. The former holds a rifle; the latter, a sword. Their backs are turned to the letters as they stare off in either direction. Above the acronym sits a roadrunner, ostensibly derived from Zia Pueblo mythological iconography, and a banner inscribed with the words “lux hominum vita” (“light the life of man”) hangs below.

Dear Indians: You lost. Suck it up and move on like every other culture has been forced to do since the beginning of time.