Nate Silver: If Hillary doesn’t get debate bounce “Trump could be tough to beat”

Nate Silver: If Hillary doesn’t get debate bounce “Trump could be tough to beat” 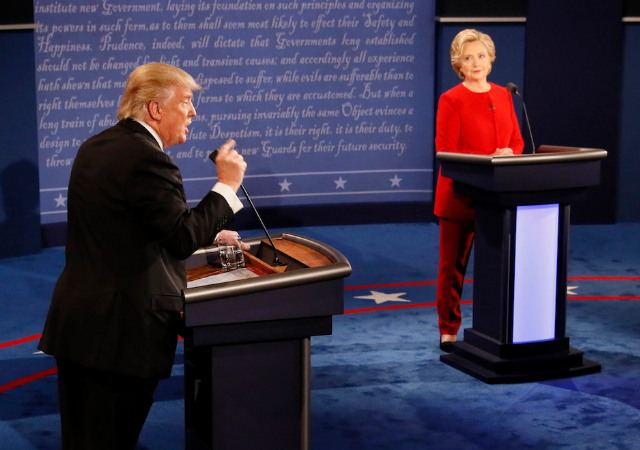 Nate Silver has a few thoughts about the first presidential debate. While he thinks Hillary won the first round, he suggests it may not be enough.

Clinton Won The Debate, Which Means She’s Likely To Gain In The Polls

Democrats woke up on Monday to a spate of bad polls for Hillary Clinton, which brought Donald Trump to perhaps his closest position yet in the Electoral College. They had reason to go to bed feeling a lot better. Clinton bested Trump in the first presidential debate according to a variety of metrics, and the odds are that she’ll gain in head-to-head polls over Trump in the coming days.

Start with a CNN poll of debate-watchers, which showed that 62 percent of voters thought Clinton won the debate compared to 27 percent for Trump — a 35-point margin. That’s the third-widest margin ever in a CNN or Gallup post-debate poll, which date back to 1984. The only more lopsided outcomes were the 1992 town hall debate between Bill Clinton, George H.W. Bush and Ross Perot — widely seen as a maestro performance by Clinton — and the first debate between Barack Obama and Mitt Romney in 2012, when the CNN poll showed a 42-point win for Romney and the horse-race polls moved in his favor in the following days…

What if Clinton doesn’t improve in the polls — or they even move toward Trump? Then that ought to be scary for Democrats, obviously. While Trump’s lack of preparation could also potentially cause him problems in the second and third debates, he showed off some of his worst qualities on Monday night, appearing to be the weaker leader than Clinton and less presidential than her, according to the CNN poll. If undecided and marginal voters were willing to shrug off Trump’s performance, then perhaps they really are in the mood for the sort of change that Trump represents, his faults be damned.

Ok, but mikey moore twitted that Trump won the debate.
Who ya gonna believe?

There cannot be a winner because you can’t compare apples to bananas.

Hitlary enthusiasts see her as a winner because she displayed the kind of behavior that they are expecting of her: a fake-ass hypocrite, a professional establishment politician. The same crap so many of us are tired of.

Trump enthusiasts on the other hand saw what they wanted: an outsider defiant of the establishment, one who calls it as he sees it with no regard for politically correct bull, and who is the only viable chance to disrupt the corruption going on in Washington.

Media is using the EXACT SAME tactics against Trump that they did against Bernie Sanders. Outlets proclaim Clinton wins debate, go against their own poll results.
http://imgur.com/kwUIpTJ