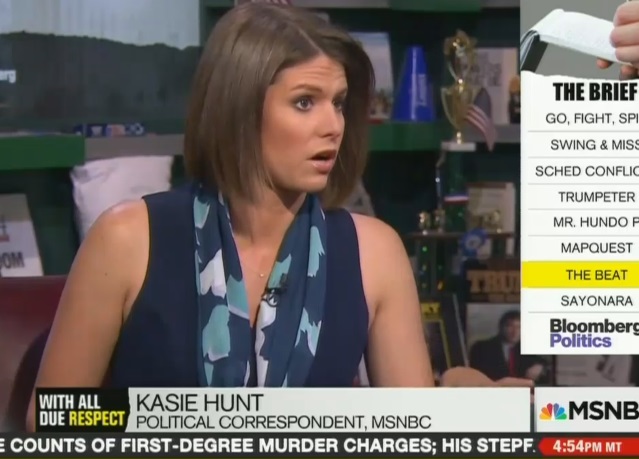 Kasie Hunt seemed almost reluctant to report it, but something she said this evening might make you think that the Clinton campaign remains worried about Hillary’s health. Appearing on With All Due Respect, Hunt—MSNBC’s Clinton campaign embed—was asked whether she expects Hillary “to have a lot of down days” in preparing for the next debate, or whether she’d be out on the campaign trail like Trump.

Here’s Hunts’s response. “My sense is that they do feel like they need to make sure that she is out there, on the one hand. But I think they think it’s very important that they balance that with making sure she gets enough rest. Frankly.” Frankly? Why would a reporter be hesistant to report that fact? Does Hunt not want to suggest that the campaign is worried about Hillary’s health?

Hillary seemed physically fine during last night’s debate. But in recent days she’s appeared fragile on occasion. Beyond any gaffe, or even scandal, it is Hillary’s health that casts the largest shadow over this campaign. One more bad coughing bout, not to mention a repeat of her 9-11 collapse, and it could be curtains for Clinton.

“One more bad coughing bout, not to mention a repeat of her 9-11 collapse, and it could be curtains for Clinton.”

Literally. Even if you’re fool enough to believe the pneumonia story, her health has declined noticeably this year. If she wins the election, it seems unlikely she will actually serve a full term. She’s just not up to it.

Perhaps that is why Billy Jeff supports her election? To free him up even more for nookie patrol?

First, I refuse to vote for a president who has to be lead around by a laser pointer.*

And, secondly; does this sound like a healthy presidential candidate just coming off of a successful nation-wide debate of over 100 million viewers, “Clinton Runs from Reporters After Debate, Trump Speaks with CNN and Fox News.”**

And, thirdly, like, who are you going to believe, Hillary campaign physician or your own eyes?

Just for the sake of basic human decency—not to mention, respect for the English language—nobody pushing Team Hillary should use words like “frankly”.

Leaving the channel for a couple minutes, I returned only to find that she kept nodding as he spoke. I’ve not noticed this behavior by her previously. They better give her some reat orshe’ll be suffering from whiplash.