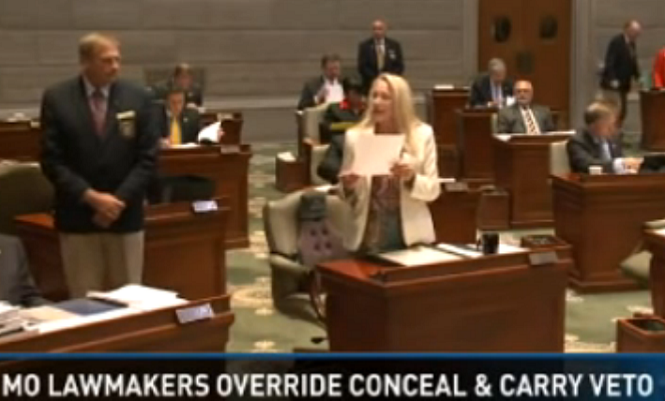 Missouri lawmakers have overridden a veto to allow concealed carry (Missouri already had open carry) and to grant more legal rights for self-defense.

Missouri lawmakers have overridden a veto of a wide-ranging guns bill that will let more people carry concealed weapons and give them greater legal rights to defend themselves.

The Republican-led Legislature enacted the law Wednesday by a 24-6 Senate vote and a 112-41 vote in the House. Both exceeded the two-thirds majority needed to override the veto of Democratic Gov. Jay Nixon.

The legislation will allow most people to carry concealed guns without needing a permit. That means they won’t have to go through the training currently required for permit holders. Missouri will join 10 other states with what supporters describe as a “constitutional carry” right.

The measure also expands legal protections for those who use deadly force to defend themselves in both public and private places.

The bill, SB 656, has generated mixed response from the usual suspects.

The Missouri chapter of Moms Demand Action for Gun Sense in America, part of Everytown for Gun Safety, issued a statement condemning the Republican state legislature for “caving” to pressure from the “gun lobby.”

“Missouri lawmakers buckled to the NRA instead of listening to the vast majority of Missouri voters, including mayors and law enforcement leaders, who support our current concealed carry  permit system. And in doing so, they made our state the first new Stand Your Ground state since the death of Trayvon Martin.

As if opposing lifesaving policies like criminal background checks on all gun sales wasn’t bad enough, the gun lobby continues to push to put more guns in more places, with no questions asked — laws that make the jobs of those who serve and protect us more difficult and more dangerous. Despite the clear message from law enforcement leaders about this bill’s risk to  public safety, the NRA leadership made SB 656 its top national priority.

The New York Times, not to be outdone in hysterical rhetoric, entitled its editorial about the veto override “Missouri: The Shoot-Me State.”

In an alarming victory for the gun lobby, Missouri’s Republican-controlled Legislature voted Wednesday to override Gov. Jay Nixon’s veto and enact a wholesale retreat from gun safety in the state.

The law will let citizens carry concealed weapons in public without a state gun permit, criminal background check or firearms training. It strips local law enforcement of its current authority to deny firearms to those guilty of domestic violence and to other high-risk individuals. And it establishes a dangerous “stand your ground” standard that will allow gun owners to shoot and claim self-defense based on their own sense of feeling threatened.

The NRA has responded to the veto override with the following statement:

“This is a great day for freedom in Missouri. The legislature stood strong for the constitutional rights of law-abiding citizens by overriding Gov. Nixon’s misguided veto,” said Chris W. Cox, Executive Director of NRA’s Institute for Legislative Action. “Despite the best efforts of Michael Bloomberg and out-of-state gun control groups to defeat the override vote, their agenda was rejected.”

Senate Bill 656 will allow anyone legally allowed to possess a firearm to carry that firearm, while also maintaining the current permit system. In addition, the bill:

That said, the Pro-Choicers can rest easy, abortion rites can still be practiced under their quasi-religion received from the twilight zone. Under the State-established Church, and instruction from liberal judges, they can still terminate/abort, cannibalize/plan wholly innocent human lives for causes of wealth, pleasure, leisure, and narcissistic indulgence.

An armed society is a polite society. Expect the use of the words “please” and “thank you” to increase in daily use.

See Robert Heinlein, “Beyond This Horizon”, placed in a society where carrying is the norm. I didn’t particularly like the novel as a story but the picture of a society where everyone is polite and the unarmed need to be very careful is very interesting.

By the way, I’ve noticed the politeness you mention at gun shows. At radio amateur hamfests you can get run over but at a gun show, it’s, as you say, “Please, thank you, excuse me” and of course the customers aren’t armed so they don’t have to be nice.

Hey NYT, how about allowing some time to evaluate the results before making such stupid unsupported statements? In many states with open carry laws, the violent crimes have gone DOWN not up. But that wouldn’t fit your narrative would it?

They’ve never bothered to evaluate the evidence before; why should they start now? The left runs the “blood in the streets/shoot-me state” meme every time such laws are passed, but their fears never materialize. You’d think they would learn… oh, wait.

The irony is the corrupt employees of the NY Times are more likely to get shot in NY by the criminal scum they work so hard to embrace, than by the good people of Missouri.

If the corrupt NY Times doesn’t like the shoot me state, they don’t have to visit.

“And it establishes a dangerous “stand your ground” standard that will allow gun owners to shoot and claim self-defense based on their own sense of feeling threatened.”

Uhh, the right to claim self defense because you feel threatened is a part of basic self defense and has nothing to do with SYG, lol.

“Uhh, the right to claim self defense because you feel threatened is a part of basic self defense and has nothing to do with SYG, lol.”

Actually, it’s not “because YOU feel threatened”, but rather whether “a reasonable person” would feed threatened in the same situation. If your fear is unreasonable, you don’t get a free pass.

Actually the right to “claim” self defense is based on your feeling. Whether or not you are “granted” that protection is where reasonableness comes in, but it has to begin with your fear of great bodily harm or death. Since you seem to want to play silly semantic games.

SB656 had a number of positive provisions. It established Stand Your ground. It expands the Castle Doctrine, in self defense cases. It clarified what Sheriffs could charge for a concealed carry permit and how those funds could be used. It provides extended renewal periods for active duty personnel serving outside the state.

The only provision which was controversial was the one allowing for concealed carry w/o a permit. And, the only reason that was controversial is because Missouri allows local jurisdictions to require a permit to carry a firearm openly, but there is no provision in the law to allow the same thing with concealed carry. In order to alleviate this seeming dichotomy, expect to see this issue visited in the next legislative session. I would expect to see an attempt to change section 21.790, of the Missouri statutes, to include concealed carry, as well as open carry. This would be relatively easy to accomplish by simply removing the word “open” from the term “open carry”, in that statute. The only other way to make the two means of carry equivalent is to amend that statute to eliminate the need for a permit to open carry in jurisdictions where it is prohibited. We’ll have to see what happens in the next legislative session.

Now, except for complicating the job of LE, this provision will not have much effect on the populous. It has been amply demonstrated that most people, even in jurisdictions where general weapons carry is allowed w/o a permit or license, that the vast majority of people do not carry a firearm regularly. This is especially true in developed areas. So, no blood running in the streets and no significant drop in criminal assaults.

Speak for yourself. I’m much more likely to carry here in TX since I can’t be arrested for someone noticing I have a gun.

There is nothing in this world that would ever make me go to New York City.

Heh. I was born there – Richmond Hill, Queens. Haven’t been back since 1976, except to change planes at JFK once in ’92.