Maybe Instead of Studying, Hillary Was Polishing Bill’s Car 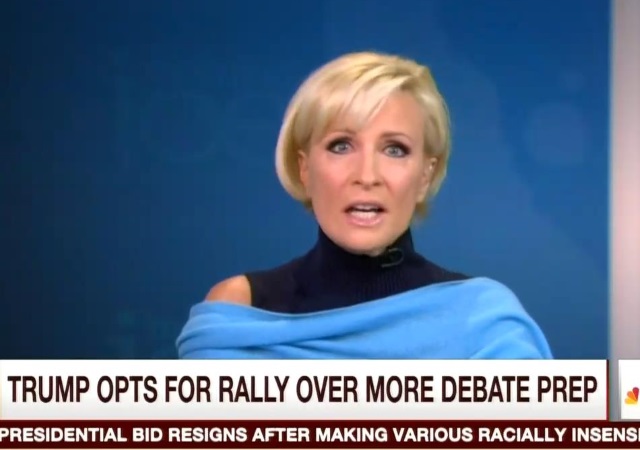 Mika Brzezinski used an unfortunate metaphor on today’s Morning Joe to describe Hillary and Trump’s different approaches to preparing for Monday’s first presidential debate. Said Mika: “you think of like the two law students preparing for the bar. The guy is polishing his car to calm down. And the girl is studying up to the last minute.”

Mika is apparently unaware that Hillary flunked the DC bar exam after graduating from Yale law school in 1973. 67% of the people taking the exam at the same time passed, putting Hillary in the bottom third. Maybe instead of studying, she was too busy . . . polishing Bill’s car.

Yesterday, having a friendly argument with a good friend, he explained his support for Hillary partly in terms of the fact that she’s “incredibly intelligent.” Really? As Rush Limbaugh likes to say, just how smart, really, is The Smartest Woman in the World?

Note: Mika employs a gender stereotype that would get most male pundits into hot water. And for good measure she refers to the woman taking the bar exam as a “girl.” Paging Gloria Steinem!

DONNY DEUTSCH: What Hillary has got to do is on the one hand, I think, prosecute, moderate, rope-a-dope, and then Google. Let me talk about what I mean there. In terms of, basically, she has to have a very measured tone. She can’t come out at him. She’s got to poke, poke, poke, hope that in some way he punches back.

MIKA BRZEZINSKI: I will just say before we laugh about him doing rallies and not preparing, you think of like the two law students preparing for the bar. The guy is like polishing his car to calm down and the girl is studying up to the last minute. And that’s what, it’s just different ways of —

I’ve seen many a smart person fail the bar exam. They were overconfident and didn’t prepare. Its not a test a test of intelligence. Its a test of preparation.

I have a paralegal acquaintance who has failed the bar exam many times, though he knows the material quite well; better than many lawyers I know.

I had a surveyor friend who could not become certified in Texas, though he was a very competent surveyor.

As is the Presidency.

It is equally an exam of one’s discipline, intellect and stamina during the exam.

Clinton has none of those attributes.

I don’t care so much about her DC bar exam: she failed the subsequent tests of ethics in real life, at the State Department, where it counts.

In her defense of her relationship with the Clinton Foundation while she was SoS, she claimed there was no unethical or improper conduct. She doesn’t understand that an office-holder can’t even present the appearance of impropriety.

True, but pursuing that line of argument means conceding her point, that there was no actual impropriety, and I suspect that’s what she wants to achieve. She wants to turn a case of outright quid-pro-quo bribery into one of failure to be careful enough about appearances. This seems to be her standard tactic every time her corruption becomes an issue; make a flawed excuse, so as to turn that into the issue.

Agreed, and I did offer the alternative explanation: Hillary was too busy polishing Bill’s car 😉

Since then Bill’s car have been polished down to the primer by numerous women. She must not be an accomplished polisher.

Its the earpieces stupid.

I do expect Trump’s team to be electronically looking for Hillary’s earpiece (if there is one).
She will get an ear full. I’m sure.

I didn’t know she failed the DC exam. Is the DC exam known to be a difficult one?

Being from California I don’t typically judge people on bar failures (except Antonio Villaraigosa, he just dumb) but I’ll make an exception here because I don’t like Hillary.

At the time Hillary took it, the DC bar exam was considered to be one of the easier bar exams. Many wannabe lawyers who were planning to practice in nearby states would take the DC bar exam and then use their DC admission to waive in to the state bars, which allowed them to avoid taking the tougher bar exams in states like Virginia.

Just because sycophants say someone is intelligent, that doesn’t make it so, Example:Chairman O. I have known many educated idiots.

If the media wasn’t constantly citing the unproven assertion that she’s a super genius this wouldn’t matter.

Hillary’s intelligence is as well-attested to as her health.

I assume no earpieces allowed… Does anyone know for a fact..? And will Hillary be checked because allowed or not I’d be pretty damn certain she would have one in…

If she does have an earpiece, Trump’s ream has three options:
1. Do nothing, just challenge her on it and emabarass her on it live at the debate.
2. Jam it with an irritating signal to drive her nuts, or possibly trigger her “dehydration” attacks.
3. Override the signal and give her nonsense to parrot.

The last could be hysterical!

Same with Obama. In 2008 there were constant online “ads” about Obama’s genius level IQ (as compared to all the other presidents except Bubba who were deemed to be average or idiots). No proof. No grades or scores have leaked. We don’t even know what classes he took in college. Nobody even remembers seeing him at Columbia. You can’t use his speeches because he just reads them off the teleprompter. It’s not even clear that he writes them. When he strays off prompter, bad things happen or there’s just a lot of hemming and hawing. The IQ assessment just based on looks, I guess.

Nobody even remembers seeing him at Columbia.

This is not true. Several people do remember him there, including two of his roommates and one of his teachers.

So now Mika’s counting her chickens before they debate, huh?

The smart money would say that Hillary’s not studying, she’s passed out in a drug-induced stupor.

partly in terms of the fact that she’s “incredibly intelligent.”

A strange fantasy. The Inevitable One doesn’t do or say anything notably intelligent. To the contrary, her claim re Gaddafy, “We came, we saw, he died,” may be the single stupidest thing any American politician ever said—and that includes Warren Harding.

In many years in science and engineering (yes, including “rocket science”) I’ve encountered a few unusually intelligent people. I’ve seen no indication that Hillary is one of them. Her Hubby shows signs of intelligence; too bad he never used it. (A life of crime and debauchery, even a successful one, doesn’t count in my book.) Hillary is more monomaniacal and driven than Bill, but nowhere near as intelligent. You could make a good argument that she’s always been the driving force behind the duo, with Bill just the front man. That doesn’t make her intelligent; it makes her a talented crime boss.

You could make a good argument that she’s always been the driving force behind the duo, with Bill just the front man.

Hillary’s problem appears to be: While she can be told something, witness something or even sign something, at a later date, she just can’t recall anything.

Is Mika’s picture a booking picture?

Water carriers..ALL of them!
Hillary’s Healthy, Smart, Tested and True..What’s not to Love?

Who needs the Bar to succeed ?.Hillary does quite well with Barbells.