What Would Happen to a Conservative Pundit Who Suggested a Dem Candidate was a ‘Pansy?’ 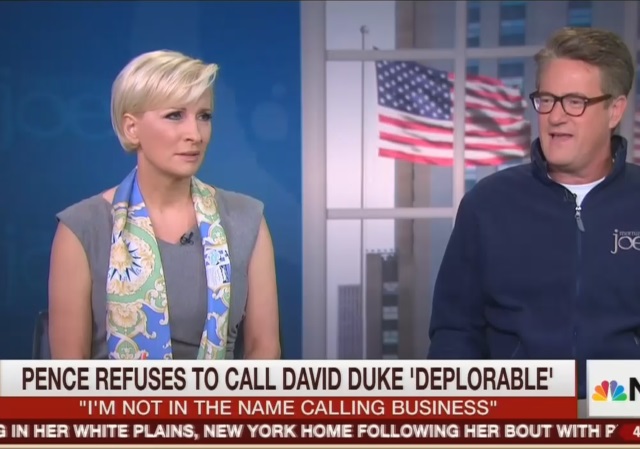 Can you imagine the absolute outrage on the left if a conservative pundit suggested that a male Democrat candidate was a “pansy?” The cries of “homophobia” would echo through the land, amidst demands that the offending pundit be defenestrated.

But on today’s Morning Joe, Mika Brzezinski wondered out loud if Mike Pence is a “pansy.” And you can just hear the liberal crickets gathering to say . . . absolutely nothing about it. Brzezinski’s beef is that Pence, while denouncing David Duke, has declined to use Hillary’s word—deplorable—to describe him, and has failed to be sufficiently critical of Putin.

Mika claimed that Pence is “scared of his boss”–Donald Trump. So Mika, care to expand on your use of the word “pansy?”

MIKA BRZEZINSKI: The meetings on Capitol Hill [between Pence and congressional Republicans] came a day after Pence refused to call David Duke “deplorable” during an interview. He was pressed on the issue again during a news conference yesterday.

MIKE PENCE: For all the world I have no idea why this man keeps coming up. Donald Trump and I have denounced David Duke repeatedly. I was asked a question about that. And I repeated that again. The simple fact is that I’m not in the name-calling business. But I’m also not going to validate the language that Hillary Clinton used to describe the American people.

JOE SCARBOROUGH: By the way, this isn’t like third grade: nanny, nanny, poo-poo: they’re trying to make me say “deplorable.”

MIKA: He’s scared of his boss.

NICOLLE WALLACE: Name calling gets a bad rap, but it exists for David Duke.

MIKA: Trump must be Putin-like in the office, because seriously, Mike Pence has a loss of words.

WALLACE: Russia’s getting worse, not better, and [Trump’s] love for him [Putin] grows all the same.

MIKA: Is Mike Pence, is this new for him, or is he just kind of like a, sort of, a pansy?

Like little Barry Soetoro…wrists of a 12 year old girl

Remember the song “Dueling Banjoes”? These two are “Dueling Nitwits”!