What Would Mika Say About Hillary’s Apparent Incapability of Telling the Truth? 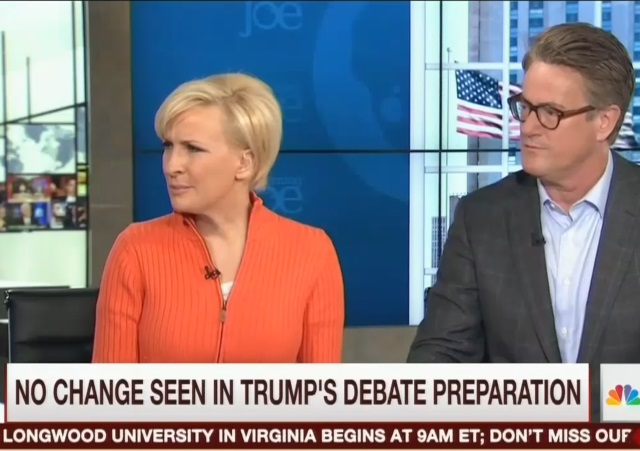 Mika Brzezinski prefaced her remarks by saying she wanted to phrase them “carefully,” but then, in the most careless way, Brzezinski clearly accused Donald Trump of being mentally ill.

On today’s Morning Joe, reacting to a depiction of Trump by New York Times reporter Jeremy Peters as being incapable of taking criticism of his performance, leading his advisers to communicate with him via the media, Mika said that was “very sick” and “it sounds like they’re dealing with someone who, doesn’t—how do I say this carefully—is very troubled, is very disturbed.”

Note: Peter’s premise is that Trump can’t take criticism, and so his aides communicate with him through the media. But his first example does nothing to prove that. He describes Kellyanne Conway praising Trump’s debating ability in the media.  So Trump can’t take flattery, either?

JEREMY PETERS: He’s utterly unable to process anything critical about his performance. And this has become a problem for the people who are supposed to be advising him. The advice that he will not take. So when he goes and lambastes these anonymous sources, part of the reason these anonymous sources are saying what they’re saying and part of the reason you hear his aides go on TV is because this is the only way that they can talk to him.

They can’t get through to him unless he sees them on the television or reads them in the newspaper so when Kellyanne Conway is saying Trump is the Babe Ruth of debating, she’s saying that because she knows Donald Trump will be listening and it will prop up his ego. And when aides are leaking things that are critical about his performance in various news reports —

PETERS: — because he won’t hear it any other way.

MIKA: That sounds kind of like, Robert Costa, it almost sounds like they are dealing with someone who’s, doesn’t — how do I say this carefully? Is very troubled. Is very disturbed.

This I believe as much as Trump believed in a couple National Enquirer stories.

The old Obama question is starting to raise its ugly head: Insanely incompetent or merely insane?

It’s amazing to me that those two (really bad word) have enough viewers to keep the lights on. They are as shallow as a child’s wading pool and just as full of hot air.

It’s because everybody blindly keeps paying their cable bill. Cabling bundling means that shows like this get a slice of every cable subscription fee. Every time you write that check to Comcast (or whatever), you’re paying this vile shrew’s paycheck.

Scott Adams of Dilbert is the only pundit who understands Trump. He predicted all this a year ago. I do not know if Trump will win, but I have noticed he has confounded the expectations of everyone except Adams.

I personally suspect that Trump is one of those rare populists who seize the moment. He’s neither a genius nor stupid, but he has nailed this moment in time.

Is Mika craving some attention from The Donald? She’ll just have to get in line because he’s apparently still on his days old obsession with Ms. Machado. Middle of the night tweets must mean his Miss Piggy has really gotten under that ultra thin skin of his. Not to worry though, #NeverHillary answers all criticisms of The Donald. Somebody needs to float that memo in front of Mika again.

If you think Trump has thin skin, then you just don’t understand how gutless the rest of the GOPe is. No other “Republican” would dare hit back like him. Trump fights like a Democrat. I’m sorry that spreads massive fear in such fragile snowflakes.

Trump certainly does have a formidable army of spinmeisters and apologists. No doubt about it. He is by far Hillary’s better when it comes to practicing the artful politics of personal destruction. All criticism must be countered and those who persist must be destroyed. What is viewed as a character flaw in a Clinton has somehow become a virtue for Trump. Says a lot about his rabid fan base.

Seeing Trump for who he is has nothing to do with fear or fragility. Being a slightly better choice than Hillary Clinton doesn’t change who and what he is in the least. What we’re really discussing here are two candidates among the worst to ever seek the office. The need to keep Hillary from winning in no way mitigates the fact that Trump is a walking, talking shit show.

This is about hyperbole which agreed is generously applied in both directions. But “Seeing Trump for who he is has nothing to do with fear or fragility” leads me to conclude that you agree that he is insane. If I thought a candidate were insane I would not consider them a slightly better option.

Not insane, just an ultra-wealthy man whose money has kept him well insulated from meaningful criticism his entire adult life learning to play a new game that’s all about criticism. To his credit his tolerance for non-sycophants does seem to be improving somewhat.

Mika’s not on real sound ground herself. Whines a lot.

Not sure why LI has chosen this particular noise maker as a morning lightning rod, possibly due to the fact that she is exemplary. This is just an extrapolation of “deplorable” for his supporters and is the softer side of pinko-styled dehumanization. What does it take to trigger slander codes anyway? I’m sure that they are coached on how to skip on the perimeter. I’m sure that if Grandma wins, she’ll call for a period of healing afterwards, but maybe not. Don’t much matter, liberals have crossed the line in the sand.

I seem to remember a great number of the left moaning and groaning every time one of Hillary’s documented erratic behaviors popped up, about how we weren’t psychologists and how could we dare to call her crazy. They even did it when actual psychologists remarked on her behavior.

Last night, I saw two CNN stories at the gym.

One was headed “Trump criticizes beauty queen,” which was disingenuous, as shown by a link I already posted in another thread.

The other was Trump Foundation broke the law by investing in Cuba, debunked in today’s San Diego Union-Tribune, which quoted the original reporter as saying that the original reporter, Kellyanne Conway later told the Washington Post that she “did not say he broke the law or violated the embargo.” This statement was several column inches below the headline “Report: Trump Broke Cuban Embargo.” The San Diego Union-Tribune holds its print articles, so it is likely not available, yet. The Washington Post puts its stories behind a paywall.

In the San Diego Union-Tribune, there was an editorial on the front page “Trump invokes Bill Clinton’s Infidelities” saying without a quote (big, red flag, there) that a Clinton victory would “bring her husband’s sex scandal back to the White House.” Missing from all of the coverage is the context for this story, namely the leak of a Colin Powell email alleging (his language, not mine) that “Bill Clinton is “still dicking bimbos.” So the Union-Tribune is pretending that this statement was made completely out of the blue.

Left Planned to Stage Violence to Bring Down Trump
PowerPoint playbook on the messaging — slide number 6 — with the messaging theme number 1: Violence.

Their theme is that Donald Trump and his supporters are crazy, and their method is to use their media allies to spike half the news stories, so some people will not know how the stories arose, in the first place.

CNN deserves the boycott they have.

Yellow journalism in this vein works, especially in the target demographic, white women with a general axe to grind, and gender benders. In the former case its because they need to excuse their visceral craving for what they perceive as an alpha female to right their wrongs, real or imagined. In the latter, because they are pretty much a mess in all domains.

There is NO truth to the rumor that rags has asked her to marry him.

Mika is the one who appears to have mental health issues.

Eleven billion dollars of sick. Compared with the two grifters, who upon leaving the White House “Dead Broke” made their way to a 200 million dollar net worth in just seven years on a $207,000 per year salary for just 4 of those years.
A very good reason for the next Liberal president to extort and expropriate all the incomes earned by anyone above the certain income level to prevent another Donald Trump from self financing his/her run for the presidency and upsetting the uniparty’s governing apple cart.
Tom Donahue, Paul Ryan, George Soros are all very upset at Mr Trump’s success, so far.

Funny…I don’t remember Trump being declared “Not mentally competent to stand trial” by the DOJ as Granny has effectively been recently.

Nuts and sluts. right out of the Democrap playbook.