Local news outlet: Oh, and that Trump guy’s a bigot, too. 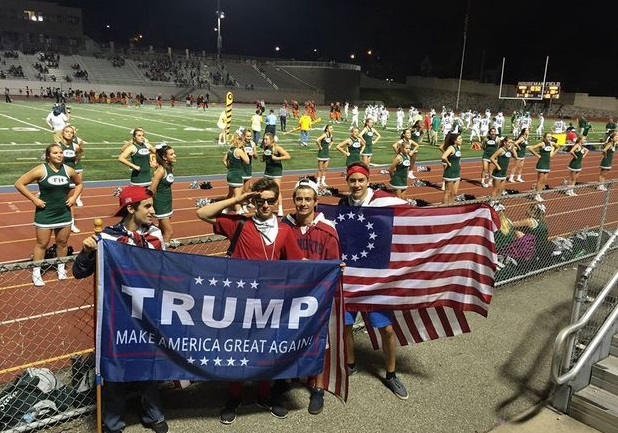 A high school football game in Michigan gained national attention when its school district Superintendent apologized for the display of a Betsy Ross flag.  He stated that it symbolizes “exclusion and hate.”

Forest Hills Superintendent Dan Behm has apologized for the actions of a group of students who upset many during a Friday Grand Rapids football game by brazenly waving a Donald Trump political flag and a “Betsy Ross” 13-star flag.

. . . . Behm said the lessons we learn as youth is that if our actions cause harm to others, the impact is the same regardless of one’s intent.

“Injecting partisan politics into a community football game and into a commemoration of the events of September 11th is inappropriate,” he said, noting that the actions of some and the inaction of others brought disrespect and confusion to many.

“Parading our current United States flag in a manner that is inconsistent with proper etiquette is disrespectful to all who have served our nation. And, to wave a historical version of our flag, that to some symbolizes exclusion and hate, injects hostility and confusion to an event where no one intended to do so. To our gracious hosts—the students, families, staff, and community of Grand Rapids Ottawa Hills High School and Grand Rapids Public Schools—and to the student-athletes, coaches, officials, and supporters of both teams, we are truly sorry.”

Republican presidential candidate Donald Trump has been criticized by members of both political parties for bigotry and racist rhetoric. The Betsy Ross flag is controversial, in part, because it is embraced by white nationalist organizations whose members claim a superior birthright.

The only ones pushing exclusion and hate are the libtards. They’re really sick and need psychiatric help.

According to this idiot the kids need to learn that they are responsible for the “feelings” of everyone around them:

“”Behm said the lessons we learn as youth is that if our actions cause harm to others, the impact is the same regardless of one’s intent.””

So, kids: do nothing, lest ye offend!