Merkel: We Have to Demand Integration of Refugees

Merkel: We Have to Demand Integration of Refugees

German Vice Chancellor: “There is an upper limit to a country’s integration ability” 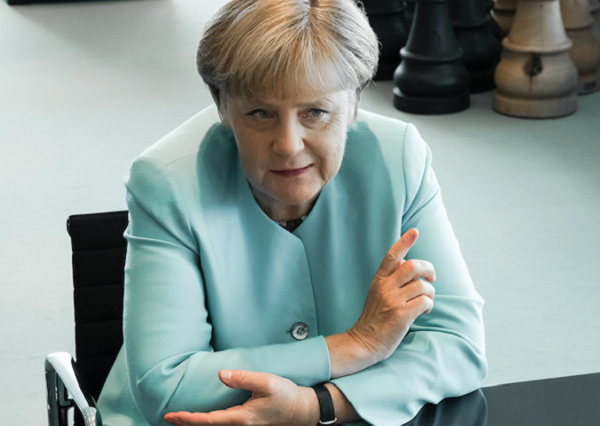 In July, Germany passed a new law that “requires” the integration of the over one million refugees who’ve flooded into Germany in recent years.  The plan includes subsidized classes in how to act like a civilized human being, a requirement to learn German, and temporary lifting of the requirement that immigrants can only be offered jobs if there is no German or EU worker for the position.

Despite all evidence to the contrary, Angela Merkel is still clinging to her integration pipe dream.  In an interview with Germany’s BILD newspaper, Merkel explains that integration can include things like providing a simple explanation of how things are done in Germany.

BILD: What we did indeed manage is primary help for over one million people. The bigger challenge is yet to come: how do we integrate that many people from an entirely different culture, after having failed, to a large degree, in many aspects of this task over the past decades?

Merkel: Fortunately, we have learned a lot from the past, primarily that language is the key to successful integration. The younger people are, the easier it is for integration to succeed. It is worth facing this effort. I would like to use the opportunity to thank everybody who is working towards the success of this integration. This is not only the state authorities, but primarily the countless associations, initiatives, and voluntary helpers.

BILD: What would you say to a Muslim who does not want to shake your hand?

Merkel: I would talk to him about the fact that it is common here to shake each other’s hand.

Merkel also pushes aside concerns that her policies lose sight of the country’s own people.

BILD: Many citizens are concerned that your care for the refugees makes you lose sight of the population’s worries. One popular example: is it okay if a pensioner in Germany receives less from the state than what, for instance, an unattended, underage refugee costs?

Merkel: The difference between pensions and youth welfare expenses applies not only to refugees, but also to German underage children, for instance those who need to stay in a youth shelter. The Federal Constitutional Court has determined standards and guidelines for minimum provisions for refugees. We comply with these and have not cut anybody’s benefits in Germany because of the refugee aid. On the contrary, over the last few years, there were several social improvements. We were able to finance all of this, because of our longstanding, responsible fiscal policy. So there is no reason for jealous debates.

Asked about the hundreds of thousands of refugees that Germany has lost track of, Merkel discusses improving registrations.

BILD: How is your sleep when you think of the fact that our security services do not even know the identity of thousands of refugees?

Merkel: The Federal Office for Migration and Refugees is working very hard on gaining a complete overview of the registrations very soon. However, we should also not forget that there were attackers who were already registered as refugees. This fact has shown us that the simple Eurodac registration is not enough – it has to be combined with other databases, such as the Schengen Information System, where criminal and terrorist activities are registered. The Ansbach and Würzburg attacks – whose offenders were properly registered – have also shown that we need better early warning systems. On the European level, we should start working on an electronic entry control system modeled on the US system. This means that – regardless of whether they travel visa-free or not – anyone who enters a European country and who leaves again is registered, so that you know exactly who has not left and is still somewhere in the Schengen Area.

It goes without saying that our “electronic entry control system” is flawed; we have no idea where millions of illegal aliens are, including those who are caught by Border Patrol and then released if they aren’t convicted felons and those who come in legally and then overstay their visas.

BILD: With the Ansbach and Würzburg attacks, the worst fears have become reality: that, among the refugees, Islamist terrorists could also have entered the country. Can you understand why many citizens are saying: “We will manage” – this is no longer good enough for us?

Merkel: The idea that “we will manage” highlights that this was, and is, a particularly great challenge and that we are motivated and want to overcome any obstacles on our way. For a long time now, Germany has been exposed to the threat of Islamist terrorism – not only since Ansbach and Würzburg. We know that jihadists from Germany, too, went to Syria, were trained by IS and then, partly, also returned here. Moreover, we know that not all refugees came here with good intentions. In general, we have to be very vigilant, since Islamist terrorism represents great challenges for our security services. However, we should never forget that the vast majority of Syrians and Iraqis fled to us from war and terror and oppose violence and extremism as much as we do. I still understand that many people are concerned after Würzburg and Ansbach. We are therefore facing two great tasks: on the one hand, we have to integrate everyone who will stay with us for a longer period of time or permanently. We also have to demand that they are willing to integrate. On the other hand, we have to do everything that is possible to fight Islamist terrorism and to prevent attacks.

Merkel is really enamored of this integration plan, but Vice Chancellor Sigmar Gabriel has done the math.

German Vice Chancellor Sigmar Gabriel said in an interview on Saturday that Chancellor Angela Merkel’s conservatives had “underestimated” the challenge of integrating record numbers of migrants.

Gabriel leads the Social Democrats (SPD) — the junior coalition partner in Merkel’s government — and his comments come as campaigning kicks off for a federal election next year and regional elections in Berlin and the eastern state of Mecklenburg-Vorpommern.

. . . .   “I, we always said that it’s inconceivable for Germany to take in a million people every year,” Gabriel said in an interview with broadcaster ZDF.

“There is an upper limit to a country’s integration ability,” he added at a news conference on Sunday.

He said Germany had 300,000 new school children due to the migrant influx and added that the country could not manage to integrate so many into the school system every year because there would not be enough teachers.

Merkel’s response is the type of oversimplification that we’ve come to expect from the left:  it’s either open borders or no Muslims at all.

Merkel rejected Gabriel’s criticism in an interview with broadcaster ARD and said the federal government had worked hard with state and municipal authorities to solve problems, changed laws and provided funding.

She suggested she was open to changes in the EU’s planned quota system, which aims to transfer of about 160,000 asylum seekers from Greece and Italy to other EU states, but said it was important to find a solution that shared responsibility.

It would not be acceptable, Merkel said, for governments to say: “We don’t generally want to have Muslims in our country.”

Merkel apparently forgets that when the refugees started flooding into Germany they were met with “euphoria and a welcome culture,” and that subsequent criminal acts by refugees and her government’s ineptitude—not the German people’s xenophobia—have prompted the change in Germans’ attitudes.

BILD: One year ago, euphoria and a welcome culture prevailed. Now this is superseded by a deep skepticism. Do you think that the majority of Germans still supports your refugee policy?

Merkel: In politics, there are always decisions that one has to make without carrying out an opinion poll first. With the results of our work, of course I hope to, in the long term, convince as many people as possible that our way is the right one.

These barbarian invaders must abandon Islam if they are going to be integrated into German society.

German woman have the ability to satisfy the lust of the Muslim barbarians. The barbarian Muslims have the need that can only be satisfied by rape.

Socialism is symbiotic with Islam.

…Merkel explains that integration can include things like providing a simple explanation of how things are done in Germany.

That might work, if they also add: And if you don’t like how we do things here, then you can go somewhere else.

And don’t accept ‘no’ as an answer.

….and after a few years, the argument becomes, “They’ve been here for so long, we have to keep them.”

Note that in the last Q/A the implied answer to the question whether the majority of Germans support her refugee policy is “no,” although she hopes to turn that around. The sheer arrogance …

These are the people that ridicule others for lack of intelligence.

And even when reality proves them wrong, they will continue to lecture about what is right, and show how foolish they are.

Appeasement and debasement of your own people hardly seems like assimilation of muslim invaders.

What Merkel really said: “You will be in goosestep with me!”

She just might as well don a burka and declare jihad against Germany and the rest of Europe, because, in effect, that’s about what her actions amount to.

Good luck with that. The refugees came to assimilate you!

She could also demand that Obama and Clinton address their social justice adventurism that destroyed these people’s nations, homes, and lives. Her solution is to invite mass emigration to coverup for the humanitarian disasters caused by Obama and Clinton’s progressive wars. The same as mass emigration and illegal immigration to coverup (and condone) the corruption and dysfunction in second and third-world nations.

Merkel is a fine example of the global “Elite” that tell the rest of the world’s population how we should live. obama and hillary belong to this club as do many of the EU gang in Brussels. For some reason, they seem unable to see the world the way it is but only the way they want it to be. One thing that cannot be taken away from us is our common sense. We all know that our own experiences in our lives mean more than any opinion from a person who has never walked in our shoes. If Merkel would just take a plane ride around the muslim world, maybe she would learn that they do not assimilate ANYWHERE!

It closes with “In Germany, people will come together who have developed an intelligent attitude to our land and its development, independent of Right or Left.

And the greater their numbers become, that much sooner, Mrs. Merkel, will your mission be at an end.”

Merkel: “We also have to demand that they are willing to integrate.”

This seeming belief that reality will align with a leader’s demands reminds me of an exchange in one of Shakespeare’s plays: Henry The Fourth, Part I Act 3, scene 1:
Glendower:
“I can call spirits from the vasty deep.”
Hotspur:
“Why, so can I, or so can any man;
But will they come when you do call for them?”