He never said it was a birther press conference!! 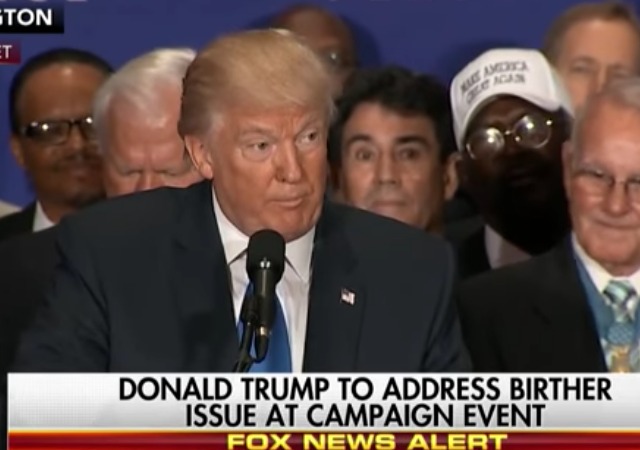 So the media lost their minds on Twitter when they arrived at a Donald Trump birther event, only to hear from veterans and why they support Trump. Ehrmahgerd, Trump tricked them!!! Or did he?

That is all he said. So of course the media complains about hearing from war veterans.

That was probably the lowest point of this campaign so far. I’m truly disgusted.

Make no mistake: trump hid from questions with veterans as human shield

Teased? He never mentioned it!

Has Trump pulled a bait and switch on the cable nets? Teased a big birther announcement. Then puts up vets who praise him.

"We got played again," @JohnKingCNN says on CNN.

Yes, so awful considering Trump never said he was holding a birther event.

Today is actually POW/MIA Day to remember those who never made it home.

Today we honor those who were POW and MIA.

Take a moment to reflect on this National POW/MIA Recognition Day. pic.twitter.com/avAW25TdNc

But no. Let’s complain about hearing from people who sacrificed so much to keep our country free and safe. How awful of them for wasting your precious time.

Trump did address the birther issue in a one minute statement:

“Hillary Clinton and her campaign of 2008 started the birther controversy. I finished it,” Trump said in Washington, D.C. “President Barack Obama was born in the United States, period. Now we all want to get back to making America strong and great again.”

He mentions that Hillary started it, which forces the media to also mention it as they fact check his claims. But even after they run their fact checks, they still have to mention Hillary, which is all anyone will remember. Not the fact check.

Please do not ever change, mainstream media.

I feel bad for the Democrat activists posing as reporters. They did their best to cover up the news and Trump ‘tricked’ them into reporting it anyway. Bummer.

Lmao, he Tai Chi’d them. The MSM followed Hillary’s lead about the birthers to get the spotlight off of her. Trump just took their anger and spun it back onto Hillary. The truth will always hurt Hillary and forcing the MSM to focus on the truth is going to kill her.

Now, in all seriousness who gives a f–k what the media thinks!

what Trump did to the MFM is just “deplorable”…

i’m ROTFLMFAO at this

I’m loving listening to the media talk about what a non-issue Obama’s birth certificate was, despite the murky lengths Obama went to keep it out of sight. He still won’t release his college records.

– but Ted Cruz and John McCain were issues…..

I hate to say it, but he’s living rent free in their heads as well as in Sir Edmund Cankles’.

I like to call her Madam fallsalot hat tip to Ace …. 😀

They wanted it to be about something they could turn-around and bash him with, prayed that he’d serve himself up again, and got EXACTLY what HE promised.

Don’t you love all the “outraged” people Clinton’s team had prepped for the cameras? They’re all outraged he said he doesn’t consider it an issue. It’s obvious Clinton’s campaign was all prepped to beat the cookie racism horse all weekend – now what do they do? Somehow I don’t believe that the very well prepped talking heads are willing to give up the story they had planned.

Trump uses the stupid media like a rented mule!

And now they did not get what they want so starts
all the different tantrums.

Yea media you got “Trumped” again! And I love it!
If you want a laugh turn on one of the cable channels.
Total melt down……

I am so done with the main street media. Flick you!

Hillary has managed to exceed expectations.

She is ending the week worse off than when she started.

Your comment reminds me of a Madeline L’Engle quote. She was asked if the movie version of “A Wrinkle in Time” lived up to her expectations. She replied “Yes. I expected it to be terrible and it was.”

And the week isn’t over.

Apparently in the eyes of the biased media the only MAJOR issue Trump could speak about is WHERE Obama was born.

“That was probably the lowest point of this campaign so far. I’m truly disgusted.”
— @politicalwire

Not quite as epic as Schwarzkopf thanking the media for spreading disinformation to Saddam, but close. Very close.

Do they really need to be tricked? More like hypnotizing chickens.

I almost missed one important part of his tweet while laughing at the exploding heads.

“I am now going to the brand new Trump International, Hotel D.C. for a major statement.”

HE got free advertisement for his new hotel, how many retweets of that statement are flying around now? We should make Trump International, Hotel D.C trend like crazy.

Something about lefty whine is music to my ears. How I’ve missed it. They were beside themselves in their fury!

This was one of the most beautifully played campaign moments I’ve seen in a long time.

Trump baited a hook and landed himself some free air time, not to mention he made the MSM look like a bunch of chumps in the process. Well played Donald, well played.

He did say it was a press conference, which it wasn’t.

Still, it is a shame that our national press has to be tricked into covering veterans.

His words were “major statement” – I’d consider Veterans Issues on Rememberance Day to be a big deal – sucks to be the MSM.

Wah, the masters of manipulation got manipulated by Trump. And they don’t like it one bit!! They’ve got to at least appreciate the irony.

It is hilarious to see Trump just drive the msm nuts.
I’m actually hoping he wins, maybe the msm will move to Canada or Australia as a protest.

I’m actually hoping he wins, maybe the msm will move to Canada or Australia as a protest.

What have those countries ever done to you?

I still despise the orange barker, but I must admit that this was sweeeeeeet! 🙂

The apoplexy of the MSM is hilarious to watch. They were gunning for raw meat and got nothing but gristle.