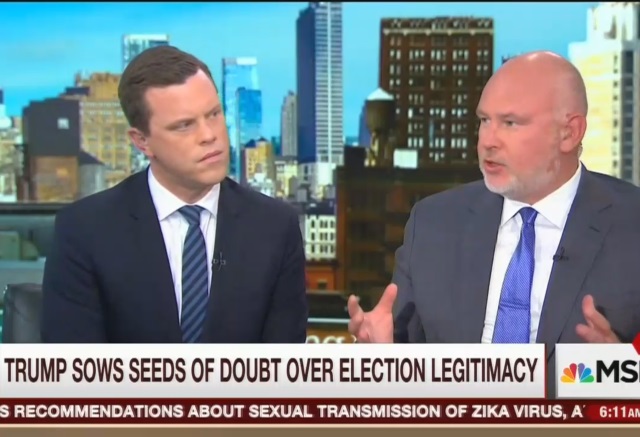 On today’s Morning Joe, Mika Brzezinski teased an upcoming segment with James Carville and Steve Schmidt by saying it would be a “debate.” But the only contest between the two was to see who could be more critical of Donald Trump. And Schmidt, senior adviser to John McCain’s 2008 presidential campaign, won that contest hands down.

Schmidt actually said that the “peaceful transition of power” would be “in doubt” if Donald Trump loses, suggesting he might refuse to concede and rouse his supporters by claiming the election was rigged.

Schmidt described Trump’s appeal to his base as being “toxic for democracy.” But when it comes to poisonous statements, it’s hard to top Schmidt himself, by suggesting that Trump might throw the country into crisis by refusing to recognize the election results.

MIKE BARNICLE: This theme, though, which Steve raised, it’s been raised elsewhere as well: illegitimacy. It’s an illegitimate election. It’s a rigged election. Donald Trump has a core constituency that’s not going anywhere. It’s going to stick with him and believe in him and what he says no matter what. This does not bode well for the future of the republic that this is going to be out there for years to come. The illegitimacy, the rigged election, the emasculated presidency.

STEVE SCHMIDT: I mean, to your point, this is incredibly toxic for a democracy. The first person who addresses the Victor in a presidential election that matters, right, isn’t the staff. It’s the opponent. It was John McCain calling Barack Obama. Very difficult moment. I’ve been on both sides of this. The Bush campaign and the McCain campaign. But making that concession call, that kicks off the process of the peaceful transition of power. The loser grants legitimacy to the winner through the concession speech and initiates–

JAMES CARVILLE: Al Gore, if one guy could have taken his army and gone in the woods and conducted guerilla warfare, it would have been Al Gore —

SCHMIDT: That process that culminates with the inauguration, it begins with that concession call. I think all of that’s in doubt in this campaign.

I don’t see Trump giving a concession speech either, but that doesn’t mean that peaceful transition of power is in doubt. His AltRight bois are most suitable for tweeting up a storm… Maybe knifing a few anarchists.

I am sure that he would not be happy to lose. But I cannot believe he would be a worse Sore Loser than Al Gore and his hanging chads.

Another baseless accusation from someone who never even heard the term “alt-right” until her preferred candidate went on a lying racist rampage.

If you combined the worse features of Daddy Warbucks and Lena Dunham you would get Steve Schmidt.

What a joke. I guess the rhetorical base exists… But I was kind of imagining the left if he won. I can imagine the Senate Dems totally totally losing their minds. The media sabatage would be epic. I’m not sure how that would go

I think it would be worse than that. The Leftists would resort to violence.

What a dumb *hit!

I think Bob Owens spells it out! It’s the crazy left that will melt down when Crooked Hillary lose in Nov.

Seriously. Conservatives own 200+ million guns, 12 trillion rounds of ammo. If we were violent, you’d know it.

Except lefties are the ones who always riot, not conservatives, dope!

“it’s hard to top Schmidt himself, by suggesting that Trump might throw the country into crisis by refusing to recognize the election results.”

Going from past experience this election, a loss by Trump by a margin larger than Indecision 2000 would be greeted by those in power with the fastest transition imaginable, with keys being handed over, drapes being measured, and nominees/contributors lining up for their new positions in DC the very next day.

A *victory* by Trump by narrow margins is where the violence would hit. The Democrats who support Hillary and Bernie do not suffer defeat well, and if they think they can riot and burn their way to a few thousand votes moved in a recount, they will.

Al Gore (to his credit) limited his month-long tantrum to legal (and quasi-legal) maneuvers designed to allow the loyal Democrats in various counting spots to quietly poke a few more holes in the punch cards here and invalidate a few military votes there until the numbers went in his direction. Thankfully, he failed.

Has to be fast while Hillary is still breathing. Might be time for us to brush up on the 25th Amendment. Just in case.

The worst thing about Trump is that he’s a fear monger. Always waving threats of dire consequences if Hillary wins.

Well we are one Supreme Court Justice away from losing religious freedom as we know it. Two Justices away from gun confiscation.

Trump can deliver both.

Are you not aware of the dire threats if Hillary is elected?

Any potential problem goes the other way. If Trump loses, there’s no transition; it’s D’rats before and D’rats after. If Trump wins, then there would be a transition. How difficult that would be is up the D’rats, not Trump.

Concessions are immaterial. The election is determined by votes, not concessions. Nor is there a question of illegitimacy. Of course the election will be rigged; I fully expect the D’rats to pull out the stops this time. That doesn’t mean they’ll win, but they’ll certainly try; stuffed ballot boxes, voter intimidation, hacked Dibold machines, polling places closing early or late to the benefit of one party, bogus MSN calls on results to suppress late turnout, and ringers among the electors. That won’t make any difference; rigged or not, it’s the only election we have. There’s nothing in the wind like the election of 1876, when the electoral votes of several states were thrown out due to voting irregularites too gross to be ignored.

After the election, sabotage of the apparatus of government is certainly possible. We saw it on a small scale when the D’rats of the Bill C. administration vacated the White House. I’d expect them to have bigger plans this time.

But there’s little chance of any real problem. Obama doesn’t control legions of troops loyal to his person. Neither does Hillary. Trump, well, no need to go there; it takes more than one army to make a war. Bernie’s army is pretty much back in barracks and out of the picture.

History sometimes repeats, but this time around we’re not seeing anything like a rerun of Cæsar, Pompey, and Crassus fighting over the carcass of the Republic.

If Hillary wins I can see a Romanov or Ceausescu ending in a 2-3 year period.

Bakers have to make gay wedding cakes, but they can refuse to make cakes with Trump 2016 on them.

Political affiliation is not a protected class under the civil rights laws. Sexual orientation is, in many states.

Another of the so called conservatives speaks.
These people are a joke and the real threat to liberty.

Do they think Hillary would concede without a fight? And Obama would facilitate a transition?

I think, when Trump wins, you’ll find a ton of juvenile sabotages to the transition progress, and probably vandalism to the White House itself.

If Trump loses there will be no transition of power.

Yeah, this is the same Schmidt-head who knifed Palin in the back.

I would be more concerned with Obama refusing to turn over power. BTW, I would pay on pay for view for Sarah Palin to kick Schmidts rear end.

I am not a Trump cultist, but I was royally sick of the McCain Establishment years before I voted for him. This just emphasizes why. McCain’s bravery may be notable, but so is his backstabbing nature, ingratitude, and dishonesty.

When they tanked the 2008 Election against Obama they tried to lay the blame on Palin in spite of the fact that she was probably the only thing that made it remotely competitive.

Now we have the same thing here. What about if Clinton wins?

She has no legal ability to hold the Presidency, and she is in the thrall of God Only Knows What. Is anybody going to do that?

To be honest I’d almost welcome Trump refusing to concede, because it would show somebody willing to NOT give in and to fight what is a horribly illegal usurpation of the Republic’s government.