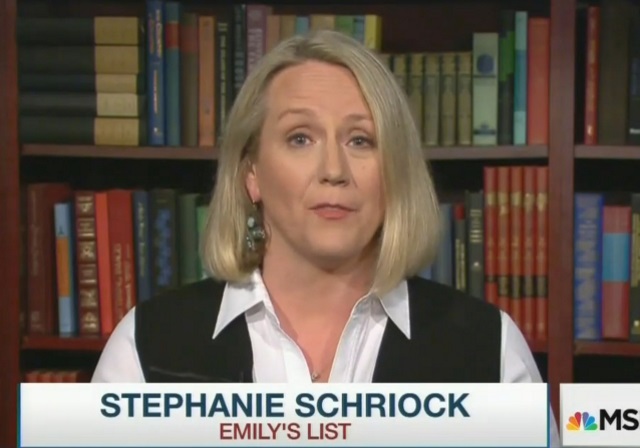 This Insurrectionist regularly monitors Chris Matthews’ Hardball show. And while there’s little doubt that come November 8th Matthews will pull the lever for Hillary, he has given Donald Trump a fairer shake than other MSNBC hosts. I chalk it up to Matthews’ regular-guy upbringing. Factoid: Matthews did a short stint as a Capitol Hill police officer.

A striking example of Matthews’ relative fairness came tonight. After airing a clip of Trump criticizing the police shooting of an African-American man in Tulsa, OK, Matthews repeatedly pressed Hillary surrogate Stephanie Schriock, the president of the pro-abortion rights EMILY’s List, to agree that Trump was “right in saying that.” She clumsily dodged and weaved, but under persistent questioning by Matthews, Schriock eventually conceded “yes, I think so.” Said a satisfied Matthews: “that’s all I’m asking.”

We don’t have all the facts about the Tulsa shooting.  We don’t know whether Trump’s criticism of it was well-founded.  But Matthews clearly thought Trump was right, and it was notable to watch Matthews press a Hillary fan to acknowledge that.

CHRIS MATTHEWS: Well for his part, Donald Trump focused on the shooting in Tulsa which he said he was troubled by. Let’s watch.

DONALD TRUMP: I must tell you I watched the shooting in particular, in Tulsa. and that man was hands-up, that man went to the car hands up. Put his hand on the car. I mean, to me it looked like he did everything you’re supposed to do and he looked like a really good man. This young officer, I don’t know what she was thinking, I don’t know what she was thinking. But I’m very, very troubled by that. Did she get scared? Was she choking? What happened? But maybe people like that, people that choke, people that do that, maybe they can’t be doing what they’re doing. Okay? They can’t be doing what they’re doing. So we all respect our police greatly. And they will just to have get better and better and better.

MATTHEWS: Stephanie, weren’t you impressed to hear what Donald Trump said today? Saying, I thought that might have been a suspect using that legal, that police term. That guy had his hands in the air. He was doing what he apparently was ordered to do by the police officer and he still got shot and killed. Was Trump right in saying that?

MATTHEWS: Was Trump right in saying that?

MATTHEWS: Was Trump right in saying that?

Oh, wait. It’s not about the children.

Talking points are wonderful things to focus the media and the public’s attention on things you want focused on, but only if the press allows it. Matthews has got game. Occasionally.

I am not going to give Matthews any slack until he has that thrill going up his leg surgically removed.

No matter how wrong Hillary is about anything, Trump was wrong about Tulsa.

Crutcher was non-compliant, and so what if he had his hands up BEFORE the shooting? Once a black man has his hands up, does that means he’s forever innocent, even after he puts them back down? And he didn’t put his hands ON the car, he put his hands IN the car.

Trumps words seem much more measured compared to HRC’s incitement of a community that means more to her as a voting block than their safety.

I remember back in the 2008 campaign, the U.S. Senate hopeful Kirk Watson was asked by Mathews to name one single accomplishment of Hillary Clinton during her time as Senator. Watson, a former Austin mayor and a real sleaze could not come up with an answer thus ending his national political career though he remains a state senator.

Politicians need to keep their uninformed opinion’s to themselves.
Once again we have the Hands Up *ull*hit! When the guy was shot his hands were not UP! Stop spreading lies.

People need to give time for the investigation to be completed and the district attorney to review the case.

This is a prime example of what can happen when you don’t comply with officer’s directions. This would not have happened had direction been followed. Why do people disregard the police this way?

And no I am not saying is allowable for the police to shoot you because you don’t follow commands. But that decision start a chain of events down a very dangerous road!

The point is that Trump spoke stupidly (again) and Matthews capitalized on it, thus furthering the BLM agenda.

Trump will not do well in the debates if he can’t see a trap before it’s been sprung.

Part of the problem is high officials currying favor with the mob before all the facts are in and that only feeds the fictional anti law and order narrative.

If a leftist like Matthews says something that is true, it was because he was told to do so or had permission from the Central Committee. There is a larger agenda in play here. What is it?

I think Trump’s words were exactly right and he said he was “Troubled” by the results. In a follow-up article, it appears that this kind and gentle PCP user was reaching one hand into his car when the cop shot him. It is never as the press first reports it. Trump could have made a fool of himself if he had just blamed the cop like the left does reactively but he didn’t. I think he said what a lot of us feel and have doubts about.

FWIW, I have noticed over the past couple of weeks that the Houston Chronicle is more equitable in their political reporting than they have been over the past 20 years. They have a ways to go, but it is better lately. True, their editorial page is still the daily Progressive talking points, but the political stories that they choose to publish have even had nice things to say about Donald Trump.

Baby steps, to be sure, and there is no guarantee that this will last. But with an ever-declining readership, they have to do something to stay afloat. Perhaps they have finally figured out that it is not recommended to print how much they actively despise 1/3 of their potential readership.

Trump is running off at the mouth without knowing the facts, compounded with a lack understanding of police protocols, and doubled down with bloviations about “choking” that we have heard before.

This is all consistent with the M.O. of Matthews’ objet d’amour, so of course he’s on board. The Hillary surrogate has just had her whole schtick arrogated, so not surprisingly she’s at a loss for words, i.e. “choking”. She wouldn’t make Trump’s first cut.

So Trump gets an A for keeping a leftist quiet for a moment or two, but with respect to prudence, wisdom, leadership, or acting presidential – a big fat F.

Somebody else gets it. Thank you, Jesus.

Mark, not to put too fine a point on it, but you’re dumber than a bag of hammers if you think Matthews’ intent was to give Trump a fair shake by pressing the Hillary mouthpiece into agreeing that Trump was right. LOOK at what Trump said with regard to Crutcher having his hands up when shot. He did NOT have his hands up when the officer fired. What Matthews was doing was furthering the BLM “Hands up, don’t shoot” BS because Trump, as usual, shot his big, blowhard mouth off about something he knows nothing about and was simply looking for black street cred as part of his pie-in-the-sky idea that blacks will vote for him.

Trump is wrong and is just pandering again about something he knows nothing about. Matthews was just pushing the phony BLM narrative that Trump was dumb enough to agree with.

Do you see what Matthews did there?

You need to quit watching MSNBC. You really do.

They edited out the part in the beginning where he praises police in general, as usual. But, he caved to immediate pressure here. He’s not a politician. There is a curve.