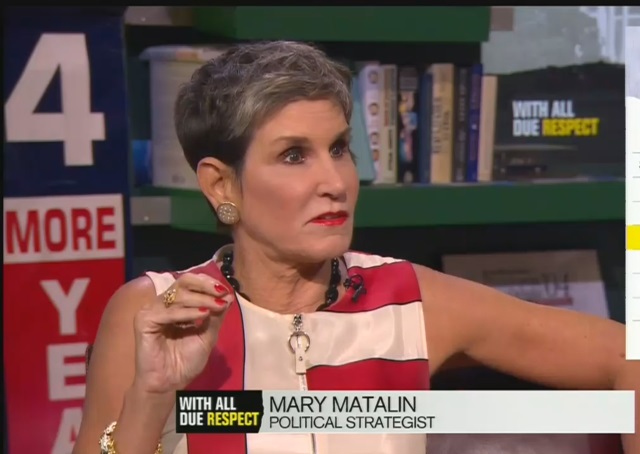 Wow! Veteran political strategist Mary Matalin is not just “confident” that Donald Trump is going to win, she thinks he has an 85-90% chance of winning. And even that is conservative compared to the 100% chance she originally claimed during her appearance on today’s With All Due Respect.

Note that Matalin is not a rabid Trump partisan. To the contrary, she quit the Republican party in May, and says that rather than having a dog in the race, she has, in Trump, merely a “mini-puppy.” Matalin took an amusing shot at her husband, Dem strategist James Carville. When John Heilemann said he could only imagine the fights she was having with him, Mary mockingly answered “who? Who? Is he my . . . go-to guy in politics? I don’t think so.”

MARK HALPERIN: We talk about the Quinnipiac polls showin Trump within striking distance in the four states he needs to win to get to 270 probably. Just your general handicapping of the race now: does Trump have a 20% chance of winning, 25%, 15%?

MATALIN: I’m confident he’s going to win. The race is closing, despite Mrs. Clinton’s dumping hundreds of millions of dollars, relative to his $4 million or whatever.

HALPERIN: You think Hillary Clinton has a 0% chance of winning?

MATALIN: All right, let’s say 10%, 15%. I just think he’s going to win! The closing of the races, the turnout that y’all mentioned, whether or not he has a turnout operation as you mentioned, the RNC does, and those Senate race races particularly in those states are turning out every cell under every rock. Ohio, very important, Portman’s back up. Toomey will have a good operation. North Carolina, he’s up. So he’s coming back in the right places, he’s in the margin of error in about 10 of these states. Between the RNC and the Senate races and the down-ballot races pushing out, people are nervous about the House now–they don’t need to be. That will be his turn-out operation.

HALPERIN: I guess we just spend the rest of the time asking about the Trump cabinet.

JOHN HALPERIN: Really, no kidding: by a 90% chance of winning.

MATALIN: I don’t, as you know, I have a mini-puppy in this race. He’s not really my guy, I’m intending to vote for him. He’s not a conservative, he’s not a Republican, but he’s most importantly not a Progressive. What he is, is that he has an action for bias [sic: presumably ‘bias for action.’] And what conservatives and the Republicans have been, is James 2:17, they’ve been faith with no action. So that’s dead. He’s a man of action I guess.

MATALIN: She has a turn-out operation as we just discussed. The mechanics for one aren’t at RNC level. But she does not have something he has that’s critical, more critical than an operation, and that’s enthusiasm. So yes, all right, I’ll say Pennsylvania then. Yes, he has to win Pennsylvania. New Mexico, Nevada, Iowa.

HALPERIN: You think is going to win New Mexico?

MATALIN: I think he’s going to win states like that where he is within the margin of error currently in not just outlier polls, but these polls too.

HEILMANN: I just can’t imagine the kind of fights you’re getting in with your husband these days.

MATALIN: Who? Who? Do you think I — is he my dispositive, go-to guy in politics? I don’t think so.

Interesting. Thanks for posting the vid.

Halperin wouldn’t let her say that. As the transcript supra accurately shows, he even interrupted her mid-sentence to tell her so. So she said 85-90% just to shut him up. But she said, and apparently meant, 100%.

Which is effectively what the people who’ve been predicting for months that it’ll be Yuuuugge have been saying.

The big wild card this election won’t be the votes, it will be the fraud. I’m expecting levels of voter fraud we haven’t seen in America since the 1870s. And that’s a problem; if we’ve learned anything the last few months, it’s that if the Clinton camp commits a crime, they’ll get away with it.

It’s true what they say. The longer a husband and wife are together the more they start looking like each other.

Well, Matalin has always been a favorite of mine and she’s held up pretty well over the years. Nice gams in that dress. She looked like Betsy Ross draped in Old Glory.

I don’t care what anyone says. There’s something oddly likeable about Serpenthead.

I think he is going to win … I do not like him .. I do not trust him
to do what he said he is going to do … but like a battered wife
I am gonna vote for him because Hillary is 1000x worse.
so no matter who wins .. conservatives are screwed …
now hopefully this may kill the GOP and conservatives
can salvage something ..

Dunno. Shrillary Shroooooo has the populous states sewn up, sealed, and delivered, and is likely to win in Ohio, Pennsylvania, Florida, and possible North Carolina. It doesn’t make me happy to say this, for I think Shrill is the clearly worse candidate: corrupt, proven inept as SecState, morally degraded in her support of late-term abortion, and doesn’t think that people on the other side should enjoy First Amendment Rights. But she is ahead on all counts.

Further, Matalin says nothing of how Trump would win. She has given only a sound-bite devoid of anything substantive.