Attraction deemed insensitive to people who care about mental health. 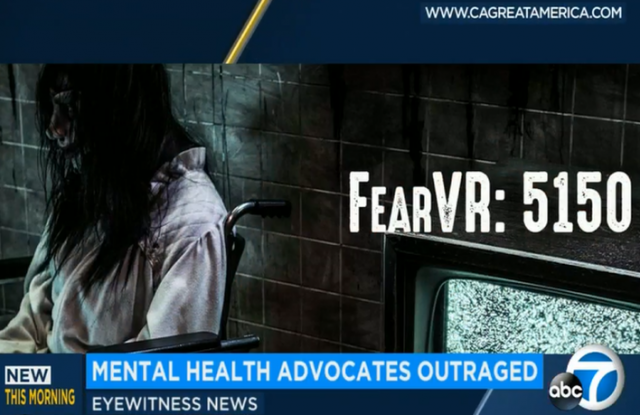 As if the election season isn’t scary enough, the start of October a few days away and Halloween-themed everything can be seen everywhere.

In Southern California, Knotts Berry Farm pulls out all the stops in making its amusement park the scariest place on earth. However, according to some mental health advocates, the newest attraction was too much.

A popular Halloween attraction at Knott’s Berry Farm and California’s Great America was shutting down, officials announced Wednesday, after some took to social media calling the display “offensive” to those suffering from mental illness.

The virtual reality attraction, which essentially focuses on a story line about a possessed patient running wild in a hospital, consists of strapping parkgoers into a chair before they are given VR goggles. If the game becomes too intense for them, customers can press the “panic button.”

The attraction was called FearVR: 5150 (the numbers referring to the California Welfare and Institutions code for psychiatric commitment). Ron Thomas, who lost his mentally ill son when he was beaten by Fullerton police officers, went to see the attraction for himself.

I couldn’t get in,” Thomas said. “There were so many people waiting to get in.”

Instead, he talked to people as they exited and asked them to describe FearVR. They told him they were strapped into seats as if being admitted to a hospital, and then were transported into a frightening scene of mayhem.

“Virtual reality-wise you’re led to believe you’re in some kind of institution,” Thomas said, and a patient “is on the loose … and she’s coming for you.”

…The whole thing sounded wildly inappropriate to Thomas, whose son was in and out of mental facilities in his years-long struggle with schizophrenia.

However, not all of Knotts Berry’s patrons are happy with this decision.

How politically correct are we as a society, that now @Knotts had to cancel its FearVR 5150 Halloween attraction. SMH

Dealing with mental illness is a challenge, no doubt. However, the park did not open up this attraction to mock, abuse, or diminish those who suffer for psychiatric disorders. It was opened to entertain visitors with images of horror and terror, as appropriate to the Halloween season and the park’s history of extravagance at this time of year.

Those who didn’t want to see this attraction weren’t being forced to do so. However, now others who might have enjoyed this experience, simply because they liked the scare, don’t get to because of activists and advocates.

That, I think, is the most chilling part of this story.

The PC whiners aren’t the ones who put the kibosh on things: it’s the people who allow themselves to be stampeded by the silliest of complaints.

“Nothing is impossible to the man who doesn’t have to do it.”

And there are always many ready to denounce, with righteous indignation, others’ refusal to sacrifice for their preferences. But company officers have no such luxury. By law, they must not risk stockholder equity by indulging their own sense of right and wrong.

It is impossible to know at the start of these PC protests how big and damaging the story might become; hence the strong and sensible prejudice on the part of those with fiduciary responsibility to stop the bad publicity ASAP. If I were a stockholder, I would appreciate their efforts.

The companies affected by PC protests are the victims. Blaming them for caving in is perverse, when it is we as a society who have created – or allowed the creation of – the situation where such nonsense can damage an honest business.

And stop with all the sissyboy apologizing. (bad word)’em.

To me, this is just another example of how the loud minority controls what happens in this country. Whoever “protests” the loudest, wins. I just hope that normal people get sick and tired of these SJWs before this country is beyond repair. Obviously, Knott’s Berry Farm blinked here, but not all companies are so easily controlled.

Next, the global abortion industry. Advocates for science and human rights are outraged by the progressive liberals’ twilight fantasies and final solution, respectively. After committing the first million abortions, the rites were the definition of insanity.

My first wife was diagnosed with paranoid schizophrenia after the birth of our second child. After 3 years of multiple hospitalizations she took her own life. Every day I ask my self what else I could have done to protect her, but in reality there was nothing.

This is my burden to bear, no one else’s.

Would I go see this type of attraction? No. Am I offended by it? No.

Everyone has something they can be offended by, large or small. Life is much to short to be perpetually offended.

It was opened to entertain visitors with images of horror and terror, as appropriate to the Halloween season and the park’s history of extravagance at this time of year.

If they want horror and terror, maybe next year they can do one based on Kermit Gosnell’s abortion clinic from hell.

I wonder what PP would think about that?

No one would go to see that unless they built it in the Bible Belt.

If it offends you, don’t go.

Personally, I find modern day progressives highly offensive but I doubt they’re going to go away simply because of my personal feelings.

This is off the main topic but is in the article.

Ron Thomas, who lost his mentally ill son when he was beaten by a 37-year-old by Fullerton police officers…

This is an odd sentence. What does it mean? Thank you.

Publicity for his law suit? Overly touchy? Wanting to make trouble for the world since his son was killed?

Thanks; I’ll give it a look.

Shut down a popular haunted house?

I’ve seen many horror movies where the killer is a “escaped mental patient,” but in none of them were the other patients depicted as dangerous or evil. If anything, they were often victims of the killer – who must be unusual to be scary.

It’s BS, of course. Unfortunately, businesses are beholden to public good will and no corporate officer worth his salt is going to risk his company’s longer-term business reputation over a single product, however popular. The failure here is not the park’s, but society’s for allowing minor sensitivities to become public issues.

I blame the media for covering this story.

Let me inject a little paranoia and conspiracy theory here …

Could it be that it really had to be shut down because it resembles too closely the inner workings of Washington D.C.?

This attraction was not about the mental health business. Were the little snowflakes in Kalifornia traumatized? Poor babies.

Oh my gosh it’s for Halloween! A time that some people love to be frightened. People who did not even go through Haunted House want it shut down.

This is the new standard from the snowflake society.
If I am offend in any way you must be sensitive to me.
Regardless if the request is reasonable or not. I am offend!
SHUT IT DOWN!

Is it still okay to listen to Patsy Cline records?

The founder of Knott’s Berry Farm, Walter Knott, is turning in his grave. Mr. Knott was an avid proponent of American History and values.

There is also a scale replica of the Liberty Bell, crack and all.

As per Mr. Knott’s wishes, admission is free.