Deplorables ‘Much Ado About Nothing’ 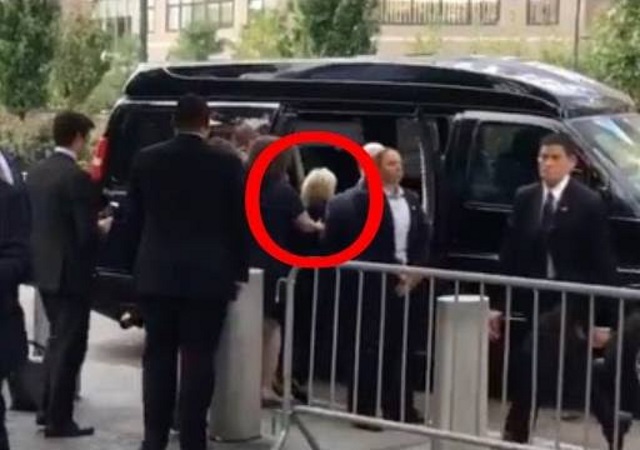 Let’s say it simply: Joe Scarborough has become a shameless pro-Hillary shill. On the big issues of the day: Hillary’s health collapse and her “basket of deplorables,” Clinton campaign manager Robby Mook himself could not have spun things for Clinton more audaciously than did Scarborough on today’s Morning Joe.

On Hillary’s collapse, Scarborough played the happens-to-everyone card, saying that he often has to grab the handrail walking down the stairs and feels faint during every performance with his rock group. As for Hillary heaving half of Trump supporters in a “basket of deplorables,” Scarborough first tried to prove Hillary right with some poll numbers, then dismissed the issue as “much ado about nothing.”

Scarborough might have his reasons to be angry at Trump, who has threatened to out Joe’s relationship with co-host Mika Brzezinski. But for Scarborough to permit his personal sentiments to so blatantly affect his public statements is lamentable.

JOE SCARBOROUGH: Video doesn’t look good, but I’ll you what. I wake up at four o’clock in the morning every day. I’ve been doing it for a decade. There are a lot times we work till ten, eleven o’clock at night. There’s some times when I’m walking down stairs and, you know, very active guy, I have to stop for a second and grab a handrail . . .  So to take this moment and say “oh, it proves that she’s unfit to be President of the United States.” It’s just, I’m sorry. It’s stupid.

I will tell you, you know, you’ve seen me — I do Prohibition [the Upper West Side spot where he performs with his band.] And I am up there playing and sweating and everything. And like once a show, cause I’ve been up since 4:00. It’s like ten o’clock at night. I’m on stage. I got to close my eyes, stop and I say to myself: lean back on your heels so if you pass out you will fall into the drums.

MIKA BRZEZINSKI: And what’s the difference with Donald Trump? He doesn’t actually do work behind the scenes.

MIKA: Let’s go through what happened.

JOE: [regarding Hillary’s “basket of deplorables” statement] I’ve got to say, at the end of the day —

JOE: — this is much to do about nothing. I mean, everybody’s going to, the Trump campaign thinks this is huge. People are going to be hyperventilating about it a lot. We won’t be talking about it next week. Nobody will remember.

The irresistible urge to deny, even when the denial is counterproductive.

Didn’t the Left used to say the cover-up is worse than the crime?

The old, “it could happen to anybody” defense. In fact, it only happened to one.

Everytime I come down with bacterial pneumonia – I spend the afternoon playing with my infant grandchildren. Doesn’t everybody?

The whole “Nuthin’ to see here, folks,” routine is absurd.

Baghdad Bob had nothing on Joe Scarborough. Thanks for the report. I have no wish to contribute to this dishonest network’s ratings, although I do want to know what misinformation they are pushing.

Well I’m sure they all felt faint yesterday morning.

You have to understand that Joe has nowhere else to go–after MSNBC it’s either be homeless or be a washroom attendant at some swanky DC hotel.
Whatever his lords and masters tell him his position is, that is his position.

Bent over and light headed is probably his favorite position.

I am steadily amazed at the volume of free press and notoriety that MSNBC morning show gets. It gets fair viewership given when it airs. But the last time I saw an analysis of the numbers, something like 85% of its viewership is within the DC and NYC markets. So it’s sort of a show of the professional pundits (elites?) talking to themselves with the same population listening. Within NYC you could probably add a few more dedicated progressives to the mix.

But the only way it could possibly have influence on the general electorate is through all of this free publicity. Odd.

“it’s sort of a show of the professional pundits (elites?) talking to themselves.”

Agreed, and that’s one reason that I believe it’s useful to follow and report on it. Morning Joe has a strong viewership among opinion makers. We might, and don’t, like it, but it’s important to know what they are thinking and how they’re trying to shape the news.

I don’t give the pundit class as much credit as you do. 15 years ago, they mattered to a degree. With technology (internet), they matter a whole lot less.

One of the biggest eye openers for me has been how even some of the most progressive public figures – pundit class, entertainers, elected class, etc. – are now routinely castigated by the very monsters they created. So the epicenter of “opinion makers” as it pertains to the progressive left has shifted away from the DC elites. They are talking as much to themselves now as to the public. Some may say it is now more democratic, but I’m not so sure. The hard left is well funded so the “opinion makers” in the public are not as organic as they seem.

The AltLeft has run the Democrat Party since at least 2006

Time is the enemy of their BS. This is not the sniffles, more like a mortal wound, but there preferred approach is to whistle past the graveyard. Everybody has their lesion, hers are conceit, and greed. Shakespeare has probably already done this to death.

let me try once more —
1 – i don’t want ‘chow Scarborough’ for POTUS either,
what a tool and fool

I wonder of Bill or Hillary got Joe his NBC gig?

This is actually bigger than that (and this may have been discussed in the prior thread, but I may have missed it.

Look at her FEET. She’s not “collapsing” into the vehicle. She’s not moving on her own power AT ALL. She’s being CARRIED the second she leaves that concrete pole (and before she moves, it appears that the female aid standing next to her is holding her up from falling over the pole backward.

Well, I guess that settles it. I will not be able to vote for Morning Joe for president. His health is too shaky.

Joe, if you feel faint every time you perform with your rock group then you either need to practice more or see your doctor probably both.

Hillary is as healthy as a horse ::: Barbaro