Are minorities left out to dry in the battle for increased educational opportunity? 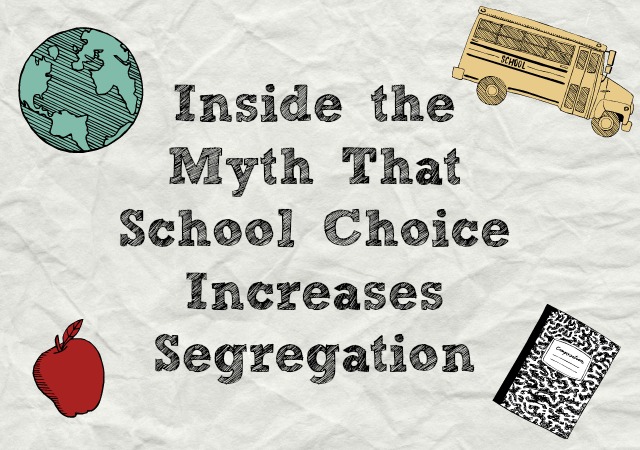 On the educational choice battle field is a fight over whether school voucher programs, charter schools, or generically speaking — school choice, increases instances of racial segregation.

There are studies in abundance examining this issue, most of which fail to consider crucial variables. Studies that conclude choice increases segregation make the simple mistake of assuming that because a white family chooses a predominantly white school, regardless of the reason why they chose the school, that their selection was based either entirely or at least in large part on race. Their solution is not the free-market derivative of their pro-school choice counterparts, but a theoretical one impossible to enact — let everyone go to the best schools.

One of the most comprehensive studies on the matter was conducted by The Brookings Institute. Matthew M. Chingos found the data simply does not support the “charter schools push segregation” mantra. Examining a multitude of variables, Chingos wrote:

A naïve examination of the relationship between this measure of (de)segregation and the percentage of students enrolled in charter schools appears to show that the critics are right: more choice is associated with minority students attending less diverse schools. For the 2010-11 school year, a 10-percentage-point increase in charter enrollment is associated with a decline of 16 percentage points in minority students’ exposure to non-minority students. A similar but weaker relationship exists along class lines (as measured by free lunch eligibility).

Of course, this relationship ignores the fact that charters tend to locate in areas that serve large shares of disadvantaged students and members of minority groups. As a result, this simple correlation tells us nothing about whether charters increase segregation or just tend to locate in areas where the schools are already segregated. This is the same methodological flaw that compromised the findings of the UCLA study.

A better approach to the question of whether choice increases segregation is to look at changes over time. Did areas that saw large increases in choice experience larger increases in segregation than areas that saw smaller increases in choice? This kind of analysis does not conclusively measure the causal effect of choice on segregation, but by examining the same locales over time it represents a clear improvement over the cruder approach of comparing different locales at the same point in time. For example, it takes into account any unmeasured factors, such as the degree of residential segregation, to the extent that those factors remain constant over time.

…the results consistently indicated no meaningful relationship between choice and segregation.

The lack of any consistent relationship between charter enrollment and segregation does not eliminate the possibility that such a relationship exists, but suggests that it is unlikely. For there to be a relationship, it would have to be the case that counties where charter enrollment increased experienced an increase in segregation as a result but then adopted policies (or experienced other changes) that counteracted the increase in segregation. In my view, that is not a very plausible explanation for these results.

As Chingos mentions, the vast variety of school choice programs means there are programs that result in increased integration while poorly written legislation may inadvertently push segregation. Even so, the latter is the exception and not the rule, as the data indicates.

No one in the business of choice advocacy promotes segregation. In fact, the goal is expanded access to top-notch education for students who would otherwise find themselves geographically or economically prohibited.

Yeppo. Markets work, and markets ONLY thrive where competition is allowed…or even fostered.

Give people a competitive challenge, and they will surprise you with how well they perform.

Put them in a state-run monopoly, and they’ll fall to your lowest expectations.

Even the crappy schools would benefit by open competition.

Ah, yes, but there’s the rub. Open competition would necessitate that someone in the crappy school actually take personal responsibility for what goes on in his or her classroom. My gracious, we can’t possibly have that…..(/snark)

Anything which allows choice will increase segregation. That’s what segregation means; selection and subsequent separation or isolation. Populations (or sets of any type) are sorted on the basis of some discernable quality about which rational (even if poor) choices can be made.

The only way to mix up populations (or sets) is to forbid such rational choices, and impose choices based on other, and generally irrelevant, criteria. When carried to an extreme, this can give you an unsorted—i.e., diverse—population.

Destroying or at least inhibiting rational selection is the job government has allocated to itself.

This is just math, so of course it’s clear as mud; sorry.

Consider an artificial example. Postulate a school with a reputation as a hard one; gruelling courses of study, skull-crushing homework loads, nut-busting exams, and a high dropout rate, maybe even a depressing suicide rate. Postulate further that attendence is voluntary and self-selected; that is, students go there because they think they’re up to it and want an education, not because they happen to live in the area.

For this example, neglect issues involving travel, money, language, etc. We can even eliminate innate intelligence or talent as factors determining attendance; come one, come all, and let Darwin decide who graduates.

What is the population of this school going to look like? If undisturbed by other factors and allowed to sort itself out over time, it will fill up with students who grew up in cultures which admire intellectual dedication, persistent hard work, and value skills and knowledge. In other words, it will be mainly Jews, Chinese, and Scots.

This does not mean that there is no “diversity”; it means that the diversity at the school will not match the distribution one would expect from a census of the general population. But since divergence from that distribution is one of the major ways both “racism” and “sexism” are defined today, such a school would be denounced.

Showing, again, tom that you don’t have the first idea of markets.

Postulate a marketplace of schools, offering various levels of rigor, some (like yours) a rather draconian learning place of hyper-competitive regime, some more relaxed and still very effective. Perhaps MORE effective. But still much, much more effective than what we have at the best public schools.

Why, it might look like some of the better Catholic schools, which have tended to be pretty integrated in most cities.

Capitalism is the only system that has, is, and can work for the betterment of society no matter where you place it.
Leftist love Darwin when arguing with Christians but hate him when Capitalism supports Darwin theories of survival.
In Socialist America you are govt property and “ignorance is strength” (1984, George Orwell)

Class diversitists judge people by the “color of their skin”, not the content of their character (e.g. principles). It’s not a coincidence that class diversitists are predominantly members of the Pro-Choice Church along with abortionists in a “final solution”.

That said, people are conceived with an intrinsic bias, but it requires class diversity schemes to force a prejudice.

There is a liberal mindset that GOVERNMENT control trumps free choice. So folks think that the population is incapable of choosing in their best interest. Thus these self-proclaimed “experts” must impose their will upon those who they claim to benefit. This liberal mindset is what created Jim Crow laws in the first place.

Free markets are self-correcting. Government failure does not self correct but requires another intervention. Worse those in favor of government intervention often choose the wrong alternative and make the problem worse.