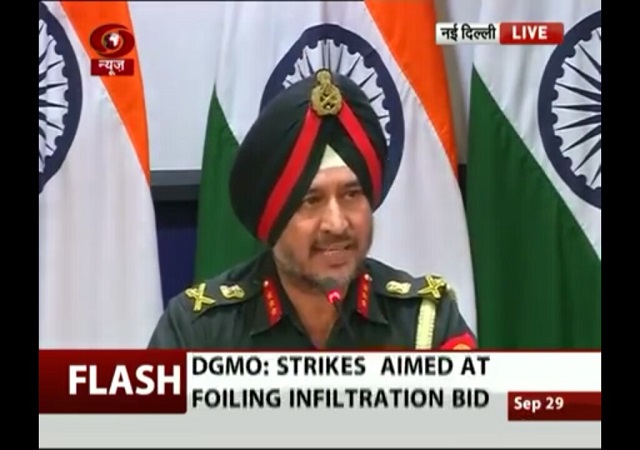 Last night, the Indian Army carried out a series of covert operations targeting Jihadi bases along its border with Pakistan. According to official Indian sources, the counter-terrorism strikes killed 38 Islamists as well as couple of soldiers of Pakistan’s regular army, who were overseeing these Jihadi bases. Indian Special Forces went 2-3 km inside Pakistan’s border destroying up to 6 Jihadi camps. No casualties were reported on the Indian side. The strikes come less than 2 weeks after Islamists attacked an Indian Army base in India’s Kashmir region, killing 18 soldiers.

India has faced a sustained terrorist campaign in its Muslim majority northern state of Kashmir since the 1990s. Terrorists have killed nearly 5,000 Indian civilians and over 2,000 Indian soldiers since 2001. Tonight’s cross-border operation, first of its kind conducted by India, shows the change in country’s military doctrine since Prime Minister Narendra Modi took office 2 years ago.

Following tonight’s strikes India has put its army along the international border with the Islamic Republic of Pakistan on high alert. Indian newspaper Times of India reports:

In the first such action, India carried out surgical strikes on seven terror launch pads across the Line of Control (LoC) with the Army saying on Thursday its special forces inflicted “significant casualties” on terrorists preparing to infiltrate from Pakistan-occupied Kashmir.

Defence sources said seven terror launch pads across the [border] were destroyed by special forces of the Indian Army on the intervening night of September 28 and 29 in a nearly five-hour-long operation during which heliborne and ground forces were deployed.

The sources said the launch pads in [Pakistan-occupied Kashmir] were in the range of 2 to 3km from the [border] and were under surveillance for over one week while Union minister Venkaiah Naidu said the strikes targeted 5-6 places across the LoC along Kupwara and Poonch in Jammu and Kashmir.

Indian Army’s operation against cross-border Jihadi fighters was met with general approval in Indian press and social media. On Twitter, an Indian journalist Partha Sinha called for Israel and India to join hands in combatting terrorism.

After the deadly attack on Indian military base two weeks ago, Israel had offered its expertise to secure Indian borders. An Indian newspaper reported last week:

In the wake of the Uri attack, Israel on Friday reiterated its offer of experience and expertise to secure India’s borders. (…)

[Ambassador of Israel to Indian] Carmon said both countries shared similar challenges in border management and that Israel has solutions for these, adding that the two countries can work together taking into account the capabilities of Israeli companies and government and adapting them to Indian needs. [Indian Express September 24, 2016]

In recent years, Israel has not only emerged at India’s preferred destination for military procurement, but also has served as an inspiration for a new defense strategy in face of rising Islamist terror threat. For decades, both Israel and India have been at the forefront of Jihadi onslaught to which the Western world has not fully woken up to.

One of the major failures of postwar US diplomacy was our failure to make India a staunch ally. This led to the establishment of the “Non-aligned Movement,” which effectively was a diplomatic victory for international communism and the USSR in particular, since much of the world’s population was essentially adopting a neutral stance. It prolonged the Cold War at a great cost in lives and the quality of life for the entire world.

Today’s Indian leadership and citizenry is more prepared to enter into close relations with the United States than any in history. An improved bilateral relationship would be a boon to both countries and a significant hedge and counterweight to both Russian and Chinese adventurism.

Unfortunately, we are apparently too stupid to take advantage of such an easy opportunity, as evidenced by the nomination by both our major parties of dishonest buffoons who are out only for themselves.

Add to that fact that India is a land of an Islamic holocaust in which two-thirds of the Hindu population disappeared during the years of Islamic occupation, and Israel has a true friend that understands their pain.

India has a legitimate historical reason to want to partner with the US and Israel to stop radical Islam.

I don’t know if it was two thirds, but the Muslim invaders killed between 50 to 80 million people between 1000AD to 1500AD. Prior to that, in what is now Afghanistan and then was comprised of a mix of Hindu principalities and kingdoms, the Muslims annihilated the entire population of the country.

Think about that. Not even the Mongols would have done that. They would have slaughtered an entire city, but for the encouragement of others. That was just to make their conquest faster; the next doomed city would not dare oppose them. The Romans operated under the same rules for the same reasons. The population of a city had rights only until the first battering ram head touched their city walls. Than they forfeited all rights, and the Romans conquest would be brutal. Like the Mongols, any city that would oppose the Romans had to factor that knowledge into their calculus.

But neither the Romans nor the Mongols would annihilate the entire population of a country. It defeated the purpose of conquering it as boneyards don’t generate revenue. But the Muslims did in what is now Afghanistan.

The mountains between Afghanistan and Pakistan (then India) were renamed the Hindu Kush by the Muslim conquerors. It means “Slaughter of the Hindus” in Persian. The reasons why are a little murky. It could be to commemorate the genocide in the A-stan; Muslims are very proud of their genocides. It could be because part of removing the Hindu population of area was herding thousands of Hindu slaves across those peaks where many died. Or it could have been just as a threat to the rest of India.

I find leftists who like to blame all Muslim violence on the West (“You provoked them with the Crusades!!!!” while ignoring the 400 years of Jihad that preceded it) and American foreign policy don’t know what to do when you throw the history of India in their faces. The Indians had done nothing to them. The Muslims invaded only because the India was wealthy, and they wanted to plunder it. And when they did, Muslim generals competed to see who could build the highest mountain of skulls. Unlike the Jews and Christians the polytheistic Hindus didn’t have the option of submitting and paying the Jizya (at first, at least, later the Muslim rulers became addicted to the tax revenue) so the Indian’s only option was to fight to the death. Which produced some of the greatest warriors who ever lived.

Here’s probably the most lopsided last stand you never heard of, but should have. It’s still the anniversary month.

“Saragarhi is the incredible story of 21 men of the 36th Sikh Regiment (currently the 4th Sikh Regiment) who gave up their lives in devotion to their duty. This battle, like many others fought by the Sikhs, highlights the heroic action by a small detachment of Sikh soldiers against heavy odds. This encounter took place on 12 September 1897 in the Tirah region of North-West Frontier Province (now in Pakistan, which then formed part of British India). In keeping with the tradition of the Sikh Army, they fought to the death rather than surrender.

The Battle at Saragarhi is one of eight stories of collective bravery published by UNESCO (United Nations Educational, Scientific and Cultural Organization). It has been mentioned as one of the five most significant events of its kind in the world which includes the Battle of Thermopylae associated with the heroic stand of a small Greek force against the mighty Persian Army of Xerxes I in 480 B.C.”

The invading Pashtuns admitted to losing 181 dead, which if I I were one of 21 men who had to sell my life I would consider I extracted a high price. But the relief column that arrived from the closest outpost (too late for the Sikhs, obviously) said they saw approximately six hundred bodies littering the battlefield.

I wouldn’t rate the Indian special forces with US special forces, UK/Commonwealth SAS/SBS, IDF, or the German GSG-9. Unless the Russians have improved, though, based upon what the world saw at Beslan and the Moscow theater I’d rank India’s naval commandos MARCOS (who were brought in to assist during the Mumbai terror attack) ahead of the Russians, at least. I have no opinion on the Indian army paras or their Air force SOF.

It isn’t that I doubt their toughness or professionalism. It takes money to train to the level of US tier 1 special forces (or foreign equivalent). So while DEVGRU or AUS SAS considers losing a single hostage a failure, most of the rest of world considers it a successful operation if they cordon off the area and kill all the bad guys, the hostages being an after thought. My impression was for MARCOS it wasn’t entirely an afterthought.

No, I wasn’t SPECWAR. I was intel. I have worked with SEALs. Mostly fetching felt pens for mission planning.

I unintentionally blurred the lines. Obviously what the Indian special forces, no doubt the army Paras, conducted was not hostage rescue but direct action. Since everything in the kill zone was a valid target, I’m sure the Indians were as up to the task as any other unit including our own. You don’t need something like DEVGRU for that.

I was thinking of the Amenas gas plant attack back in 2013, and I was trying to draw a distinction. Algerian SOF were clearly superior to AQ-linked terrorists they engaged with. They simply overwhelmed them. They trained to that level. But they didn’t train to the higher level that US, UK, CAN, AUS, NZ, etc., SOF train. Because they can’t. They don’t have the budget or the facilities. So a lot of hostages were killed. By US standards it was a failure. But had it been just a direct action against the Jihadis, it would have been by any standard an outstanding operation. Algeria can’t afford our standards.

I wonder what it would be like to have an American leader with brains and cajones that wasn’t in the pocket of the Saudis.

At least their leaders have balls!