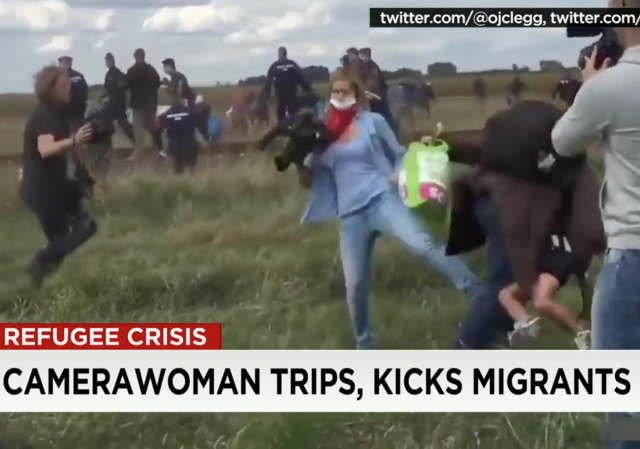 Seems this woman was in the wrong line of work.

A Hungarian camerawoman was charged with “breach of peace” for tripping and kicking migrants.

The camerawoman seen on video tripping fleeing migrants in Hungary was charged Wednesday with “breach of peace” by the public prosecutor’s office in the southern Hungarian city of Szeged.

According to the chief prosecutor, the woman did not inflict any physical injuries, but her behavior was “capable of provoking indignation and outcry in the members of the public present at the scenes.”

Video footage of the incident caused outrage in September 2015 after it showed the camerawoman tripping a man running with a child in his arms.
It happened after around 400 migrants broke through a police line in a holding camp outside Szeged.

Petra Laszlo, who was documenting the migrant story for the Hungarian nationalist N1TV station, apologized a few days later in a letter to the Magyar Nemzet newspaper. She said the ensuing panic scared her and made her think she would be attacked. “As I re-watch the film, it seems as it was not even me,” her letter said.
N1TV fired the videographer after the incident, Editor-in-Chief Szabolcs Kisberk said.

“The camera operator behavior was completely unacceptable,” N1TV said in a statement at the time.