Commissioner will testify next Wednesday for the Judiciary Committee. 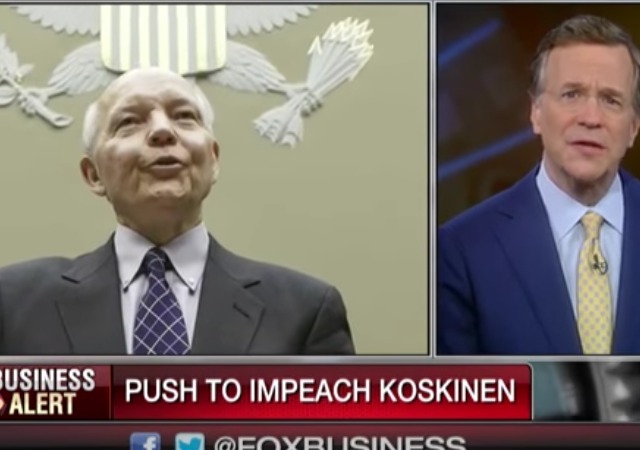 The caucus had submitted a resolution to impeach Koskinen for impeding “Congress’ effort to investigate the IRS for tough assessments of Tea Party groups that sought tax exemptions several years ago.” Caucus members Members claim Koskinen failed to provide proper email documents and lied about deleting some emails. They also claim he has shown, “little effort to recover the lost documents.”

Rep. John Fleming (R-LA) introduced the bill “under a privileged motion,” allowing the bill to bypass committee. However, their idea for impeachment did not sit well with other Republicans who thought that this “vote two months before elections risked irritating voters.”

Politico reports that Rep. Trey Gowdy (R-SC) worked on the deal with Freedom Caucus co-founder Rep. Mark Meadows (R-NC) before he sat down with Goodlatte and then Freedom Caucus Chairman Jim Jordan (R-OH). After those meetings, Goodlatte and Jordan met to broker the deal.

Instead, Koskinen will testify before the Judiciary Committee on Wednesday next week. An impeachment vote would instead take place after the presidential elections in November.

While they won’t get their impeachment vote, the caucus is pleased with the decision:

“The House Judiciary Committee will finally hold impeachment proceedings of IRS Commissioner John Koskinen next Wednesday,” the Freedom Caucus said in a statement. “This hearing will give every American the opportunity to hear John Koskinen answer under oath why he misled Congress, allowed evidence pertinent to an investigation to be destroyed, and defied Congressional subpoenas and preservation orders.”

If the impeachment vote passes a House vote and makes it to the Senate, it is sure to die there. The GOP doesn’t hold a large enough majority in the Senate and would need bipartisan support to receive the two-thirds vote it needs to pass.

The administration brought in Koskinen to “clean up” after news broke of the IRS targeting conservative groups. His relationship with Republicans soured after the destruction of “backup tapes containing emails by key official Lois Lerner” during the investigation. Roll Call reported:

Fleming said Koskinen had made a “series of false and misleading statements” to House investigators and failed to fully cooperate with their requests for emails and other information related to a probe of the IRS’ handling of applications from conservative groups seeking tax-exempt status.

Fleming, who is running for the Senate, said Koskinen’s statements and actions “warrant impeachment, trial and removal from office.”

And now he will provide something other than lies and stone walls? Really?

And this is why Donald Trump is the nominee.

Exactly! Our Republicans are such a timid lot. They’d rather pass on helping elect someone who’ll upset the apple cart, preferring to settle for ‘right to whine’ for 8 years. Until they’re silenced by the Clintons and their pals. Bah!

At what point do people like this guy start showing up in DC hospitals with their faces bashed in? It’s a question, not an exhortation.

Oh boy! Koskinen had better watch out now! The boys from the House are after him and we all know what a bunch of tough guys they are! Hell, the last IT guy for hillary didn’t even bother to show up for the mandatory hearing. His lawyers told the House committee to go to hell.

And Lucy pulls the football out from in front of Charlie Brown.

In Baltimore lower court, Officer Porter was compelled to testify and not granted immunity. I guess that kind of bullshit only works in a corrupt backwards place like Baltimore.

What on earth are you talking about? Porter was given immunity, just like anyone else who is compelled to testify.

“If the impeachment vote passes a House vote and makes it to the Senate, it is sure to die there. The GOP doesn’t hold a large enough majority in the Senate and would need bipartisan support to receive the two-thirds vote it needs to pass.”

No… this is technically incorrect.

Impeachment is the sole prerogative of the HOUSE.

If it passes by a SIMPLE majority, the constitution mandates a separate trial in the Senate. It can’t “die” there. He may be found not guilty but it’s not going away on a simple vote.

It has to happen. It’s an actual trial. Evidence is presented. It’s all out in the open. I fail to see how evidence of malfeasance against political groups based on their political leanings is a bad thing for governance.

Spineless Republicans! Is it any wonder why 14 million people voted for Trump?

The Republicans have been doing the same thing for the last 8 years.

The Dems think the House Republican committees are nothing but a joke and that is the way they treat them!

“The Republicans have been doing the same thing for the last 8 years.”

The GOPe has been doing this for a HELL of a lot longer than 8 years. They still think they can “get along and be friends” with the demonrats.

Long past due for scorched earth policy. This is why Trump is doing well with the “deplorables”.

Do you not understand why no one takes you seriously?