“As Secretary, how many words per minute did you type, and how does President Obama like his coffee, like himself? Weak.” 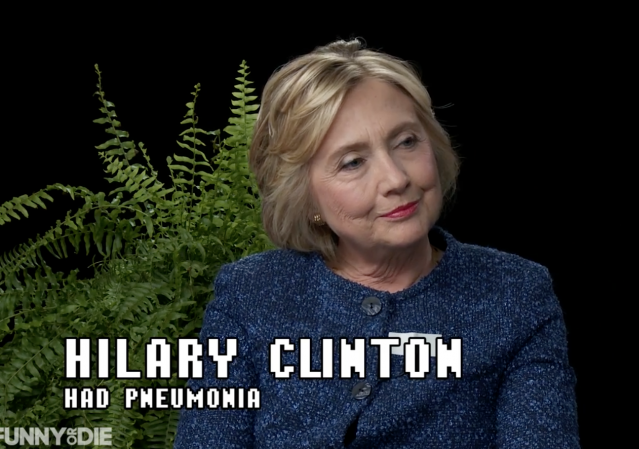 Hillary is having trouble shoring up the millennial vote. In what appears to be an effort to reach a younger demographic, Hillary joined Zach Galifinakis on ‘Between Two Ferns’, an interview short published on the website Funny or Die.

‘Between Two Ferns’ interviews tend to be deadpan and self-deprecating, but this was just… bad. Bad for Hillary anyway.

Between Two Ferns With Zach Galifianakis: Hillary Clinton from Funny Or Die

“Not to take away from the historic significance of you perhaps becoming the first female president, but for a younger, younger generation, you will also become their first white president and that’s pretty neat, too.”

“As Secretary, how many words per minute did you type, and how does President Obama like his coffee, like himself? Weak.”

“What happens if you become president? Are we going to be stuck with Tim Kaine for nine months? How does this work?”

“So you’re gonna lead the Civil War?” “No, I wouldn’t take up arms. That think that might be a little extreme.” “Right, because you were saying before we were rolling that you wanted to take away everyone’s guns. Very cool.”

“I’d love to meet the person who makes your pants suits. Because for Halloween I wanted to go as a librarian from outer space.”

“This has been a lot of fun, Mrs. Clinton. We should stay in touch. What’s the best way to reach you? Email?”

Not sure how this will help Hillary with the youngsters, but it was bad enough that I almost felt sorry for her. Almost.

She would have reached far more youth if she asked, “Where’s Perry?”

Wish they would have included a blood pressure readout.

Oh my god, her charisma was beaming off the screen. Beaming Jerry! Beaming I tell you!

Ah, yes, an “elite” makes an appearance which is hardly worth a tweet!

I heard him ask “What happens if you become PREGNANT” which makes the Tim Kaine and 9 months make some sense.

Playing the Trump commercial near the end was hilarious!

I admit I laughed a few times. She really looked like she was trying hard to be a good sport. There must’ve been a ton of downtime and coaching. And she still looks completely unnatural.

It’s not often that I disagree with you, but that was an awesome interview. It’s Between Two Ferns, it’s not supposed to be dignified and Clinton really pulled it off.

I mean, seriously, I think Bill should’ve been ejected from office and Hillary is fundamentally disqualified because she lacks basic reading comprehension (see her views on the Constitution), but that’s absolutely the best interview she could have had there and I can’t see it hurting her at all.

In fact, I’ve forwarded it to a couple friends who I know will probably vote for her, because they’ll enjoy it. I certainly did.

I’m with fern.
Feel the fern.

Okay, now the bad puns are over. How does
this help?

Maybe the email line, gun line, “pneumonia”‘ reminder and Trump ad don’t hurt her – he shows more energy in 15 seconds than she does in 5 minutes – but almost nothing here persuades the undecideds.

Not a good look for overcoming an aloof image.

As I’ve consistently said since her Senate runs in NY, Hillary is an awful candidate. She lacks Bill’s charm & personability completely.

It is obvious she considers herself elite and above the rest of us. She always has. Recall when some of her Hillarycare provisions in ’93 threatened to bankrupt many small businesses with mandated costs, she snapped, “I can’t be responsible for every under-capitalized small business in America!” She doesn’t care about anyone but herself.

That said, it’s criminal that young people – or anyone – would base any part of their vote on a candidate’s appearance on a comedy program. Such people should not have the vote; they are not mature enough to exercise the privilege responsibly.

During her 2008 run she visited the GM assembly plant in Lordstown, OH. The last process of production is physically getting into the car and driving it off the line. They asked her if she wanted to drive one off; she declined and remarked that she hadn’t driven a car in 20 years…

As far as I am concerned this was a complete failure!
Why would it pull the millennial vote to Crooked Hillary?

That’s the funniest thing I’ve seen since before we talked about Donald Trump all day. What was that, like 2 years ago?

The first thing that came to my mind was Nigel Farage’s quote when he was dressing down one of the Eurocrats:

“You’ve got the charisma of a damp rag and the appearance of a low grade bank clerk.”

The fact there were no cackles to some of Galiflanakis’ genuinely funny lines makes me think her stiffness was exaggerated and intended as part of the bit. But man, the slouching, somber, deadpan Hillary wasn’t a good look.

I also thought about the contrast to Trump, who smiled and laughed and hammed it up while Fallon messed up his trademark hair.

Bravo. Just reflecting back on Farage’s enfilade directed at the EU parliament’s lackeys and posers gets my day off to a good start. The world would have had a better script if Henry Fielding had written it. He would have done a great job on Clinton, who would have qualified as a Great Woman in the caste of his admiration for Great Men.
Galiflanakis took her to the wire and she failed the test. Where Trump was an open hand, she was a closed fist.

I laughed. Quite a bit actually. Does it help her? Hurt her? I don’t know, I don’t really think so. She at least did a good job making her actions look natural. I would assume she knew they would run a Trump ad for example, but I’m surprised she went with it, even for comedy. I can’t see anyone switching their vote over this, it doesn’t make her more relatable or anything.

This was not rehearsed and she did not know that he was going to play a Trump commercial. What fun is that. Obama was given the list of questions two minutes before airtime. Hillary they say no. Her camp is now claiming that it was her idea. I don’t believe that and I think they just fished two millennial staffers out of the Hudson. She probably was instructed to remain straight-faced as part of the schtick. Obama had the same look so it couldn’t be a coincidence.

With that said – she looked terrible. No matter how she was instructed to react, her hair was mussed, her face was drawn, her posture was awful. If this was the best her make up people could do, she must really be in bad shape.

Undertakers do the best with the canvas they’re given. Don’t be too harsh.

I’ve known many older progressives who see themselves as political minders to the point where they can’t even laugh at a joke until they’ve thought about it for twenty minutes to see if its somehow mocking some left-wing principle or interest group. In the show Hillary came across the exact same way. Z.G. made her look like a fool honestly. He’s a little like early Letterman where he can make himself look like a idiot, yet at the same time make someone else look even worse.