@HillaryEarPiece must be ringing with the news of the Trump win! 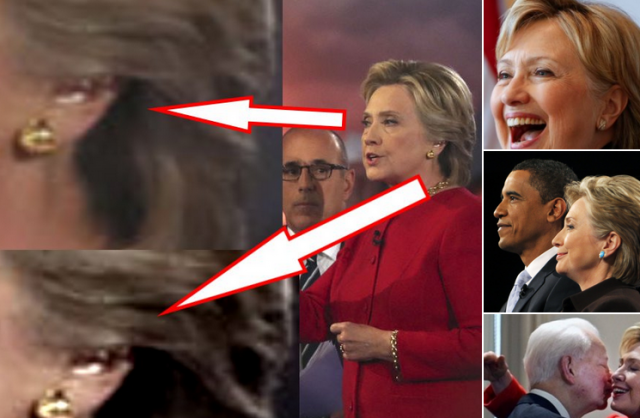 President Obama has TOTUS (Telepromter of the United States) and his wife has Michelle Obama’s Mirror.

After the Commander In Chief Forum hosted by NBC and moderated by Matt Lauer, a new social media star has been born: Hillary’s Ear Piece.

She can’t even #lie without help from a gaggle of other #liars through an earpiece @HillaryClinton #HillarysEarpiece pic.twitter.com/YIMVd72SjH

It became a trending topic on Twitter last night:

This development did not make the progressive crew at Twitter too happy:

The WikiLeaks’ leaked emails beween Clinton Aide Huma Abedin and the Democratic presidential candidate confirm that the ear piece is, indeed, one of Hillary’s many devices. 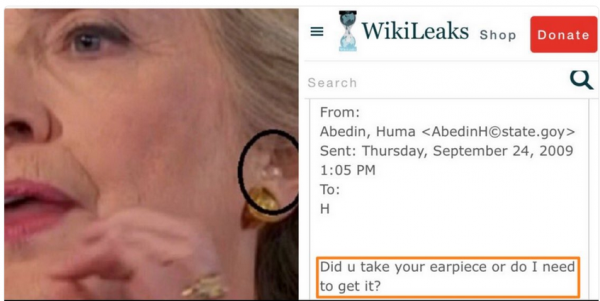 The fact that it is real is a good thing, too. @HillarysEarPiece now has its own Twitter account (at least for the time being).

Last night had to act like deleting C from subject made classifiedinfo okay&hadto act like my addit. Input wasn’t C. Phew,close one @MLauer

Needless to say, there was much speculation about the ear piece and it’s role in the forum. One report offers the following assessment from New York Police Department officials.

Sources at the New York Police Department told True Pundit Hillary wore an “inductive earpiece” to receive feedback from her handlers during the forum, where she was grilled on why she compromised national security with her use of an secret unsecured email server.

NYPD insiders say Hillary’s earpiece is similar to the type widely used by Broadway actors to get fed lines when they forget their script during a live performance.

No matter the reason for the device being in the ear, the response of the elite media this morning clearly indicates that Hillary Clinton’s performance during the forum was…weak.

The intensity of media hate toward Matt Lauer can only mean that Hillary embarrassed herself and Trump didn’t.#caring#SoOld#SoSick

Lol Gingrich: “You can tell how bad the debate was for Hillary because the NYT today attacked Matt Lauer.” https://t.co/MLUlSZemWb

Here is a scathing video review of Lauer’s moderation posted in USA Today, which confirms my observation that Matt Lauer was tough on both candidates last night.

After mulling over the forum last night over a cup of morning coffee, I have concluded that those who thought Lauer questioned Trump more are correct. However, it is because the GOP presidential hopeful actually answered the questions directly. Clinton, on the other hand, babbled a heady mix of excuses, rationalizations, prevarications, and wonkisms to run-out-the-clock and limit the number of queries she had to address.

I was blessed to be able to watch the forum with a veteran of the U.S. Army Special Forces, Barry C. Jacobsen. He was especially interested in seeing how Clinton addressed the steady stream of information coming out from both the FBI and WikiLeaks that indicate she has been clearly lying about many issues.

Here is his assessment:

“Trump clearly won the match. Hillary Clinton was on the defensive the entire time. Trump’s tone and body language indicate he was comfortable in that arena, willing to address Lauer’s questions, and happy to respond to the regular people in the audience. At this point, most voters will see Trump as a plausible President.”

In this phase of the election, Americans are trying to determine which of the two candidates is more presidential.

@HillaryEarPiece must be ringing after hearing the news of Trump’s triumph in this pre-debate showdown!

I suspect it was a bug.

Anyone remember Star Trek II: The Wrath of Khan?

Great reference, especially since this is Star Trek’s 50th anniversary. 😀

Wow. Kurt Schlichter will be both surprised and horrified to know that ANYBODY considers him “elite media”.

Amazing, Leslie. You move from one excess to another.

Would be good to re-read that paragraph, Rags. 😉

So, instead of the Schlichter reference being…just weird…it was supposed to be derivative?

I guess I’d have used first-hand quotes to make my point.

Perhaps…but in your rush to judgement about my post, you have misread the tweet reference. I clearly was showing Schlichter’s remark ABOUT the media response. The media meltdown has been astonishing.

I am still at the Bar Car, and it’s amazing how many people are now streaming in. I have really enjoyed seeing the turnaround.

I’ve already poured you a big, tall drink called “Perspective”, which I suggest you consume before too long.

Levin will hold his nose and vote for a guy he recognizes as a stinking, lying, pathological Collectivist thug.

Because, in his accounting, Hellary is THAT bad.

But he’s not on your train, dear. And he’s not drinking your Koolaid.

And there are those of us who just won’t vote for a Collectivist. You can. And you can do the whole pom-pom routine for him.

That’s okay. Only 1/3rd of the population were patriots supporting the War of Independence. We’ll just have to carry your dead weight to victory.

For the rest of humanity:

None of the revolutionaries were cultists. They were idealists.

I’ll carry your dead weight until you wake up.

That video has be laughing so hard, tears are streaming from my eyes. Thank you so much for the best laugh I have had this week.

Good think I know how to dance Bollywood…I would fit right in.

Rags, proving the “Anger” stage of the Kubler-Ross Grief cycle is the hardest to overcome. 😀

Say it with me, Leslie: “Mark Levin is NOT on the ‘T-rump Train’. He says he’ll vote for T-rump, but only because Hellary is SOOOOOOOO terrible. He STILL thinks T-rump is a Collectivist liar, bullshitter, and nutter.”

It was Flavor Aid, Rags, not Kool-Aid. A minor detail, but accuracy is important if you want people to buy your argument.

“Levin will hold his nose and vote for a guy he recognizes as a stinking, lying, pathological Collectivist thug.”

In other words, like you, he has no principles.

I understand his thinking, while disagreeing with it.

“TRUMP is NOT a CONSERVATIVE”.

Indeed, he’s a Nationalist Populist…or Collectivist, as Levin has explicated at length.

You’re a lying liar who lies. Like your Great God Cheeto.

Deal with the Levin actuality, or STFU.

Certainly Trump is a Populist… in the vein of Teddy Roosevelt.

Yes. ANOTHER Progressive, and terrible POTUS who STILL damages the Republic.

Well if the Cruz prophesy is true Levin will rise in 3 days after making the announcement.

You people are insane.

“Amazing, Leslie. You move from one excess to another.”

Whereas you remain consistent: You are consistently an ass.

Whatever this gadget is its very likely been hacked and the results will be on Wikileaks shortly.

Now that is an entrancing idea!

This is good for the leftoids. Now that the puppet strings have been detected, when Hillary’s fallen and can’t get up, they can blame her handlers.

But why didn’t they try harder to disguise her cyborg attachments? Now whenever something odd happens, and is seen by millions of viewers out here in TV land, we’ll suspect remote manipulation … maybe some sort of medication-delivery device triggered from her secret headquarters.

These cheesy low-rent InfoWars-style blogs you’re quoting from and pretending are serious, respectable sources are an embarrassment.

This site used to have higher standards than that.

So, by default, we are of the same quality as Fox News…which I view as a testament to the quality of this team.

The what you call ‘low rent’ Infowars website has yet to be wrong.

It was they who rang the alarm on most of the top political concerns.

Fox, while light years better than CNN, is a step behind the conservative blogs in getting out breaking stories. (Unless you’re blonde, missing or murdered.)

After all the years of everyone around Hillary mumbling under their breath “stick it in your ear, bitch” she did and now everyone is questioning it.

So many uniformed posters (and sadly perhaps the OP/Host). And perhaps more than a few sexists. While rather uncommon for a male to wear close fitting earrings (anyone see the photo of Mr. Trump with what WAS some sort of an ear bud devise?), women DO.. This was posted a good half day after this was already Fact-Checked. Guess what? Unlike Mr. Trump’s unexplained ear-bud, this was an earring. 1) Hillary Clinton Wore ‘Secret Earpiece’ During Commander-in-Chief Forum http://www.snopes.com/hillary-clinton-secret-earpiece/ 2) Hillary Clinton Did Not Wear An Earpiece: Here Are Close-Up Pictures To Prove It http://thebea.st/2cJcxbf 3) Trump Jr. pushes Alex Jones’ insane ‘Clinton earpiece’ conspiracy – and the internet rips him apart http://www.rawstory.com/2016/09/trump-jr-pushes-alex-jones-insane-clinton-earpiece-conspiracy-and-the-internet-rips-him-apart/#.V9H-VQcmIFM.twitter 4) Trump’s campaign is promoting yet another bizarre Hillary Clinton conspiracy http://www.huffingtonpost.com/entry/hillary-clinton-conspiracy-theory_us_57d17cb7e4b03d2d4598cfab

Oh my god…go back to your safe zone snowflake! Questioning whether a candidate is fit for the highest office on the planet IS NOT SEXISM!

Get that through your thick skull. Questioning someones competence IS NOT SEXISM. Neither is questioning their health or whether they have lied about Americans being killed in Libya.

Try and deflect as much as you want but that will not make the questions go away. Why Did HRC wire herself up for this farce we have come to call the first Presidential debate.

Your theory is that Clinton was wearing an earring inside her ear? Really?

There was a tiny little piece of dirt in there, so she is growing a cultured pearl.

I’m not positive but it looks more like a mushroom to me.

While I’m here I have a question for Hillary.

Mrs. Clinton the world is dying to know….
Is it bikini or thong?

So, anyone sat in a townhall forum with Hillary with a miniature radio receiver (assuming you get it by the Secret Service) to prove that thing in her ear is a hearing aid or also a radio receiver?

Remember, Trumpkins! When you’re stocking up on tinfoil supplies, be sure to do it through the good professor’s Amazon link.

He may as well profit from all this insanity he’s hosting.

Donald Trump and his supporters are not imagining that something was in Hillary’s ear during the event. It’s either a hearing aid (and she’s been concealing a physical disability that could be related to her head trauma) or it’s a device used to coach her during the event. No tinfoil hats are necessary.

I love this blog. Calling names is just rude and doesn’t further your position.

Look at the screen capture of the supposed email from Huma Abedin. Instead of “state.gov” it says state.GOY

It makes me question the authenticity of that particular wikileaked email

Also, the context of that "earpiece" email @wikileaks left out? She was at the UN that day. https://t.co/Nz0kCgqvGQ pic.twitter.com/QOlDyUKPLb— Parker Molloy (@ParkerMolloy) September 8, 2016

Which is a pretty normal place to have an earpiece, but hey, that doesn't match @wikileaks propaganda, so… ¯_(ツ)_/¯— Parker Molloy (@ParkerMolloy) September 8, 2016

Could be brain matter.

Another meltdown of the neverTrump crowd at LI.

Anybody remember the comedy bit where David Letterman would have Hello Deli owner Rupert Gee out on the street asking people questions provided by Letterman via an earpiece?

Notice that Letterman has a lot of spare time on his hands nowadays.