Hamas MP: “The Jews Are The Vilest Nation in History”

Hamas MP: “The Jews Are The Vilest Nation in History”

Nothing out of the ordinary in this speech, and that’s the sick part. 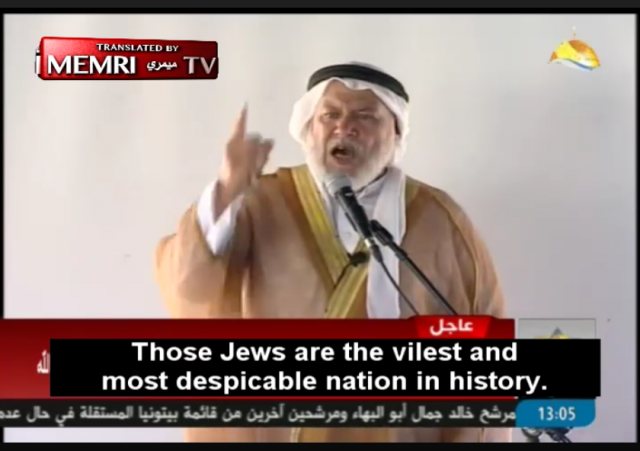 There is nothing shocking about this video, if you understand that Hamas’ goal is the destruction of Israel and the subjugation and death of the Jews.

But it’s important to document the types of statements made regularly along these lines.

Hamas MP Marwan Abu Ras in a Friday Sermon: The Jews Are “the Vilest Nation in History”

In a Friday sermon delivered in Gaza on August 26, Hamas MP lambasted the Saudi delegation, headed by retired Saudi general Dr. Anwar Eshki, which had visited Israel in July to promote the Arab peace initiative.

“You are a supporter of the Jews, even if you came from the Land of the Two Holy Mosques,” he said, calling the Jews “the vilest and most despicable nation in history,” who “betray everyone” and “never abide by any pace they make.”

The sermon was broadcast by the Hamas-owned Al-Aqsa TV channel.

It is amazing how the vilest, most hateful killers always find someone else to blame for themselves. They never take responsibility for themselves. The idea that you will find a special place in heaven for killing innocents ar killing arbitrarily is in itself vile and unredeemingly evil.