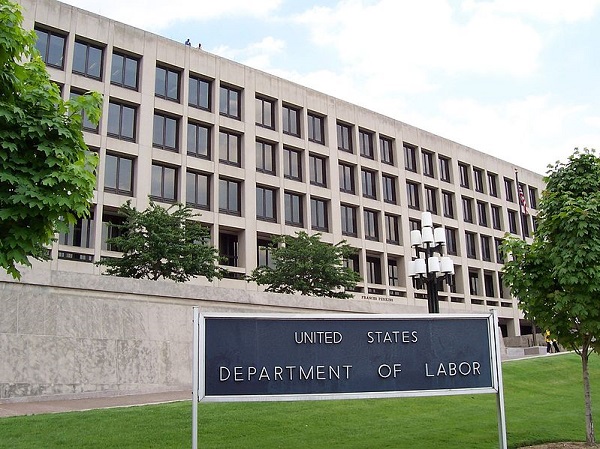 According to a report by the Bureau of Labor Statistics, the number of local, state, and federal government workers in the U. S. exceeds the number of those working in the manufacturing sector by almost 10 million.

Government employees in the United States outnumber manufacturing employees by 9,932,000, according to data released today by the Bureau of Labor Statistics.

The BLS has published seasonally-adjusted month-by-month employment data for both government and manufacturing going back to 1939. For half a century—from January 1939 through July 1989—manufacturing employment always exceeded government employment in the United States, according to these numbers. 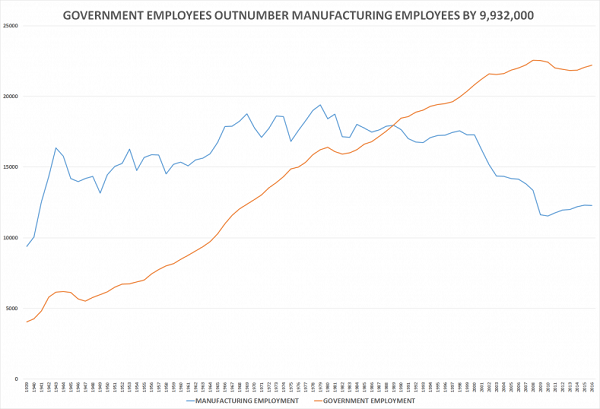 The first time that U. S. manufacturing workers were outnumbered by government workers was in 1989.

Manufacturing employment in the United States had peaked a decade before that in June 1979 at 19,553,000

Manufacturing output of the U.S. is at an all-time high.

Manufacturing employment in the U.S. is declining.

Why? Mostly because of automation. And this is also true of every developed nation in the world. Every. One.

Just as our agricultural employment keeps declining, despite record production. Very few of us are employed in delivering ice to homes any longer, or coal, or milk.

This is why, when Der Donald tells you he’s bringing jobs back to America, he’s a lying sack of excrement. He isn’t. And most Americans don’t want a job snapping screens onto smart phones…that they could never afford at our wage rates.

On the other hand, we CAN and BETTER trim the hell out of government employment. These people are COUNTER productive.

Yep. Part of me dies every time I think about how I have a state job, but it’s a pretty nice gig. I’m a teacher and I make enough to live on by working 180 days a year. I’ve worked agriculture (strawberries and cows) and I can safely say I really don’t want that to be the way I earn money for the rest of my life.

Your post is absolutely wrong. I see “made in china” on items that once were made here (overbearing regulation and taxation).

Most jobs are not as automated as you state. Some jobs cannot be automated. Those jobs were once held by USA citizens; they are now in other countries.

Automation in some industries has left this country (again, taxes, regulations, unions, etc.)

In other words, Rag, you are a “lying sack of excrement.”

Many of these are union jobs, this, to the left, is a feature, not a bug.

Could we get that as a ‘Per-Capita’ graph please? I suspect that will make the government jobs (which includes *all* government jobs, such as police, fire, water, sewer, customs, military, etc…) look better, but the real employment numbers (from which the tax dollars are extracted to pay for the rest) look horrible. Horrible-er.

the only thing the US manufactures anymore is red tape…

If you’re not part of the solution, there’s money to be made in exacerbating the problem.