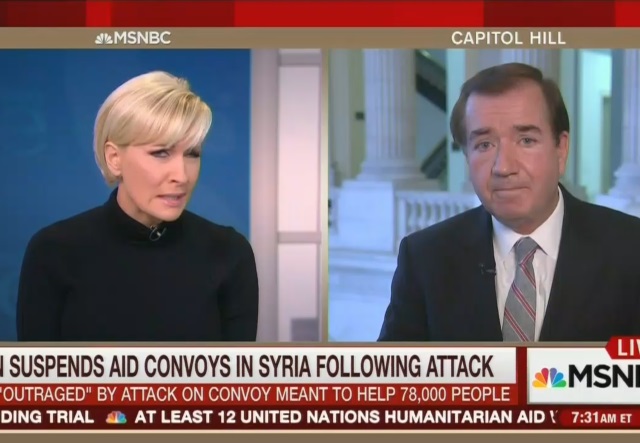 Republican congressman Ed Royce, Chairman of the House Foreign Affairs Committee, has to be one of the best-informed, well-spoken, reasonable, fairly non-partisan Members of Congress. So when Royce appeared on today’s Morning Joe to discuss the latest atrocity in Syria, in which the Assad regime barrel-bombed an aid convoy, he was initially given respectful “Mr. Chairman” treatment, until . . .

Royce had the audacity, responding to Andrea Mitchell’s question about Donald Trump’s “embrace of Vladimir Putin,” to refer to Hillary Clinton’s failed “Russian reset.” That set Mika Brzezinski off. After an “oh, wow” of incredulity, Mika demanded “can we at least be on the same planet here?”

Can anyone remember the last time a leading Dem member of congress was treated so disrespectfully on MNSBC?

Note: Mika’s “same planet” insult didn’t cause Royce to lose his courteous cool, and he responded substantively with details of a bi-partisan proposal he has authored to bring pressure on Putin.

ANDREA MITCHELL: Mr. Chairman, this was, according to the State Department, a double-tap air strike. There were two air strikes after the initial hits, which went after the rescue workers, first responders. Clearly, it’s something approaching a war crime if not already a war crime, and with Russian backing because Russia is the guarantor of this, as you’ve been pointing out, of what the regime does. Only Russia and the regime have airplanes there. So how comfortable are you with the Republican nominee, Donald Trump’s embrace of Vladimir Putin? Won’t it be more difficult —

MITCHELL: — if he is elected, to get any pushback against Russia?

ED ROYCE: You know, I’ve seen every presidential candidate do this, reach out and claim that they were going to do a reset with Putin, that they’re going to be able —

I doubt Royce has the time or the interest in travelling to whatever planet crazy Mika lives on. It’s way too far out there.

Surely the bus doesn’t go that far. There are a large number of people who just shouldn’t try to discuss things more complicated that oatmeal cookie recipes and unfortunately most of them are members of the msm.

MSM translation: “Let’s play Russian Reset! The next best thing to Russian Roulette because we are hoping its political suicide instead.”

Royce translation: “Not going there.”

I generally HATE these bsNBC posts, but this one was worth it to discover the highly developed Mika stink-eye.

Glad you enjoyed the screengrab: my editor Kemberlee and I also got a chuckle out of it. Perfectly captured the moment in a hilarious way!

The video is WAY better. Play with the sound off!

What really needs a “reset” is MSNBC along with Brzezinski who is just as inept as is her incompetent father.

IOW, a total waste of my time!

I took your suggestion: Mika’s looks of puzzled outrage were very entertaining. Didn’t notice the full gamut of her expressions as I was creating the clip.

What a blatant cultist, and in turn, propagandist.

But as Sigmund Freud or Carl Jung might say about Brezinski: she’s a dumbass.

With qualifications like “dumb ass” why isn’t she a cabinet minister in jugears administration? The position of Attorney General must have already have been filled.

Give credit where it is due. Obama and his heir apparent, Clinton, successfully reset the cold war. Although, the Russians are not the Soviets, and they have been remarkably patient and conservative in the face of progressive provocations.

Perhaps, but the only difference between the Soviets and the current Russia is the absence of State atheism.

Well, and crony capitalism with approved oligarchs. Like New York.

The biggest difference is that the pervasive Russian paranoia of the Soviet era is pretty much gone. Nationalism, xenophobia, and chauvinism are still there, but not in unusually odious amounts.

Centuries of Russian experience with the Varangians, the Livonians, the Latvians, the Estonians, the Turks, the Tartars, the Mongols, the Poles, the Swedes, the French, the Japanese, and the Germans had conditioned the Russian consciousness to equate “foreign relations” with “get ready for a whack over the head”. Ronald Reagan broke that cycle—perhaps his greatest accomplishment, and one for which he’s yet to get full credit. (Of course he didn’t do it all by himself; he had help, much of it from the Soviet side of the fence.)

Modern Russia has settled down to the routine business of being a Great Power. It will always be one of the Great Powers, no matter who happens to be in charge. But it’s not perpetually suspicious and reflexively hostile.

“Resets” are misguided attempts at shortcuts. Relations among great powers are gradual and long-term processes.

I just wish she’d go back to her home planet wherever it is out there. Hopefully not in the Milky Way.